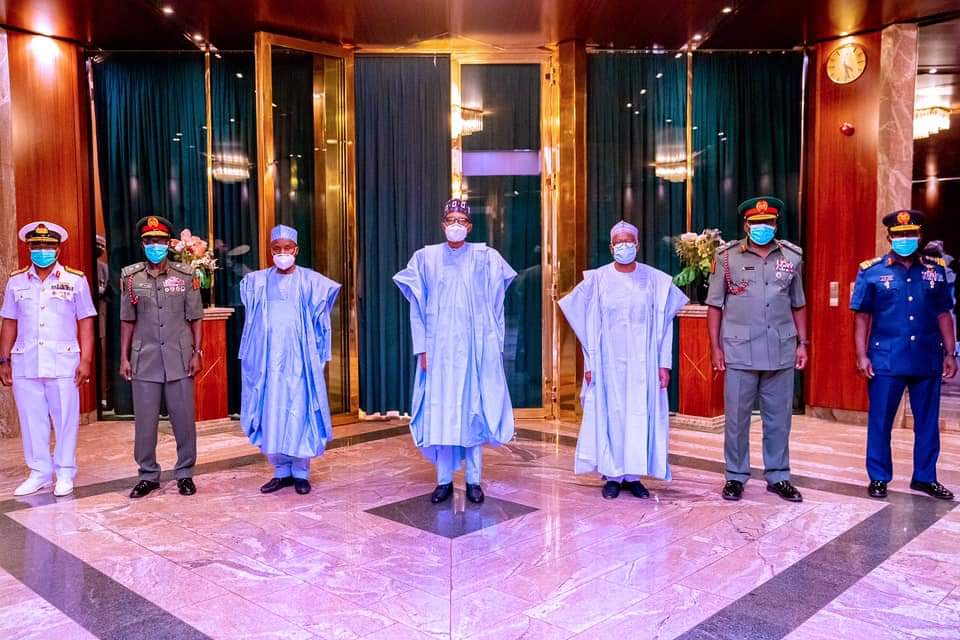 This comes as the immediate past Chief of Defence Staff, General Abayomi Olonisakin, said his successor, Major General Lucky Irabor, was the best choice to lead the military in view of his outstanding achievements in the military.

His position is coming as the immediate past Chief of Army Staff, Lt. General Tukur Buratai, was pulled out in a colourful ceremony even as he called on the new Army chief to rid the North-east of the vestiges of terrorism.

The former service chiefs performed the ceremonial inspection of guard of honour, signing of handover notes and handover of command flags to their successors.
Speaking at the handover ceremony, General Olonisakin said there could not have been a better choice to lead the army than Major General Irabor.

“It gladdens my heart that the incoming Chief of Defence Staff is very familiar with these security challenges having previously served as Theatre Commander, Operation Lafiya Dole, Commander Multinational Joint Task Force and above all, the immediate past Chief of Training and Operations at the Defence Headquarters.
“There couldn’t have been a better choice of a seasoned senior officer who will hit the ground running as the Chief of Defence Staff,” he said.

Responding, the new CDS, Irabor, said the security landscape of the country was familiar to him, adding that all new service chiefs had been part of the effort to address the security challenges facing the country.
He commended the former defence chief for the purposeful leadership he provided during his period as CDS.
Irabor, however, called on all Nigerians to join hands and support the military in the quest to ensure that peace and security returned to every part of the country.

He also pledged to provide the right leadership and ambience for the members of the armed forces to perform their duties effectively.
Irabor thanked President Buhari for considering him fit for the appointment as CDS and pledged to hit the ground running.

“Let me on this note thank the former Chief of Defence Staff and the former service chiefs for their various contributions throughout their tenure in office.
“Let me at this time invite every Nigerian to please join effort to support us and indeed members of the armed forces and other security agencies in ensuring that security return to every nook and cranny of our dear country,” he said.
In his remarks during the handover ceremony, the former Chief of Naval Staff, Vice Admiral Ibok-Ete Ekwe Ibas, took a swipe at bad eggs in the navy, who subvert the system at every opportunity.

“I refer to all those who mindlessly subvert the system at every opportunity. Our experiences in their treachery of connivance with some criminal elements, complicity in crime commission, negligence performance of duty permitting aggravation of cases in some instances,” he said.
“The disrepute to the institution of Nigerian Navy in their less than professional conduct through alleged unethical behaviour,” he said urging such personnel to turn a new leaf.

Meanwhile, the newly appointed Chief of the Air Staff (CAS), Air Vice Marshal (AVM) Oladayo Amao, has assured Nigerians that the Nigerian Air Force (NAF), in synergy with sister services and other security agencies, would do its best to provide the support and security necessary for the nation’s development, whilst sparing no effort in discharging its constitutional responsibilities to the government and law-abiding citizens of the country.

The CAS made the assertion during a brief but colourful handing and taking over ceremony held at Headquarters NAF (HQ NAF), Abuja.

AVM Amao, who was appointed as the 21st CAS on 26 January 2021, noted that the NAF would sustainably and effectively employ air power in the protection of Nigeria’s people and interests, against all enemies of the state.

He pledged to continue the good work the former naval chief started and take it to higher heights.
Meanwhile, in his speech during a colourful pull out ceremony, the former army chief, Lt General Tukur Buratai, urged his successor, Major General Ibrahim Attahiru, to rid the North-east of the vestiges of terrorism.

He said he left the army better than he met it in terms of infrastructure development, standards, training, and improved welfare for personnel.