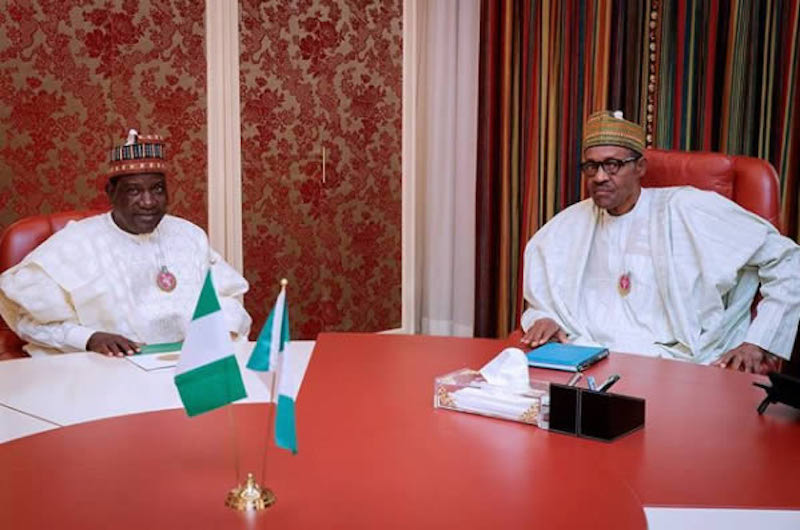 On the same day, the Sultan of Sokoto, Sa’ad Abubakar, charged the leadership of Miyetti Allah Cattle Breeders Association of Nigeria (MACBAN) to ensure their members respect the constituted authorities in any location they find themselves in the country.
Governor Lalong, who addressed reporters after a meeting with President Buhari, said the consultation centred on the imperatives of reviving the NLTP plan as soon as possible.

Lalong, who also doubles as Chairman of Northern Governors Forum (NGF), said the implementation of the plan would curb the farmers and herders clash, as well as the constant conflicts between herders and host communities.
He expressed concern that the farmers/herders clashes had continued to linger, stressing that the idea of the NLTP was to move away from the old practice of rearing cattle.

Lalong said: “Incidentally, I am a member of the Livestock Committee under the Vice President and I represent the North-central. That was the purpose of setting up that committee and that committee made far-reaching recommendations and then funds were to be made available to pilot states, Plateau and about nine states are pilot states, to address some of these issues.

“The issue was to move away from the old ways of rearing cows and to find modern ways of doing it. In some places, they will do it that way, but then in a confined environment, which was agreed to by all, and that is part of the point I was raising, to remind Mr. President to hasten the implementation of the National Livestock Transformation Plan (NLTP).

“We are still left with the herdsmen/farmers problem. The implementation of the NLTP will go a long way to address these issues.
“Whether we like it or not, we need cows and it’s also some people’s occupation, but where it leads to conflicts and raises hazards like insecurity, we have to address it.

“While we tolerate it, we must still address it because it is some people’s means of economic livelihood, but it shouldn’t be posing hazards or insecurity to anybody.”
The National Livestock Transformation Plan was established by the National Economic Council (NEC) under the leadership of Vice President Yemi Osinbajo in 2019.
During its launch in October 2019, Osinbajo had explained that the federal government would work with state governments, farmers, pastoralists and private investors, to modernize cattle rearing.

“In this plan the state government and the federal government do not and will not take any land from a state or local government, any participating state will provide the land as its own contribution to the project. The federal government merely supports the project.”
Lalong, on behalf of the northern governors, also commended President Buhari for replacing the Service Chiefs, saying the action further shows Buhari’s commitment towards addressing insecurity in the country.

He stated: “I came into the presidential villa in two respects; on behalf of the Northern Governors’ Forum and also as a state governor from Plateau State. I extended our felicitations to the President on a New Year and also congratulated and commended him for the steps he is taking in addressing insecurity in the country, especially in Northern Nigeria.

“The change of Service Chiefs is very commendable and also to remind him about some of the things left behind by their predecessors so that we can hasten and conclude them so as to make people safe.

“We have serious cases of banditry, kidnapping and so many issues of insecurity in the country. We will not expect that to continue. So, we are going to give maximum cooperation to the new Service Chiefs, while also commending the outgone ones for their roles in addressing issues of insecurity.”

However, speaking during the meeting yesterday, in Abuja, with MACBAN, the Sultan said “there is need to find workable solutions to address security and socioeconomic challenges confronting members of the association.”

The monarch, who is the chairman board of trustees of MACBAN, lamented the stereotyping of herders and how they are associated with crime.
The Sultan stated that it is not every criminality perpetrated in the country that is done by the Fulanis, while he urged herders to respect constituted authorities and shun all forms of acts capable of tarnishing their reputations.

Also, Usman Bugaje, a senior advisor to the Sultan, stated that the objective of the meeting was to ensure a genuine search for solutions to the entire problem affecting the Fulanis in the country.
“We are helping, at the secretariat level, to bring out the issues and see how we can look at other economic, social and even ethnic dimensions to the problems,” Bugaje said.

“And, there are timelines put to it, we have agreed that there will be timeline, we are not going to leave it open.
“We need to get it done within one year maximum from now if all the stakeholders are ready to cooperate.”

Baba Ngelzarma, national secretariat of MACBAN, urged the government to initiate programmes that would take idle pastoralist out of criminality and engage them in learning other skills in addition to cattle rearing.

“Even the cattle rearing are they getting money? Their cattle are not competing with the ones you have in other parts of the world that weigh 700 to 800 kilograms per cow,” Ngelzarma said.

He added: “The milk output is also not competing with the other ones in the world where one single cow is given an output 50 litres per day.
“We still hold the outdated species of the cow that are weighing not more than 100 to 120 kilograms and given out an output of milk that is not more than three to five litres per day.
“So, a lot need to be done by government, religious leaders, traditional rulers and pastoralist associations.”