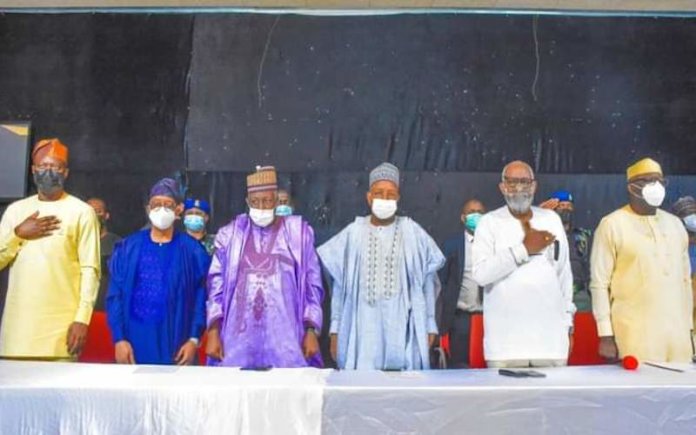 Chuks Okocha in Abuja, Mary Nnah in Lagos and James Sowole in Akure

Troubleshooting efforts to douse the tension generated by conflicts between herders and host communities, particularly in the South-west paid off yesterday as governors and the Miyetti Allah Cattle Breeders Association (MACBAN) rose from a meeting, agreeing to ban open grazing, including underage and night herding.

The governors, under the aegis of the Nigerian Governors’ Forum (NGF) and MACBAN, at the meeting in Akure, also agreed with the Ondo State Governor, Mr. Oluwarotimi Akeredolu (SAN), on issues that necessitated the issuance of a seven-day ultimatum asking unregistered herders to quit the state’s forest reserves.

MACBAN, the group that has been speaking for herders, until yesterday had opposed the ban on open grazing and insisted that it would alter the itinerary nature and culture of the herders, who for years, have roamed their cattle from the North to the South of the country.

It has also persistently opposed the idea of ranching for the same reason.
However, in a communiqué, issued at the end of the meeting, the NGF and the MACBAN agreed to end “free-range grazing” and kicked against the illegal occupation of forest reserves in states.
The meeting, at the instance of the presidency, was convened in the wake of the tension generated by Akeredolu’s deadline to illegal herdsmen to vacate the state’s forest reserves as part of precautions to combat kidnapping, robbery and murder, allegedly being perpetrated by the herders.

The meeting came just as a former Executive Secretary of the National Health Insurance Scheme (NHIS), Prof. Usman Yusuf, and a public affairs analyst, Col. Tony Nyiam (rtd), called on President Muhammadu Buhari to take responsibility for protecting lives and property of Nigerians, stressing that the increasing cases of kidnapping, banditry and criminality by herdsmen are signs of a failed government.

Chaired by the NGF Chairman and Governor of Ekiti State, Dr. Kayode Fayemi, the meeting was attended by the leadership of MACBAN led by its Chairman, Alhaji Muhammadu Kiruwa; governors, Seyi Makinde (Oyo), Gboyega Oyetola (Osun), Akeredolu (Ondo), Muhammed Badaru (Jigawa), and Atiku Bagudu (Kebbi), and heads of security agencies in the states.
In the communiqué read by Fayemi, the stakeholders agreed that night and free-range grazing should be banned henceforth.
In banning underage herding, they described it as inimical to national security.

The stakeholders condemned herders’ occupation of state forest reserves and described it as illegal.
Fayemi said the meeting was conveyed to find lasting solutions to the incessant killings, kidnapping and crises between herdsmen and farmers in the South-west.

He said free-range grazing must be stopped to avoid conflicts between the farmers and the herders.
“MACBAN should embrace and be committed to modern breeding process by creating grazing reserves and practice ranching to prevent cattle roaming about,” the communiqué said.
The communique clarified that the Ondo State governor’s ultimatum was for illegal occupants of the forest reserves, saying the media misrepresented his directive.

“No one had sent anyone away from any state or region but all hands must be on deck to fight criminality,” it stated directing: “Criminals should be apprehended and punished, no matter their origin, class or status.”

Saying security agencies have been trying to stem the tide of criminality in the country but must step up their efforts in the fight, the communique recommended strengthening alternative security arrangements to complement the mainstream security agencies.
It also stressed the need to build a partnership for peace and security with MACBAN and jointly wage war against criminality.
“Insecurity is a national challenge and not peculiar to any tribe or region but must be addressed by the cooperation of all,” it added.

Noting that MACBAN also suffers insecurity and kidnapping and thus desire peaceful coexistence, the communiqué said the association is ready for any peaceful move by the states to engender security.
As a measure to strengthen the relationship among various stakeholders, the communiqué recommended the setting up of a standing committee comprising farmers, MACBAN and the government in each state (where they don’t exist) to ensure synergy and result.

It urged states to create economic opportunities for the people and reduce opportunities for criminalities.
Earlier in their opening remarks, the various stakeholders had highlighted happenings in their states for discussion.
Fayemi used the opportunity to clarify that herdsmen were not asked to vacate Ondo State as Akeredolu did not order the Fulani to leave the state.

Fayemi said: “Many members of MACBAN were born in the South-west. So, Akeredolu cannot ask Fulani to vacate Ondo State. The area concerned is the forest reserves and it is about registration and also to work in line with the law.
“What we are after are the criminals, not Fulani herdsmen. Criminals are criminals irrespective of their ethnic group.”

Meanwhile, a former Executive Secretary of the NHIS, Yusuf, and public affairs analysts, Nyiam, have called on Buhari to take responsibility for defending Nigerians, stressing that the increasing cases of kidnapping, banditry and criminality by herdsmen are signs of a failed government.

Both spoke yesterday on ARISE NEWS Channels, the broadcast arm of THISDAY Newspapers.
Yusuf, who blamed the federal government for the continued crisis of banditry, kidnapping and criminality among herdsmen called for the intervention of religious and traditional rulers, saying the government cannot fight insecurity alone.
He said Northerners, the Yoruba and the Igbo have a generational history of living together without crisis and that should not be reversed now.

He called on the religious leaders and traditional rulers to intervene in the crisis in the South-west to prevent it from escalating.
Yusuf, who identified himself as number one critic of the Buhari administration on insecurity, urged traditional rulers and religious clerics to emulate Rev. Yakubu Pam and Sheikh Ahmed Gumi who travelled to Ruga settlements to canvass peace and the need for peaceful coexistence.

He said: “The traditional rulers and religious clerics should speak out. There are several drums of war everywhere. It is easy to start a war but no one knows where the war would end.
“Government needs to involve community elders in events like this. This is because no one knows where such a crisis could lead. Nigerians have rights to live anywhere in a peaceful environment.

“All these drums of ethnic warfare are an essential threat to the continued unity of Nigeria and the federal government should not encourage it any longer. The community leaders must speak up. This is not the time for silence. This should be the time for dialogue.”

Yusuf also called on the federal government to set up forest rangers to monitor and compliment the efforts of the law enforcement agencies in checking herder-farmer conflict.
He warned that the present trend is dangerous to the continued unity of Nigeria, adding: “This is the time for Yoruba leaders to step in and ensure peace.”
Speaking on the topic, “Conflict and Likelihood of Violence,” Nyiam, who warned against the danger of granting unfettered access to suspected terrorist herdsmen in southern Nigeria accused Buhari of insincerity.

He explained: “For some time, I have always said that the president lacks the sincerity of purpose and political will. I say this because if you remember, when we had the same thing happening in Benue, one had to intervene and call the president, that the president cannot shy away from such an issue.
“We need to see him stop being nepotistic and taking sides.”
Nyiam added that it is obvious that the South-west has been strategic to the nation in terms of the economy, human resources and the tolerance of the average Yoruba.

“The issue we have watched in the last three weeks or a month is that the Fulani militia has been kidnapping Yoruba people, raping their women and those who were intermediary within, were their so-called Seriki Fulani. I mean, how much more can the Yoruba take?
“People alleged that Sunday Adeyemo, aka Sunday Igboho, gave an ultimatum, no! It is the people that gave the ultimatum. Sunday Igboho is only the voice of the people,” he added.

He said it was a mistake for the governor of Oyo State to have reprimanded Igboho.
“I do know that the Oyo Governor, Seyi Makinde, a very good governor, tries to be careful but you see, when things get to a point, as the chief security officer of a state, the governor should stop being neither here nor there.
“I think the example we have seen of Governor Akeredolu of Ondo State is what we expect from governors across the country generally because you cannot be a governor when the primary function of government is to provide security and yet you don’t,” he stated.

Nyiam, one of the surviving coup plotters against the regime of General Ibrahim Buhari (rtd), traced the source of weapons of the herdsmen to military officers who invested in cattle rearing.
Nyiam said he came to this conclusion after a clash between the herdsmen and his community in Ogoja in Cross River State.
He said the clash resulted in the death of a Fulani man who had been living in Ogoja for ages.

He explained that military officers went to the old Gongola region (Taraba and Adamawa States) to buy cows as an investment and gave arms to the herdsmen to protect themselves and their cows against harassment.
According to him, after the clash between his community and the herdsmen, the army officers living in Ogoja Cantonment were worried on how to recover the guns given to the herdsmen after the clash.

Nyiam, therefore, charged Buhari to rise up to the occasion as the patron of the Miyetti Allah Cattle Breeders Association of Nigeria (MACBAN) and a leading Fulani to protect Nigerians from criminal herdsmen.
He accused Buhari of protecting the interest of Fulani when he is also constitutionally bound to protect all Nigerians.
He commended the governors of Ondo and Oyo States for rising up to protect the people against the invading criminal herdsmen. 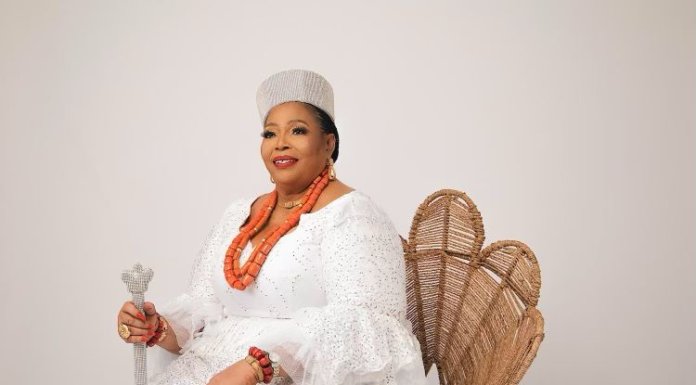