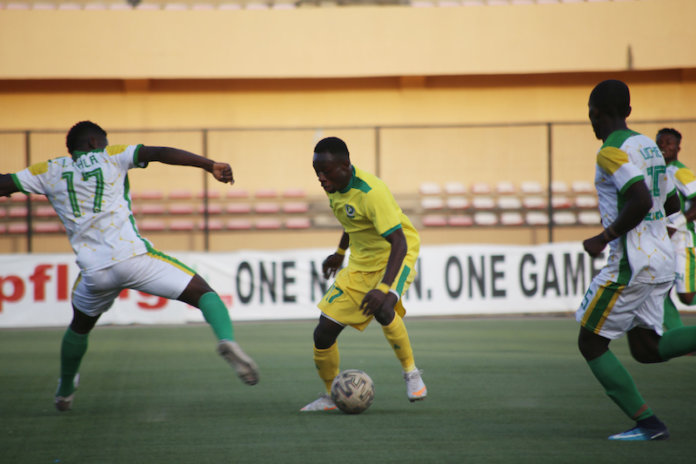 Nasarawa United and Sunshine Stars highlighted Match-day 6 of the Nigerian Professional Football League (NPFL) yesterday with away victories in Ozoro and Uyo respectively.

The 2-1 win for Nasarawa against Warri Wolves at the Ozoro Township Stadium moved the Solid Miners to the summit of the Nigerian topflight on 14 points. They are two points ahead of former leaders Rivers United, who however have a game in hand.

Uche Ihuarulam headed Wolves in front from a Jumbo Wisdom pinpoint cross in the 21st minute.

The visitors netted the winner through Chinedu Ohanachom 12 minutes from time.

Both Rangers and Lobi who canceled themselves out in a barren draw at the Cathedral in Enugu remain in the top four on 11 points each.

Kwara United who added to the woes of FC IfeanyiUbah moved from 10th to 5th spot on the log.

Sunshine Stars’s 2-1 victory against hosts Dakkada in Uyo also lifted the Akure Gunners sixth as against 11th prior to this Matchday, while Heartland and Abia Warriors wriggle out of the relegation zone.

In Okigwe, Heartland recorded their second win of the season edging out Akwa United 2-1 at the Okigwe Township Stadium.

Mfon Udoh poked the ball beyond Ikechukwu Ezenwa in the 34th minute following a pass from Seth Mayi.

Heartland fought back through goals from Samuel Nnoshiri and Nduka Pasacal Eze.