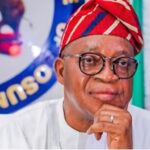 Storms are terrifying disturbances that are able to tear away even the most deep-rooted trees. The trees that survive are those that bend to the winds and somehow lessen the grip of destruction. With people and politics, the same principle holds true: bend to the pressure or break. It would seem that Tunji Olowolafe, the MD/CEO of Deux Project Limited, knows this well enough to adapt it to his own situation.

Tunji Olowolafe is one of those higher-up Nigerian figures, whose charisma and connections enable them to artfully command both political and economic power. With Olowolafe, the prestige was not handed to him; his efforts delivered the goods to him. But very little is certain or solid on such heights, and so the latter end of 2020 witnessed Olowolafe’s slip.

It reportedly began with the 2020 October 10 Lekki tollgate shooting. Because Olowolafe allegedly has a finger in the pie that is the Lekki Concession Company (LCC), and was one of the characters behind the allegations that Asiwaju Bola Ahmed Tinubu was partly to blame for the shooting. The alleged motivation for Olowolafe’s gambit was to have his LCC take over management of the Ikoyi-Lekki toll bridge, which is reportedly a pot of gold under the control of Tinubu.

But Tunji Olowolafe is supposedly one of the many guys Tinubu has helped and launched into choice positions in Lagos. So, what gives? Are the turnovers of the toll gate enough incentives to turn against a benefactor?

At the end of the day, Tunji Olowolafe is alleged to be one of those who bore the heat of public distrust and condemnation. Thus, since 2021 began, the man has kept away from the limelight and is reported to have taken to flying under the radar. After all, no influential Nigerian ever plunged beyond recovery from keeping a low profile. Better to bend than break.