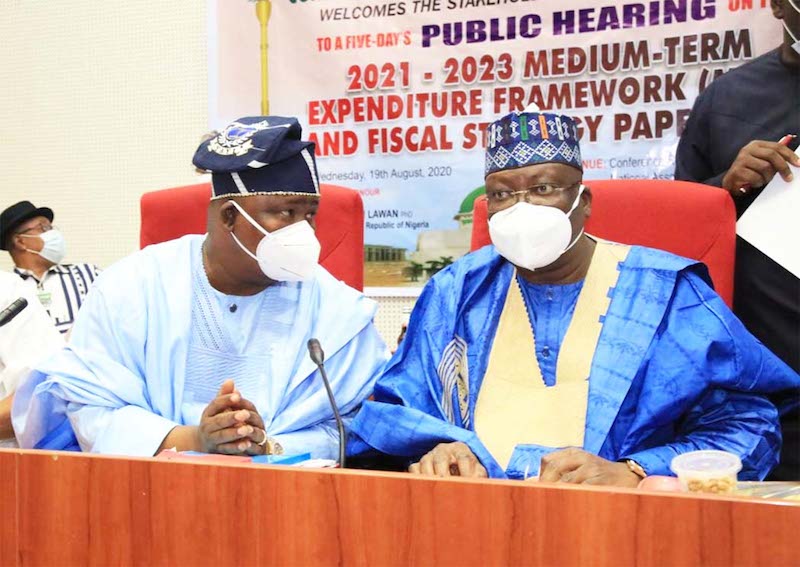 The federal legislators are set to pull Nigeria out of the miasma of budgetary impudence and public finance mismanagement through amendments to the Fiscal Responsibility Act (Amendment) Bill 2019, which has passed second reading, writes Udora Orizu

In a bid to create a veritable tool for the fiscal reset, macro-economic stability and attainment of a prudent and prosperous economy hinged on best practices of transparency and accountability, federal lawmakers are mulling the passage of the Fiscal Responsibility Act (Repeal and Reenactment) Bill, 2019, currently before the National Assembly.

However, according to the Commission certain inherent loopholes, weaknesses and errors have hampered effective implementation of the Act hence the need for substantial amendment of the FRA, 2007.

It is the Commission’s firm belief that the proposed amendments to the FRA, 2007 would greatly improve the potency and functionality of the Fiscal Responsibility Act as well as the structure and performance of the Commission.

The proposed legislation, entitled, ‘’A Bill for an Act to provide for prudent management of the Nation’s Resources, ensure long Term Macro-Economic stability of the National Economy, secure greater accountability and transparency in Fiscal operations within the Medium Term Fiscal Policy Framework and the establishment of the Fiscal Responsibility Commission to ensure the promotion and enforcement of the Nation’s Economic objectives; and for related matters,’’ has been passed for second reading at the Senate.

According to the proposed Bill, the rationale for it is premised primarily on the need to give teeth to the Fiscal Responsibility Commission (FRC) to empower and enable it enforce the spirit and letters of the Act.

As indicated in the title, the Act contains provisions that present some kind of silver bullets that, if faithfully implemented, could block wastages, check corruption and instill prudence, transparency and accountability in the management of public finance in Nigeria.

The urgency of these amendments is underscored by the current state of affairs of the country’s economy, which is in a second recession in four years.

The amendment Bill also seeks to enhance the powers of the Commission beyond what was describes as ‘its current toothless bulldog’ status to one that enables it to bark and bite.

The Senate Committee on Finance has expressed commitment to the passage of the Bill. Chairman of the Committee, Senator Olamilekan Adeola, gave the commitment, when the management team of the Fiscal Responsibility Commission (FRC) paid an advocacy visit to the Committee.

Adeola said the Committee was working assiduously towards the passage of the bill since it was referred after passing second reading in Senate plenary. He noted that the leadership of the Senate is keen on the bill due to its potential to empower the FRC to efficiently implement the provisions of the Fiscal Responsibility Act.

According to him, the National Assembly believes that an efficient FRC would be helpful in advancing the oversight function of the legislature, adding that Senators and members of the House of Representatives would have no difficulties throwing their weight behind the bill.

The Bill, when amended and finally passed, will enhance the functions of the Commission in the following specific ways: ‘’Disseminate such standard practices including international good practice that will result in greater efficiency in the allocation and management of public expenditure, revenue collection, debt control and transparency in fiscal matters.

“Undertake fiscal and financial studies, analysis and diagnosis and disseminate the result to the general public. Enforce the submission of periodic returns on revenue performance showing estimates, actual collection and remittances to the Consolidated Revenue Fund of the Federal Government by corporations and agencies accompanied by accurate documentary evidence of collections and remittances.

“Ensuring that all profits or dividend payments due to the federal government from any privatized entity in which the federal government is a shareholder are duly remitted into the Consolidated Revenue Fund. Attend and monitor monthly monitoring meeting of all revenue collectors in collaboration with the office of the Accountant General of the Federation.

“Monitor the operation of the Excess Crude Account and the various Funds created under the Nigerian Sovereign Investment Authority (Establishment, Etc.) Act, 2011.’’

The amendment bill provides that the Commission shall be independent in the performance of its functions. The provisions of Public Officers Protection Act shall apply to its members and staff in the discharge of their functions.

To ensure improved coordination and performance of the MTEF, the bill provides that the Minister of Finance shall be responsible for matters related thereto, including the preparation and submission of the document to stipulated authorities.

The amendment bill provides timelines for the preparation and presentation of the Annual Budget to the National Assembly, accordingly. The Federal Ministry of Finance, Budget and National Planning shall, not later than the end of September each financial year, present the budget for the next financial year for the consideration and approval of the Federal Executive Council.

The Federal Executive Council shall, not later than the last day of October of each financial year, approve the budget. The National Assembly shall give priority attention to the consideration of the budget upon presentation of same to it by the President.

The amendment bill makes the following provisions relating to fiscal discipline for Government Owned Corporations and Agencies: ‘’Submission of additional documents including estimated revenue breakdown into monthly collection along with their annual budget & revenue and expenditure schedules to the Minister of Finance. Breakdown of projected Operating Surplus into quarterly estimates to ensure fiscal accountability. Commit the Corporations and Agencies to taking measures to combat corruption and diversion of government revenue. Limit the expenditure of MDAs to not more than 75% of their gross revenue.

Corporations and agencies under the remit of the FRA shall remit 80% of their Operating Surplus to the Consolidated Revenue Fund of the Federal Government. The calculation of this surplus shall be in accordance with the template issued by the Commission.

The Agency or Corporation so directed by the Minister would take any valid circular requiring certain payments into the Consolidated Revenue Fund (CRF) and evidence of compliance to the directive into cognizance in computing the actual Operating Surplus payable.

The amendment bill also provides that the amount of Operating Surplus payable by each Corporation will be calibrated to depend on the nature & extent of the particular Corporation’s funding from the Treasury accordingly.

The following offences and accompanying sanctions have been provided for in the amendment bill. ‘’Willful (directly or indirectly) hindrance or obstruction of the Commission or its agent from performance of functions attracts a term of not less than three (3) months imprisonment or a fine not less than N500,000.00 or both fine upon conviction.

Provision of false information (including in documents) response to a request or in the performance of a function imposed by the Act attracts a term of not less than six (6) months imprisonment or fine not less than N1,000,000.00 or both fine upon conviction.

Misleading and partial (instead of full) disclosure of information regarding functions imposed by the Act attracts a term of not less than three (3) months imprisonment or fine not less than N500,000.00 or both upon conviction.

‘Refusal or failure to give information in the performance of a function imposed by the Act attracts a term of not less than one year imprisonment or a fine of not less than N1,000,000.00 or both upon conviction.’’

Forfeiture of Proceeds of Corruption

The amendment bill provides that a Federal High Court, whether under a criminal or civil action, is empowered to recover all benefits of related corrupt enrichment; and upon conviction, the offender will also forfeit all ill-acquired funds to the Consolidated Revenue Fund (CRF).

The amendment bill grants the Commission power to acquire and own properties for the purpose of the performance of its functions, filling a void in the extant Act.

The FRA bill alongside other bills like Petroleum Industry bill (PIB) and Electoral Act (Amendment) bill are to be given speedy consideration by the National Assembly as it reconvenes from its Christmas holiday on Tuesday, January 26.