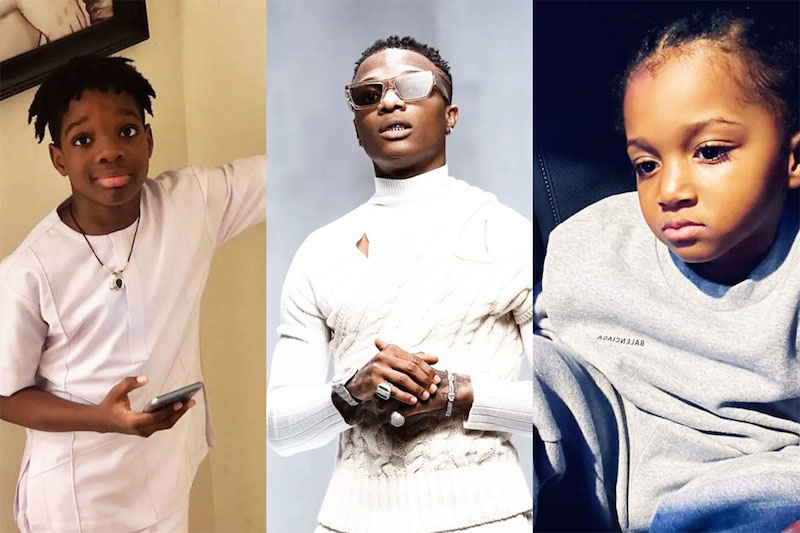 Two of Wizkid’s children recently got the chance to spend time together for the first and it was quite an exciting moment for the superstar. The singer had his firstborn son, Boluwatife, flown from Nigeria to Ghana where he has been vacationing after leaving his residence in the UK. The famous Nigerian music superstar took to his Instagram story to post short clips of his first son, Boluwatife, and his third son, Zion playing around each other. The pop star simply captioned the video “kings” with several love emojis showing how he feels.

Interestingly, it was an opportunity for two of the singer’s three sons to finally meet each other for the first time. They do not live together because they have different mothers so. They stay with their mothers. Boluwatife stays with his mother, Shola Ogudu, in Nigeria, while Zion stays with Wizkid and his mother, Jada, in London, England.

The second son, Ayo, stays with his mother, Binta, in the United States of America. Zion recently snagged an ambassadorial deal with a UK clothing line known as Childsplay.

The Ginger crooner returned to Nigeria shortly after the release of his latest album ‘Made in Lagos’ in December after being away in London for months. Soon after, he moved to Ghana where he’s been staying.

Much-loved Wizkid, real name Ayodeji Balogun has had a hard time keeping it in his pants and remaining with one woman.

This has resulted in him fathering three children with three different women. While every relationship with each of his baby mamas comes with a handful of drama, it warms the heart to know that the singer makes efforts to be involved in the life of his children, even though he is not married to their mothers.

The singer had his first son Boluwatife Balogun with Oluwanisola Ogudu back in 2011. In 2016, Wizkid welcomed his second son Ayodeji with baby mama number 2, Binta Diallo, the beautiful Guinean-American model. Again in 2017, the music star welcomed his third son Zion Balogun with his manager Jada Pollock. Jada Pollock is a brand consultant from Britain.

She used to work with Chris Brown and Pia Mia before she started the same consultancy work with Starboy.