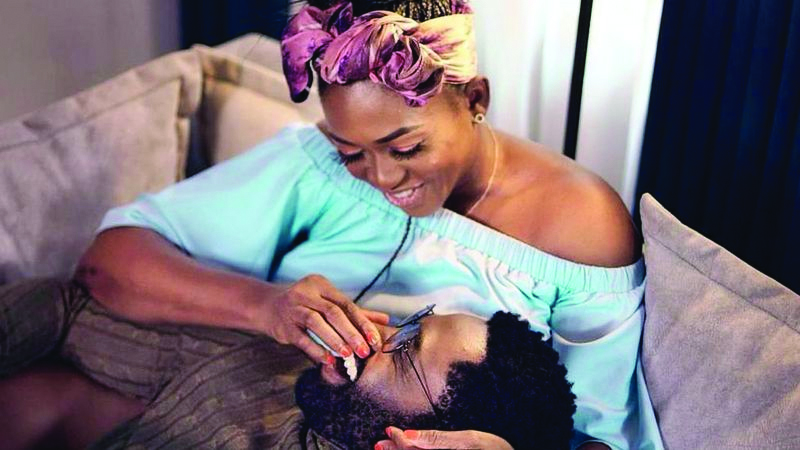 Aituaje Iruobe, known professionally as Waje, whose vocal range covers three octaves, is looking good for the alter, or so it seems. The immensely talented singer, who first gained recognition after being featured on the remake of P-Square’s “Omoge Mi”, and the duo’s 2008 hit track “Do Me”, left her fans pondering early this week, after she shared an bosom photo of herself and a male singer, Ric Hassani on social media. Has Waje found her man? Is she set for marriage? Or could it be a publicity stunt? Ferdinand Ekechukwu digs in

It’s a given that entertainment celebrities thrive on publicity to gain traction on mainstream or social media. And most likely it is a publicity stunt the social media post by Waje that has got her friends, fans and followers talking. Like the saying “no publicity is bad publicity”, the multi-talented singer and song writer’s post isn’t in any way bad. It’s sure a winning stunt having set social media abuzz and has incredibly fetched the needed attention. The talent show judge, Waje shocked her fans as she shared a photo of herself and a male singer, Ric Hassani on social media.

The 40-year-old singer took to her Instagram page last Tuesday to post the photo wherein she is seen spending time with the 32-year-old musician. She didn’t reveal if her supposedly new-found relationship with Hassani was for a forthcoming music project or something that would lead to the altar. The two were intimately captured with Hassani’s head resting on Waje’s bosom and the R&B singer playfully touching his nose. As if that was not enough, Waje’s caption sparked even more curiosity among members of the internet community.

The ‘I Wish’ crooner simply wrote: “It’s time…” Shortly after sharing the heart-melting image, mutual celebrity friends of the two were spotted in the comment section with congratulatory messages. The messages suggest that the two might actually be getting married or have only made their relationship status public. There were also a good number of spectators who strongly believe it’s teaser for music collaboration, possibly scene from a video, that is. The multi-award-singer only recently released a new single titled “Best Thing” last December.

Some fans also took to Twitter to air mixed opinions on what the photo could have meant. “On top of this Waje and Ric Hassani matter, I can’t wait to listen to their new song,” a Twitter user wrote. Another user commented: “I don’t think Waje and Ric Hassani are dating, that “It’s time” caption with their picture together can be a song title and for publicity, which is working perfectly.”

When contacted, Waje’s management team was quoted saying, “big announcement coming soon.” However, the vocal powerhouse would prefer to not talk about the image for now, but added “I’m very happy.” However, a visit to Ric’s page shows that he has not posted the picture.
Ric Hassani (born Ikechukwu Eric Ahiauzu) is a singer, songwriter and musician. Hassani was born on 6 January 1989, in Port Harcourt. Hassani graduated from Covenant University. He attended the University of Surrey, where he earned a master degree in energy economics.

Hassani released his debut album The African Gentleman in 2016. He is said to have a dress style that is influenced by his self-acclaimed stance as a gentleman. Some months ago Waje opened up on to her Twitter fans about her life, in a Q&A session. Amongst the numerous questions answered, the talented singer stated that she can marry a man 10 times younger than herself. The songstress also spoke about her friendship with Omawumi and opened up on her most embarrassing moment.

Waje in 2019 revealed her intentions to quit music professionally. She said she was considering quitting because of the lack of support. “The bottom line was that I was disconnected from my fans. They didn’t know what I was doing,” she had explained. “In the industry, there are procedure chains. There’s the video making; the PR; the marketing. From the production of the song to the point where it gets to the listeners, there are different people in positions to make things happen. But sometimes, in the struggle to stay relevant and keep your name afloat, you just release without proper planning.

“There’s pressure in the industry and all these were the things I was going through at the time. I thought, perhaps, I should leave the industry while the applause is still loud. It was a scary time and I didn’t want to be known as a failed artiste. Fans simply didn’t know what I was doing and that is what we’re trying to repair.”
Waje would however shock her fans in May 2020 when she released “Red Velvet,” a single 10 album. Born Aituaje Ebele Iruobe, the singer was beamed to her Nigerian fans when the former twins group P-Square featured her on their track ‘Do Me’.

The song was such a hit but the enigma that came with the video made it a mega hit. Nobody knew what the Edo-State born artiste looked like since she wasn’t featured in the music video. Although she had earlier featured on a remake of the singer’s ‘Omoge Mi’. Social media was at its teething stage then, heightening the mystery around her. By the time her identity was revealed, Waje had won the hearts of many with her vocals. Although she didn’t fit the mental picture of a tall slender sexy lady, Waje still had a great following. There were few female artistes making waves at the time, like Sasha, Weird MC who were famous in the rap genre. Her closest pal was singer Omawumi.

Despite recording a few singles and collaborating with artistes like M.I. (‘One Naira’), Waje suddenly strolled into oblivion. Speculations were rife on her sudden muteness and quite a few wondered if she was not another one-hit wonder. However, the singer stunned her fans when she emerged from her wilderness with the release of her self-titled album ‘Waje’. But what got people talking was when she rocked a sexier and curvier body in her 2014 hit track ‘Coco Baby’ which featured Tanzanian artiste Diamond Platnumz.

Speaking on her journey a couples of years back, Waje says “sometimes I feel like my career started in 2013 when I released my first album.” By 2019, her career has spanned over a decade. She attributed her staying power to her music which she said it’s a daily discovery for her. Imbued with a friendly mien, underneath that joviality lies a disciplined and protective mother. A single mother, Waje for a long while hid the identity of her child from the public. But when her daughter went ahead of her to open a Facebook account, the singer was left with no choice than to introduce her to the world.