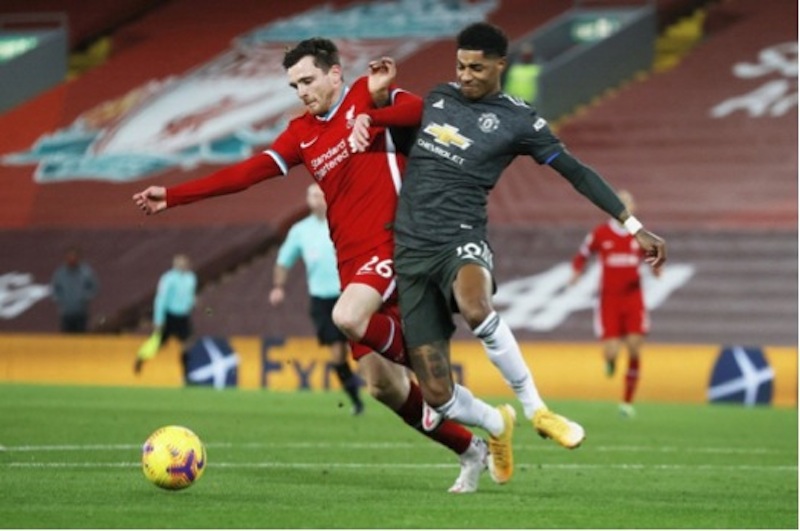 After a drab game in what was expected to be the headline encounter of last weekend’s Premier League, the two most successful English teams-Manchester United and Liverpool will again be battling for a fifth round place in the FA Cup tomorrow at Old Trafford. While the Red Devils would be boosted by their 2-1 win over Fulham midweek that catapulted them to the summit of the league log, the Reds will however need extra motivation against their arch rivals after their 68-game unbeaten Premier League home run was ended by relegation threatened Burnley on Thursday

Manchester United and Liverpool clash for the second time in the space of a week on Sunday, this time the face off is at Old Trafford in the fourth round of the FA Cup.

The two sides clashed at Anfield last Sunday, with Liverpool dominating a drab goalless draw.
However, both teams have played a Premier League game each since then with first place Manchester United now sitting six points ahead of fourth-place Liverpool in the table.
Ole Gunnar Solskjaer’s men extended their unbeaten league run to 13 games on Wednesday, producing a hard-fought 2-1 win over Fulham.

The Red Devils have clinched 10 wins and three draws since losing to Arsenal in early November, and they now have a two-point lead at the summit.
With 36 goals in 19 league games, United are the second-highest scorers in the top-flight. However, an iffy defensive record means they have the joint-fifth best goal difference.

On the flip side, Liverpool’s 68 unbeaten run at Anfield was brought to an end by Burnley on Thursday.
The Reds hadn’t lost a league match at home since April 2017, but the Clarets secured a 1-0 victory, thanks to a penalty from Ashley Barnes.

Things were looking up when Jurgen Klopp’s men thrashed Crystal Palace 7-0 just before Christmas, but it’s been all downhill since then.
Three draws and two defeats have seen Liverpool drop down the table, with Klopp’s side failing to score in each of their previous four Premier League outings.

Liverpool beat a supremely young Aston Villa side 4-1 in the third round of the FA Cup, but one cannot read too much into that result.
The two sides last clashed in the FA Cup back in 2012, with Liverpool claiming a 2-1 victory on that occasion.
Given that Liverpool are struggling to score goals at the moment, United will be confident of getting one over their rivals this weekend.

Meanwhile, prior to the United Liverpool clash on Sunday, another standout tie in the fourth round of the FA Cup will take place at St Mary’s this afternoon as Southampton welcome fellow Premier League club Arsenal..
Southampton beat Shrewsbury Town 2-0 on Tuesday night to book their spot in round four, while Arsenal advanced courtesy of a 2-0 victory over Newcastle United earlier this month.

Southampton were originally due to take on Shrewsbury in the third round on January 9, but the match had to be rearranged after a coronavirus outbreak at the League One club; the fixture finally took place on Tuesday night, and it was a straightforward 2-0 success for Ralph Hasenhuttl’s side.
The Saints have only won the FA Cup on one previous occasion, lifting the trophy in 1976 courtesy of a famous victory over Manchester United.

Southampton reached the final back in 2003, though, losing to Arsenal.
Hasenhuttl’s team will enter this game off the back of successive home victories, including a 1-0 win over Liverpool in the Premier League at the start of the month, and an excellent 2020-21 campaign to date has left the club in ninth spot in the table ahead of their next league game on January 26, which is also against Arsenal.

The Gunners were far from their best in the third round against Newcastle and needed extra time to secure a 2-0 victory.
Mikel Arteta’s side have taken four points from their two league matches since then, including a dominant 3-0 win over Newcastle on Monday evening to move into 10th spot in the table, two points behind Southampton.

Arsenal have won this competition on 14 occasions and are the holders, beating Chelsea 2-1 at Wembley courtesy of a brace from Aubameyang, and it might again represent the team’s best chance of silverware this term despite their involvement in the Europa League.

It is almost two years since the capital giants last lost an FA Cup fixture, while they are unbeaten in their last four matches with Southampton since a 3-2 defeat at St Mary’s in December 2018.
The two teams played out a 1-1 draw in the Premier League just over a month ago, though, and it is difficult to know what to expect in this match as both managers could spring surprises with their team selections.