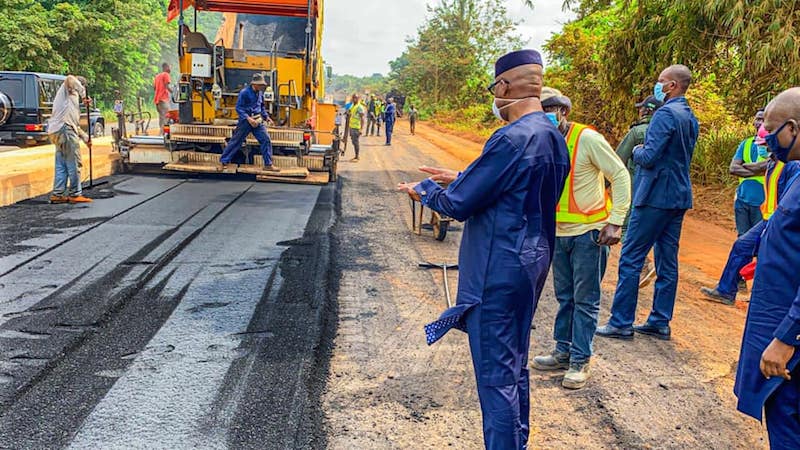 The importance of quality roads to the development of the Nigerian society is constantly in the national discourse, and so needs no repetition here. In Ogun, as in every other state, there is apparently a veritable need for good roads to link communities and create an enabling environment for investment to thrive. Since coming on board as the fifth democratically elected governor of Ogun State on his 59th birthday on May 29, 2019, Prince Dapo Abiodun has left no one in doubt about his desire to make Ogun State an investment destination and development hub ready to live up to its billing as Nigeria’s Gateway State.

Underrated by many based on the false notion that a billionaire business mogul attuned to years of boardroom presentations would not make it in the murky waters of politics, a notion easily disproved but nevertheless tenaciously held on to by naysayers, Abiodun has unveiled an ambitious acronym ISEYA philosophy; “Building our future together”, solidly anchored on business models and the notion of governance as problem-solving, setting up new institutions and intervening to make extant institutions more relevant and able to deliver on their social mandates.

Bad roads, Nigerians have come to learn time and again, are a major bane of the economy. Vehicles get spoilt on the roads almost as a daily ritual even as the movement of goods from one place to the other is perpetually imperiled: as if by compulsion, perishable produce rot on farmlands. Happily, though, long abandoned roads are receiving attention in Prince Abiodun’s Ogun where campaign promises have become articles of faith. As has been previously remarked, anyone visiting Ogun in recent times will readily attest to the fact that it is gradually becoming a huge construction site. In this regard, it is crucial to remark on the ongoing rebuilding of the Abeokuta-Sagamu interchange road for a moment.

Constructed by the Gbenga Daniel administration and Obasanjo inaugurated by the then President Olusegun Obasanjo, the road had suffered from the normal wear and tear over the years. Last year, as part of the efforts by the Abiodun government to rehabilitate existing roads in the three senatorial districts of the state, attention quickly shifted to the Sagamu interchange- Abeokuta road, which had become notorious on account of its state of disrepair and the nightmare of travellers.

The road, 42 kilometres long and 14.6 meters wide, is strategically important as the major route linking Abeokuta, the Ogun State capital, to Nigeria’s commercial hub, Lagos, as well as the Eastern parts of the country. It originates from the Government House, Abeokuta, and traverses the densely populated business districts and residential areas of Ibara, Kuto, MKO Abiola Stadium, Oke-Mosan, Laderin, Kobape and Siun, terminating at the interchange. The two-lane dual carriageway separated by a two-meter median boasts of state-of-the-art architecture, including standard drainages and functional streetlights. There is of course the reconstruction of existing earth drains with adequate turn outs where necessary. And, again, there is a divider on the road with ornamental trees planted to create aesthetic appeal.

When the construction began, as noted by the state Commissioner for Works and Infrastructure, Ade Akisanya, three milling machines were sited on it to remove the entire asphaltic portions and replace them with new asphalt overlay of both binder and wearing course, to ease traffic congestion in the area, as well as improve the socio-economic development of the people along that corridor. The rehabilitation of the road became necessary in order to alleviate the hardship of riders and motorists plying the route and, in any case, the people along the corridor stood to benefit a great deal, as the rehabilitation would improve their socio-economic status.

Apart from commercial motorists plying the corridor who lauded the Abiodun administration for embarking on the construction of the road and eliminating the hardships previously faced by motorists and other road users, the communities along the corridor have been witnessing exponential growth and development. That is the main point that this essay wishes to draw attention to. Remarkably, even though the project has hardly extended beyond 70 per cent completion, users are already singing happy tunes. In the past, if you were going to Abeokuta from Sagamu you would spend about an hour and 25 minutes: but now, because the road is smooth and boasts modern road architecture, the journey takes only about 30 minutes.

Invaluable man hours are no longer wasted in nerve-wracking hold-ups. Accidents have reduced to the barest minimum, and the potholes that caused motorists so much despair have disappeared. Industrial estates are springing up along the corridor: all of a sudden, the place has become an industrial hub. Distilleries are doing well there. Many people are now coming there to establish businesses, which is facilitating development. The lesson is clear: you must have a good road network for businesses to thrive.

Apart from this, roads are of course being built across all the local government areas in the state. Last September, while inspecting the laying of asphalt on the ongoing reconstruction of Adigbe road in Abeokuta South local government area, Governor Abiodun promised to continue embarking on projects that would attract more development into the state.
As he noted, his administration had commenced full rebranding of the entire state, and road construction was ongoing in various parts of the state, including Sagamu-Abeokuta road, Adigbe road, the reconstruction of which has been extended to Obaada in Ewekoro local government area to enhance the economic value of the axis; Oba Erinwole road in Sagamu, Obantoko road, and Ijebu-ode/Epe road.

The Adigbe road was initially awarded by the Ibikunle Amosun administration but was abandoned by the contractor due to non-availability of funds. Besides, Governor Abiodun also approved the reconstruction of 12 roads across 11 local government areas of the state. The roads included the Ijebu Ode-Epe/Sagamu-Ore Interchange Flyover in Ijebu-Ode/Odogbolu, the 1.2km Ilishan Market Road in Ikenne, the 2.0km Itori Junction-Total road in Ewekoro, the1.3km Joju Road in Ado-Odo Ota LGA, the 3.41km Olomore Junction-Sanni Road in Abeokuta North, the 5.9km Sagamu Junction-Iperu Roundabout road in Sagamu/Ikenne, the 3.0km Iperu Roundabout-Ode Road in Ikenne, and, of course, the 7.0km Ago Iwoye-Oru-Ijebu Igbo road in Ijebu North. Others were the 5.7km Somorin-Kemta, Idi-Aba Road in Odeda, 3.8km Ilashe-Koko-Alari road in Ipokia, the 8.0km Orile Oko road in Remo North, and the 2.3km Obafemi Awolowo Way-Mada-Takete in Remo North.
Without noisemaking and without any frills, Governor Abiodun is proving critics wrong. He is no doubt a silent achiever who loves the state passionately and wants to make a mark. And make a mark he certainly will.
––Adeosun sent this piece through boluadeosun@outlook.com