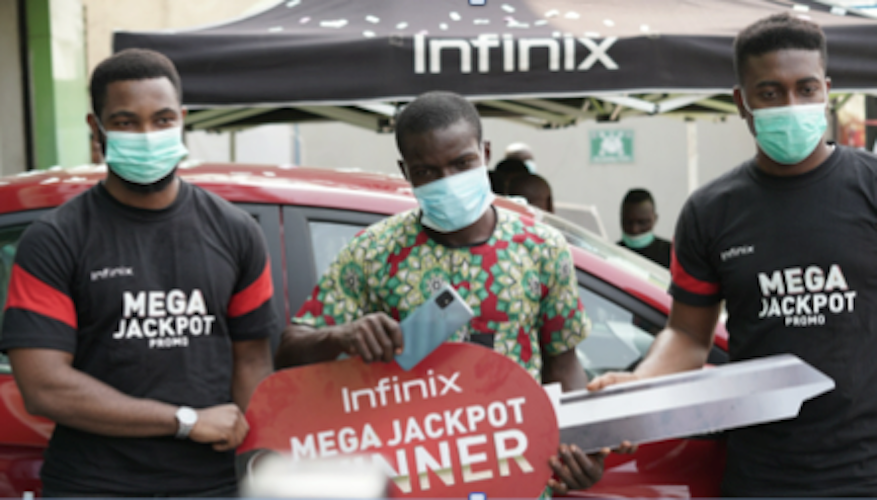 Premium smartphone maker, Infinix, has just rewarded one of its loyal fans with a brand new car, as they bring to an end to three-month long mega jackpot promo.

A statement by the Marketing Communications Manager, Infinix, Kevin Olumese, said the promo which kicked-off on 17, November 2020 has seen many customers walk away with surprising wins, adding that today Olanrewaju Taofiq appears to be the luckiest.

The statement noted: “Olanrewaju Taofiq is a welder who lives in Ilorin, Kwara State, Nigeria. Unknown to him that the promo was underway, he walked into an Infinix-authorized store sometime in December and got himself an Infinix HOT 10 to replace his Infinix HOT 8 which he lost sometime during the week. According to him, he has been a long-time fan of the brand and all he wanted was just to get another Infinix device after losing his last one.

“He was barely interested in the Jackpot and almost refused to collect his raffle ticket. Thanks to his older brother who was able to convince him to give it a try, he reluctantly collected the raffle ticket and qualified for the raffle. Today, not only has Taofiq been able to enjoy the numerous features that the Infinix HOT 10 offers its many users; the young man is now the proud owner of a 2019 model JAC as well.”

The statement further explained that the Infinix mega jackpot promo was a means for Infinix to give back to customers and reward them for their unwavering support through the years.

Olumese hinted that in a time when the world is being faced with economic challenges, big wins such as this can help to wipe off the glooms in the hearts of many households and give them a glimmer of hope, “Infinix has been able to make that happen for all the families who were beneficiaries of this promo”.

The statement remarked that in November, Infinix offered to reward customers with gift prizes, including home appliances such as twin-tub washing machines, double-door refrigerators, microwaves, and TV sets as well as the grand prize of a brand new car.

The statement espoused that the promo was scheduled to run from the 17, November to January 15.

The statement maintained that consumers who bought any of Infinix’s Note 8 series, Zero 8 series, Hot 10 series or the Infinix S5 pro at any Infinix- authorized retail store during the promo period were given a raffle ticket that instantly qualified them for the Mega Jackpot, “many winners down the line, we have finally come to the end of the promo.”

Continuing, Olumese said: “Infinix is highly committed to positively affecting the lives of consumers. We consolidate our service to consumers by matching initiatives like this to our provision of highly innovative products. We believe that with the combination of technology and an extra helping hand, we can truly touch people’s lives and empower consumers to truly do more.”

In his remarks, Olanrewaju Taofiq expressed gratitude to Infinix for making him a proud owner of a brand new car.

“I never expected to be a car owner this year. Certainly, I have been able to make some money and cater to my basic needs from the proceeds of my work, but, owning a car so soon was not in the picture for me. I am particularly touched by this because I was ignorantly at the brink of losing this opportunity but for my brother who encouraged me to give it a try,” he stated.

He added that it would be commendable for more companies to put together initiatives such this because the simplest act of kindness can go a long way in affecting the lives of many people just like this one has affected his life and that of his friends and loved ones.