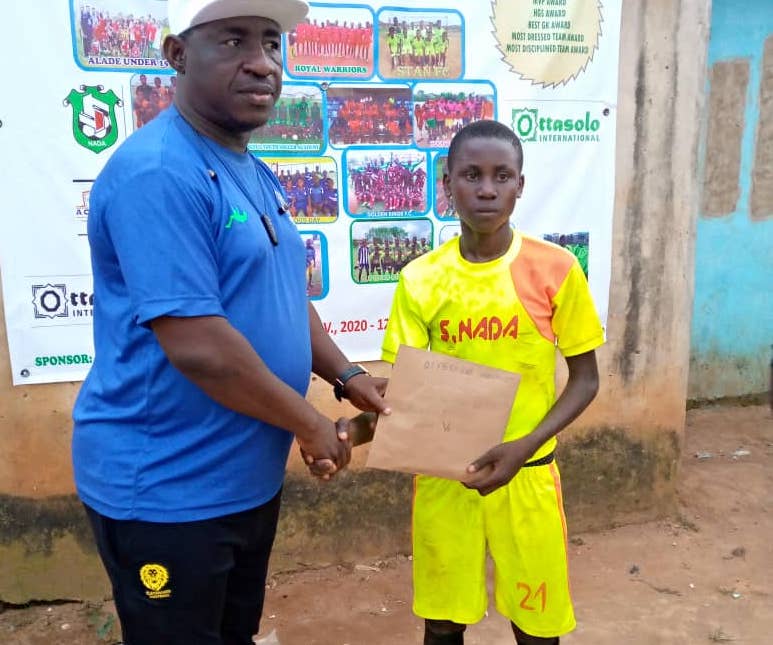 The Chairman of Ottasolo FC, Gabriel Davies, who has created a platform for supporting retired Nigerian footballers in need, explained at the weekend that it was his way of giving something back to the society.

Davies who is a former player of Stationery Stores FC of Lagos and Mogas ‘90 in Benin Republic insisted that his passion for the round leather game informed his empowerment programme for the retired footballers.

Speaking in Lagos at the weekend, Davies said that despite quitting football so early due to injuries, his passion for the game led to his setting up of Ottasolo Football Club of Lagos.

“Football gives me joy and I am comfortable with it anywhere. I am a former player and when I look back at my fellow colleagues, I feel bad that many are struggling to make ends meet.

“Because I also passed through this tough rough road to get where I am now, I decided to extend hand of fellowship to others from the little God has given to me from other businesses I am doing.”

Although he did not want to be dragged into the reasons why the football environment in the country fails to take care of former footballers, Davies insisted that footballers must learn to think of retirement when they can no longer be strong to remain in the game.

“So what I do now is to empower some ex-players and also guide some current players to grow well in their career. You cannot be a footballers for life. You either retire or injury retires you from the game.

“Football as a sport has a final bus stop and when a player gets to his bus stop, he has to look elsewhere for survival.

“This is where the Ottasolo FC Empowerment All Stars is supportive of former players to give them fresh hope,” he reiterated.

“These loans are without collateral and are given on regular basis.

On Ottasolo FC that gained prominence playing in the Preseason Rivers Cup, Davies expressed joy that within a short time, the team is gradually making impact in the Nigerian football scene.

The team, based in Owode, Ogun State, has been registered as an amateur football team in the Nigerian National League as a Lagos team.

“We played in the Preseason Football Tournament just late last year in Port Harcourt and it was a nice experience.

We have seven of our players already in the Nigeria Professional Football League. They were exposed through that pre-season tournament in Port Harcourt while one is going abroad for pro career.

“The success story within this short time is the driving force for us to want to change the narrative of club football in the country. For me, Football is good business if managed as pure business,” Davies concluded.