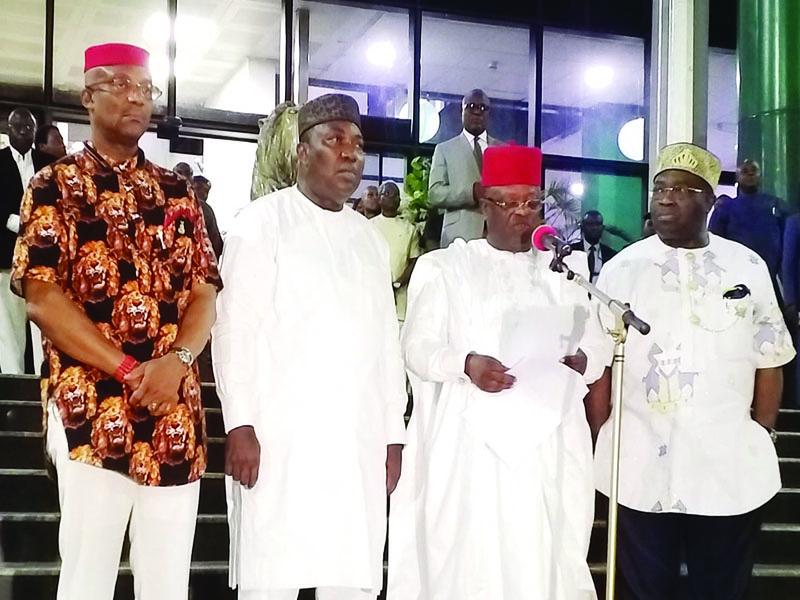 After resolving the constitutional and conceptual fog surrounding the establishment of a regional security outfit, the Southeast governors have set forth. But, do related jitters and concerns here have merit? Louis Achi asks
IN THE ARENA

When plucky governors of the Southwest geopolitical zone established Amotekun, a quasi-regional security outfit last year, after shrill opposition from the Northern-dominated federal government, some analysts forgivably might have assumed the coast was clear for others to follow suit. Recall that even the Attorney General of the Federation, Malami declared Amotekun an illegal child a few days after the Yoruba had held the naming ceremony.

Now, the Southeast region, unsettled by same increasing security nightmare recently formed a joint security outfit to tackle the zone’s rising security challenges. But the nation’s history garbs both regions in different perceptual robes, a scenario which sits pretty nicely with drivers of the fluid political dynamics of a nation in the throes of uncertain change.

In the face of significant national security failure, mere opposition to the establishment of regional security structures, though unconstitutionalised yet, accentuates the absurdity of operating a centralised police force in a presumptive federation.

Last week, Governor David Umahi of Ebonyi State and chairman of South-East Governors Forum, proclaimed that governors and leaders of the zone have finally formed a joint security outfit to tackle security challenges. He spoke from his Umunaga Uburu country home in Ohaozara Local Government Area, after a related Security Council meeting, saying the name of the outfit would soon be announced.

His words: “We have commenced the circulation of uniforms and vehicles to be used by the newly formed security outfit. Training and re-training of its personnel have commenced and we assure the people that all efforts are being put in place to secure life and property.”

Apparently, as the regional and even national insecurity spiraled, the South-Easterners, trailing the Southwest, urged their governors to save them from shadowy, violent intruders, who had made life miserable for them in their ancestral homes.
Criminal elements attack their targets with unbelievable ease with little response from the police and other security agencies. The raiding of villages and communities by bandits and other armed gangs worsened and led to loss of many lives, farm produce and other assets.

Perhaps, shaken out of their inaction, the regional governors under the chairmanship of the Ebonyi State governor, resolved to establish a security network for the region. But since the move was mooted, the Inspector General of Police (IGP), Mohammed Adamu, had striven to head it off and cage it – canvassing community policing instead.

It appeared the Southeast governors were almost being seduced with IGP’s dodgy homily. Part of the deal was that the community members would be trained by the police to secure their areas.
But the arrangement did not go down well with the people of the Southeast, who saw it as a subtle plot to divert the regional initiative and retain command and control of the new outfit from the backdoor. Even Ohanaeze kicked against subsuming the new security structure under federal police. The governors ultimately got the message.

The Southeast regional governors’ move appears astute given that the crying regional security vacuum was, willy-nilly about to be filled with by a structure being created by the Indigenous Peoples of Biafra (IPOB) – so-called Eastern Security Network (ESN). But as IPOB is a proscribed organisation, it would be foolhardy to be seen to fraternise with it.
It could also be recalled that previous efforts to establish a joint regional security body for the region did not succeed due to the partisan dissonance in the ranks of the zone’s governors. Now, all this appears to be history.

Another important dimension to this latest development must not be glossed over. Since, after the Civil War fought to stop the secession of Biafra ended 50 years ago, any issues associated with the zone often generate extra sensitivity. Today, the region is one of the most militarised in Nigeria while crime is ratcheting up.

Against this background the body language of the governors or security modus operandi, or political signaling must deliberately not suggest that an embryonic republic is afoot. Those are the kind of gestures – whether real or imaginary – a jittery federal government is always on the lookout for.
This is the difference between the Southeast and Southwest regions, notwithstanding that they are operating the same security template.

More, although the state governors are assumed to be the chief security officers of their various states – in reality they are not. This amplifies the absurd fact that the current security architecture of the country is flawed – where Abuja calls the security shots.

The governors are glorified chief security officers, who lack authority to a large extent. No governor can effectively give directives to his state Commissioner of Police especially, when the Commissioner has a counter view or different instruction from Abuja. This scenario rubbishes the entire so-called chief security officer insignia of governors.

Also to tighten up any loose ends, the region’s state parliaments should enact requisite legislations to undergird the joint security structure. With this footing, Southeast’s ‘Amotekun’ can get cracking.
Pix: Southeast governors briefing the media on the state of play.jpg