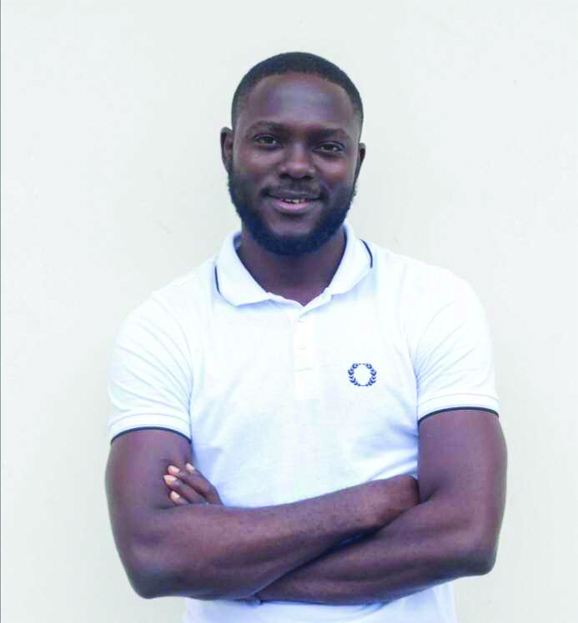 TSTTV Studio 2, Damilola Moses Opedun named the studio space, which was officially opened yesterday (on Saturday, January 16). TSTTV? It is the abbreviation of The Seed of The True Vine, a non-profit organisation that that focuses on the welfare and education of slum-dwelling children.

The space, acquired since July 22 last year, is located along Ajayi Aina Street in the Lagos mainland neighbourhood of Gbagada. “ [It is] very close to the Deeper Life Church headquarters,” explains Opedun, who says he owes it all to the help of the Almighty and the largesse of Kolapo Olaleye, a man he calls his role model in the Christian faith.
“We hope in this new year to build a wooden structure in Makoko for the children and that will be the studio One to enable us have more impact on the community in the area of education and poverty alleviation.”

Talking about the stilt town Makoko, Opedun is convinced that he had been given a “divine assignment” to impart on the slum community. Hence, his regular visits to the Lagoon-based shanty since January 2015. From that time till date, he had consistently held regular art classes for its children with the hope of transforming their minds and lives through art and the precepts of the Holy Scriptures.
These art classes, which initially were as many as thrice weekly, soon tapered off to just once a week – on Saturdays – when he got married on Saturday, April 25 that year.

Months before these classes could take off officially, precisely in September 2014, Opedun had visited the community’s elders to seek their consent so to speak. He had arrived this floating slum, where he hoped to impact on its residents through art, equipped with his palette, brushes and a clear vision. When he eventually got the nod of the elders – after their probable discrete investigations – he was set for his mission. “This vision has now become a thriving NGO that continues to be a blessing to the not-so-privileged children living in this slum,” he enthuses.

Besides the NGO, which was named The Seed of True Vine Foundation, he also developed a body of works he titled “Makovenice”. This title was derived from the prefixing of the northeastern Italian city of Venice with the first two syllables of the community’s name. “I was inspired to create this body of work, which unearths the diamond in the rough of an almost discarded land,” the artist says about the body of works. “[I also want] to show the beautiful side to the famous ‘slum’ and to become a voice for them, a bridge between them and the intellectual world, to give them the deserved attention and assistance.”

Then, in 2016, a group of starry-eyed students from the Yaba College of Technology’s art department came calling at his residence, soliciting for an internship programme in his studio. These students, who he recalled were about six in number, claimed that they were inspired by keenly watching him on social media. “They were so certain that I would be of blessing to them if I accept them.”
Opedun gladly welcomed these young acolytes, with whom he started working in earnest in a small compound at 10, Olufeyisan Street in the Lagos Lagoon-front neighbourhood Oworonsoki.

Flashback to his National Youth Service Corps year. He was living with this family in 2011, in whose house he had a first-hand experience of a corrupt family unit. He overheard the father of the house advising his son, who was about to sit for a university entrance examination, on how to use the answers to the leaked examination questions he had bought for him. “That was the day I understood the problem of our country,” he says. “It is the corrupt family unit and bad upbringing of children that has led to the decadence we see in our society today.

“Since that day, I vowed to dedicate my life in the service of building good moral values in anybody I come in contact with, especially those within my sphere of influence. This has since earned me the nickname ‘pastor’ among my peers. So, when the students came, I saw an opportunity not only to train them in the arts, but also an opportunity to positively change Nigeria within my sphere. This free training of higher institution, students, students from orphanages and the talented children of my neighbours has continued from 2016 till date.”

It was also during the NYSC programme that the 2010 Auchi Polytechnic graduate met the inspirational artist Sam Ovraiti. It was Ovraiti, who first drew his ignited his interest in the power of art. Subsequently, he began to see the links between art and spirituality after he watched the American singer and actress Beyonce Knowles-Carter in a YouTube video talk on an Oprah Winfrey Show about the help she gets from a spiritual being, called Sasha Fierce. Added to this were the inspirations he got from many quotes of the – credited to prominent people – bordering on the supremacy of spirituality over tangible dealings.

Opedun deems himself lucky to have been brought up by parents, who not only recognised his talents but also encouraged his childhood dreams of becoming an artist. “They both made sure I lacked no art materials and encouraged me to pursue my desire of becoming a professional artist,” he recalls.
Lingering doubts about art being his calling were dispelled after his primary and secondary school education in Ibadan. So, it surprised no one that he was enrolled at the Auchi Polytechnic, where he eventually became the best graduating student at the in 2010.

It was during his post-graduation years that he developed a predilection for the soft pastel medium, which earned him an award the Pastel Society of America’s annual juried exhibition. But, he would later adopt the oil paint medium as his number one choice because of the limitations of the pastel medium. The oil paint medium, he discloses, allows him an unhindered expression.

A regular in the local exhibition circuit, the 37-year-old has been a part of the Mydrim Gallery’s annual The Generation: Future Masters Series art exhibition right from its inception. He was featured in October 2015, as an “Up and Coming Nigerian Pastelist”, in a website: www.howtopastel.com, run by one Gail Sibley and one of his paintings appeared in a popular French art magazine. Two years later, he participated in the juried 45th annual exhibition of The Pastel Society of America, where his work won The Jack Richeson & Co. Silver Award.
Pix: A section of the TSTTV studio.jpg and Opedun.jpg