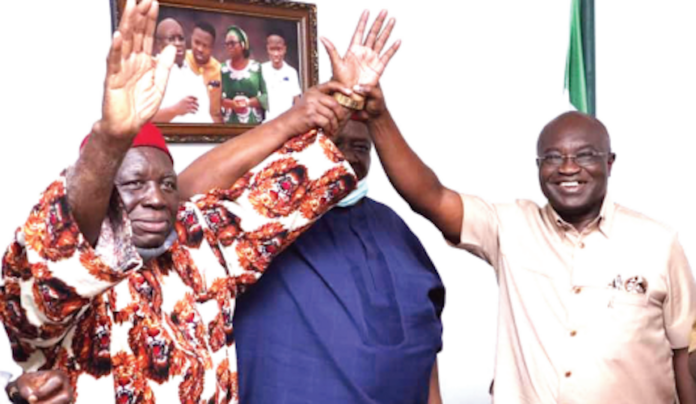 Obiozor emerged victorious after defeating two other contestants in the election held yesterday in Owerri.

Obiozor, a former Ambassador to the United States and Israel, polled a total of 304 votes to defeat Chief Valentine Oparaocha who scored a total of 15 votes and Chief Uju Savior Okoro who had three votes.

However, the position of Deputy President General was won unopposed by Obi Wali of Rivers State while Okey Emuchay from Abia State emerged the secretary-general after garnering 265 votes to defeat his rivals.

Speaking on behalf of the South-east Governors’ Forum before the commencement of voting, Chairman of the forum and Governor of Ebonyi State, Mr. Dave Umahi, commended the outgoing President General, Nnia Nwodo, for conducting a successful election in spite of the efforts of the Igbo detractors.

Umahi stated that South-east governors endorsed the process and would stand by the outcome of the election.

He tasked the incoming executive to continue to let the same spirit of love for Ndigbo continue.
The governor added that they should continue to fight for the unity of Nigeria as that according to him, will benefit Ndigbo more.

He lamented that South-east governors have been singled out for castigation because “we’ve always supported the unity of this country. But one thing we hold very dear is our love for Ndigbo. That comes first before political party. We don’t care what people say about that.”

Imo State Governor, Hope Uzodimma, thanked South-east governors for playing an important role in the unity of the people.

He described the electoral process and its outcome as “a new order, a new rapprochement, a new attitude and a new Igboness.

“My happiness is because Igbos are together against the wishes of some people who don’t wish us well.

“We’ve always come first in everything. Why we are behind is because the spirit I’m seeing here today was absent. We must go back to history to find our roots,” Uzodimma added.
Nwodo thanked Ndigbo worldwide for the support given to his executive and urged them to give same to the incoming executive.

He described the absence of those who were trying to destroy the organisation as people who did not mean well for Ndigbo.