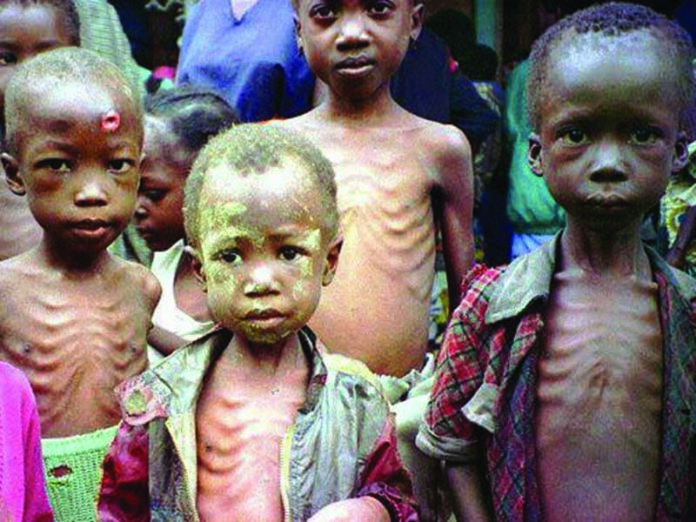 Government must do more to create wealth among the people
An estimated 10.4 million children in seven countries, including Nigeria, will suffer from acute malnutrition in 2021, the United Nations Children’s Fund (UNICEF) said in a statement last week. The other countries cited are Democratic Republic of the Congo (DRC), Burkina Faso, Mali, Niger, Sudan, South Sudan and Yemen.

In the Northeastern part of Nigeria alone, the United Nations agency said over 800,000 children are expected to experience serious deprivation, about the same number Borno State Governor, Professor Babagana Zulum said last are starving across 11 communities in his troubled state. The cost of disregarding this issue in human and economic terms cannot be quantified. Malnutrition implies a marked increase in the child’s susceptibility to infections and contributes to child mortality.

Invariably, pregnant women who are not adequately nourished eventually give birth to babies with low weight thus putting their survival at risk. Nigeria is reputed as having the second highest burden of stunted children in the world, with a national prevalence rate of 32 per cent of children under five. An estimated two million children in the country also suffer from severe acute malnutrition (SAM) while only two out of every 10 children affected are currently reached with treatment, according to UNICEF. Seven per cent of our women of child-bearing age also suffer from acute malnutrition.

Given the dire statistics, unless government takes immediate steps to address hunger and malnutrition, especially in children and pregnant women, our poor indices on maternal and child mortality can only further worsen. Indeed, if concerted and deliberate action is not taken, millions of Nigerian children will be physically and mentally stunted with their lives devastated perhaps forever. Political commitment is therefore necessary to ensure advocacy on the adverse implications of malnutrition and how to avoid its devastating consequences. Partnership with civil society and academic institutions with focus on food and nutrition is also an imperative.

However, such political commitment is best demonstrated by a tangible increase in resource allocation, with the relevant ministries and agencies committing to establish a road map and coordinated mechanisms for implementing activities for up-scaling nutrition in the public sphere. This road map should consist of clear roles and responsibilities for the various stakeholders, as well as implementable strategies, with milestones for mainstreaming nutrition into agriculture, fortifying basic foods with essential minerals or vitamins, mobilising communities for action on the need for growing more beneficial foods, and the perils of malnutrition.

Even though malnutrition is the underlying cause for a third of child mortality in the world, it is yet to receive the nature of high-profile campaigning and investment necessary to address it effectively, in comparison with other causes of child mortality such as malaria and HIV/AIDS. Consequently, while child mortality rate caused by malaria has shrunk by a third since 2000, child malnutrition has remained a huge challenge over the same period. For effective health and social protection, mothers must be encouraged to adopt exclusive breastfeeding habits for their babies in the initial six months of their lives. Thereafter, complementary feeding can be introduced for 24 months, in addition to the consumption of various nutrients such as Vitamin A, iodized salt and zinc, amongst others.

Nigerians, as a minimum, deserve a life free from hunger in a country blessed with arable land and natural resources. Unfortunately, both poverty and hunger continue to saturate our country’s landscape, exacerbated by the pervasive insecurity across the country. Hunger is both a cause and consequence of poverty, as people on low income tend to have worse diets, while people who lack adequate nutrition struggle harder to extricate themselves from poverty. Our governments, at practically all levels, need to sit up and confront malnutrition with resolute decisiveness if the future of our children is to be secure.

Quote
Nigerians, as a minimum, deserve a life free from hunger in a country blessed with arable land and natural resources