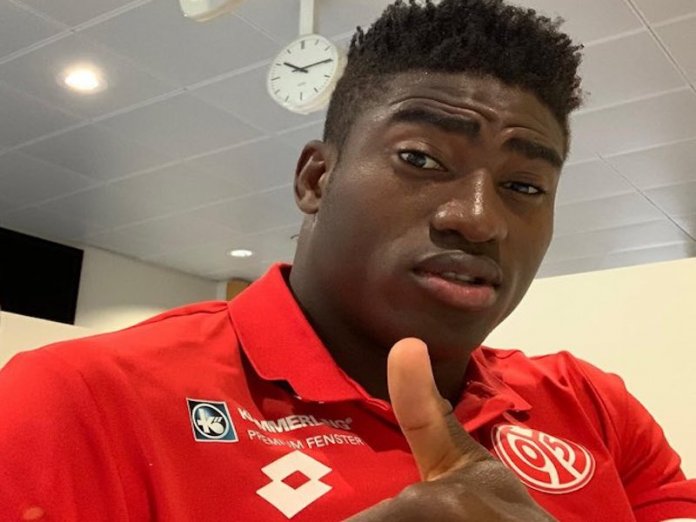 Nigeria under-23 international Taiwo Awoniyi has opened up about his scintillating form in the German Bundesliga.
The bulky centre forward has scored five goals in his last seven league matches for Union Berlin.

Awoniyi, who is on loan at Berlin from English champions Liverpool FC, has netted five goals from 12 league matches this season.
The 23-year-old player explained that he is only focused on helping Berlin in the Bundesliga with his contributions in front of goal.

“For me, it’s always about the team. Always fighting, working, doing everything for the team,” Awoniyi told the Bundesliga website.
“And for a striker, I believe once you put that first, the rest of the things will come.”

Berlin are currently placed on the UEFA Europa League spot (fifth) on the Bundesliga standings – a point behind fourth-placed Borussia Dortmund.

Awoniyi moved to Anfield in 2015 but he is yet to play a match since his arrival and the Nigeria youth star has stated he prefers to leave Liverpool after failing to secure a work permit in the UK since his arrival in 2015.

Awoniyi joined the Reds five years ago following his heroics at 2013 FIFA U-17 World Cup and 2015 Africa U-20 Championship where he helped Nigeria win both tournaments in the United Arab Emirates and Senegal respectively.
Since his move to Liverpool, the 23-year-old has had seven loan stints in clubs across Germany, the Netherlands and Belgium.

He disclosed his ambition to play for the reigning Premier League champions but he was left with second thoughts after another loan deal was agreed with Union Berlin in September for the entire 2020-21 season.

“It is my dream to play for Liverpool. But me playing for Liverpool has to do with getting my work permit,” Awoniyi told ESPN.

“Without it, there is no chance for me discussing about playing for Liverpool for now.
“This season was maybe a bit tough to make the decision because honestly, I was hoping to leave permanently.

“Liverpool have been great, they have been so supportive and we always talk with the director and every time, they tell me to be patient.
“But the reason I discussed something permanent this season was just that I felt most loans I have been to, have not really been the way I want it.

“And I felt like it happens that way because the loan players get less of an advantage than the players of their own club.
“That was what made me think, okay, maybe it’s time to find a home with my family in my new club.”

He will be hoping to be included in the next Super Eagles squad by the national team head coach Gernot Rohr.
Nigeria are scheduled to face Benin and Lesotho in the 2022 AFCON qualifiers in March 2021.

Reading to Block Olise’s Transfer Amidst Chelsea, Liverpool Interest
Reading coach Veljko Paunovic has reiterated that France youth international of Nigerian descent Michael Olise is not for sale amid speculation linking the midfielder with a departure from the club in the January transfer window.

The likes of Liverpool, Chelsea, Arsenal, Leeds United and Leicester City are believed to be keeping tabs on Olise who is regarded as one of the most exciting teenagers outside the Premier League.

Olise has been involved in 12 goals (four goals, eight assists) from 22 Championship appearances so far this season.

Paunovic gave an update on the future of the French-Nigerian teenager in Thursday’s press conference ahead of his side’s meeting with Luton Town in the third round of the Emirates FA Cup.

“We’re very happy with the progress of Omar and the relationship we are building and I’m hopeful we can have both – together with Olise – but we’re not going to get involved in the rumours,” Paunovic was quoted as saying by Get Reading.

“It’s important how we feel about each other and if we want to continue working together and I think that is the case with all of them.”
Olise is in the final eighteen months of his contract with Reading, whom he joined in 2016 after spells with the youth teams of Chelsea and Manchester City.