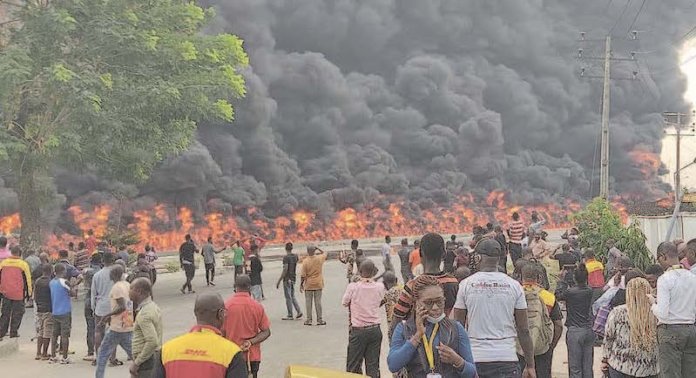 Many lives were yesterday lost when a petrol tanker exploded on the busy Apapa-Oshodi expressway in Lagos State.

The explosion took place at the Toyota area closed to the popular Ladipo spare parts market at the Oshodi area of the state.

Although the casualty figure cannot be ascertained as the fire was still raging, THISDAY gathered that the accident happened just by the bridge leading to Isolo from Mushin as the driver lost control of the vehicle causing the truck to overturn around 9.30 a.m. and burst into flame immediately.

Many people were said to be at the area when the accident occurred.

Firefighters were at the scene of the incident battling the inferno, even as officials of the Lagos State Traffic Management Authority were also on ground to divert vehicles to alternative routes

The Director-General of the Lagos State Management Agency, Olufemi Oke-Osanyintolu, said the fire incident occurred after the body of the truck detached from the head, adding that emergency responders are now at the scene of the incident to salvage the situation.

“The agency has activated its emergency response plan after a fuel tanker caught fire when the body detached from the vehicle head.

“Responders are on the scene to extinguish the fire. Motorists are to use alternative routes. Further updates will be communicated to the public later,” he stated.