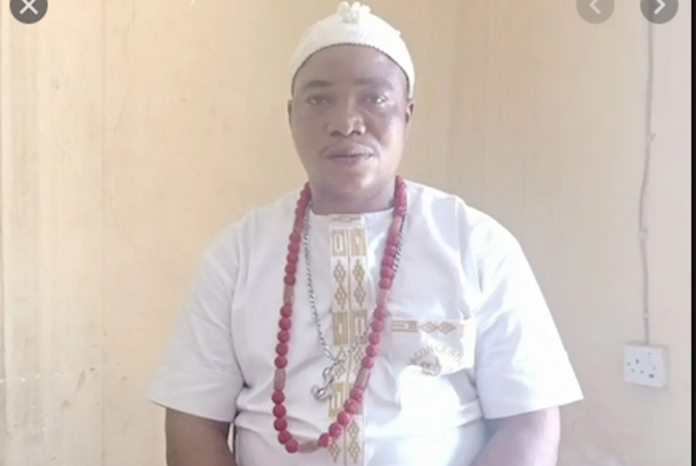 The traditional ruler of Ode community in Akure North Local Government Area of Ondo State, the Ajagunode of Ode community, Oba Adewale Boboye, has petitioned the Inspector General of Police (IG), Muhammed Adamu, over an alleged murder of three of his kinsmen, arson and wanton destruction of property by some assailants who invaded his palace last December.

The monarch, in the petition, alleged that some individuals in the community masterminded the killing of three people in his palace and supervised the burning and destruction of his palace on December 10, 2020.

The petition was written on behalf of the traditional ruler and signed by his solicitor, Abiodun Amole of Messr Adeniyi Akintola (SAN) and co.

He alleged that some 17 individuals were behind the destruction and killing of the three people in Ajagunode palace.

The Oba counsel listed the three people murdered by the hoodlums who invaded the palace in the middle of the night to include his younger brother, Adebayo Boboye; the monarch’s driver, Sunday Moses Owoeye, and Sola Osokute.

The solicitor stated in the petition that “we act as solicitors to His Highness, Oba Adewale Sunday Boboye, the Ajagunode of Ode community in Akure North LGA of Ondo State (hereinafter referred to as ‘our client’) and on whose instructions we forward this complaint.

“We have the instructions of our aforementioned client to bring to your attention for necessary action against the unlawful/criminal invasion of his palace on December 10, 2020, at about 1a.m. by a group of assailants among whom are the following persons: Oluwole Kareem (Oluomo), Martins, Kole, Jenyo (Dapada), Shina, Eleyele, Muyiwa Akinsulu (Ooye), Eniola Alukundu, Samson Ajayi (Elemo), Kehinde (Egbo), Prince, Tarcle (Egbera Boy), Rotimi Chairman (Babane), Peter Meko, Olopa Yellow, Olopa Martins, and Chairman Olokada.

“The aforementioned persons with other accomplices invaded our client’s palace in Ode community on the aforementioned date while armed with dangerous weapons murdered three persons in cold blood.

The petition stated further that: “They had earlier on December 3, 2020, burnt our client’s palace and cars, and carted away valuables such as plasma television sets, a power generating set and freezers in the process.

“They in fact attempted to murder our client, who was only lucky to escape assassination having missed death by whiskers.

“Our client now lives in apprehension as the gory incident had caused him untold psychological, mental and emotional trauma and has also prevented him from carrying out his day-to-day function as the traditional ruler of his community the Ode community.”

According to the solicitor, “Our client had caused a complaint to be made to the Attorney General and Commissioner for Justice, Ondo State, when the assailants first invaded his palace on December 3, 2020, but nothing was however done by the Attorney General until December 10, 2020, when the assailants again invaded the palace and murdered the aforementioned victims of their criminal attack in cold blood.

“The development indeed leaves much to be desired and calls for urgent intervention of the relevant authorities at the force headquarters.”