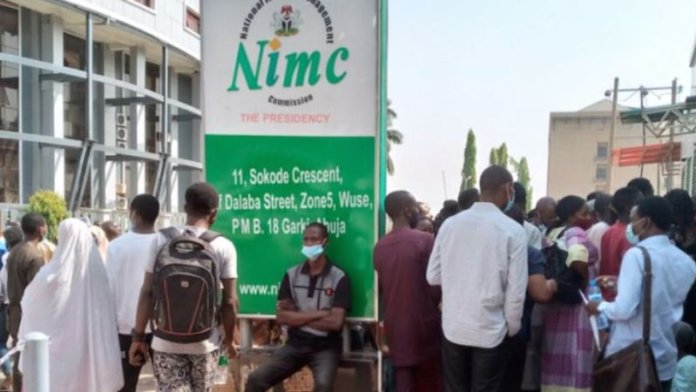 Emma Okonji in Lagos and Hammed Shittu in Ilorin

The National Identity Management Commission (NIMC) yesterday announced the suspension of the enrolment for the National Identity Number (NIN) nationwide following an industrial action commenced by its staff who are demanding a better welfare package.

The staff shut down operations and suspended enrolment of NIN in all their branch offices nationwide.
Head of Communications at NIMC, Mr. Kayode Adegoke, who confirmed the strike, however, said NIMC would issue a statement in response to the strike.

But NIMC, on its official twitter handle yesterday, said: “NIMC wishes to assure members of the general public that glitches experienced in the enrolment process were being resolved and normal enrolment would resume shortly. We apologize for any inconvenience caused and wish to assure you of our continued excellent service.”

The Minister of Communications and Digital Economy, Dr. Isa Ibrahim Pantami, had in December last year, directed the Nigerian Communications Commission (NCC), to enforce the implementation of the integration of all registered SIM cards with NINs and gave a window of two weeks to complete the exercise. The deadline was later extended by six weeks to end January 19, 2021, for those who have already registered for NIN and February 19, 2021 for those who were yet to register for NIN.

Pantami warned that subscribers who failed to integrate their SIM cards with their NINsp would risk outright disconnection of their SIM cards.
The fear of being disconnected compelled Nigerians to throng the offices of NIMC nationwide, to enrol and obtain their NINs, a situation that led to unprecedented crowd at all NIMC’s branch offices nationwide.
Worried about the crowd, which became difficult to manage, NIMC staff demanded better welfare package and additional work tools to manage the situation.

However, the inability of government to meet their demands led to the strike action.
The NIMC unit of the Association of Senior Civil Servants of Nigeria (ASCSN) directed members to embark on the strike, after its congress held on Wednesday.

In a communiqué released at the end of the congress and signed by the union’s Secretary, Mr. Victor Odia, and representative of ASCSN NIMC unit, Mr. Micheal Asekokhai, the workers said the strike became necessary to address issues of poor welfare package, lack of tools and risk of exposure to coronavirus during enrolment.

“The meeting was convened to discuss the state of the exposure of staff members to COVID-19, the salary structure, its representation in the annual appropriation, the irregularities in the conduct of promotions and the personal protection and safety in light of the COVID-19 pandemic,” the communiqué stated.

The workers are also demanding a review of the ‘lopsided and irregular’ promotions done in 2017 and 2020, implementation of the approved salary structure and its appropriation in the 2021 annual budget as well as adequate provision of work tools for civic data enrollment.

They are also demanding the provision of adequate monthly operational stipends, work tools necessary for the process of enrolment of civic data. The work tools include power and connectivity (airtime and data connectivity), enrolment systems and peripherals, stationeries and consumables such as NIN slips, enrolment forms, and A4 papers.

The union asked all NIMC staff to suspend all enrolment activities with immediate effect pending when their demands are met.
“Consequent upon the just-concluded congress of the above-mentioned association that took place on January 6, 2020, the unit executive directs all members on grade level 12 and below in the head office and state offices to report to their respective duty posts from January 7, 2020, and do nothing.

“All members at the local government offices and special centres are advised to stay away from their various centres as task force and implementation committees would be on parade to ensure total compliance with the directive.”
Meanwhile, thousands of applicants who went for enrolment yesterday, were locked out and were not attended to.

In Lagos and Ilorin in Kwara State, hundreds of applicants who went for enrolment were locked out at various NIMC offices, following the strike.
During a visit to NIMC offices in Ilorin yesterday, many applicants who had arrived as early as 7am were disappointed as the gates to the entrance of the office were locked by security officials.

Also, reports from the NIMC offices at the University of Ilorin, Offa, Share, Unity area of Ilorin, among others, showed that the workers were not available to attend to the applicants.
Some of the applicants appealed to the federal government to meet the demands of the NIMC workers, in order not to truncate ongoing registration exercise.
They said a positive government response to the demands would go a long way to help the workers meet all set deadlines for NIN.