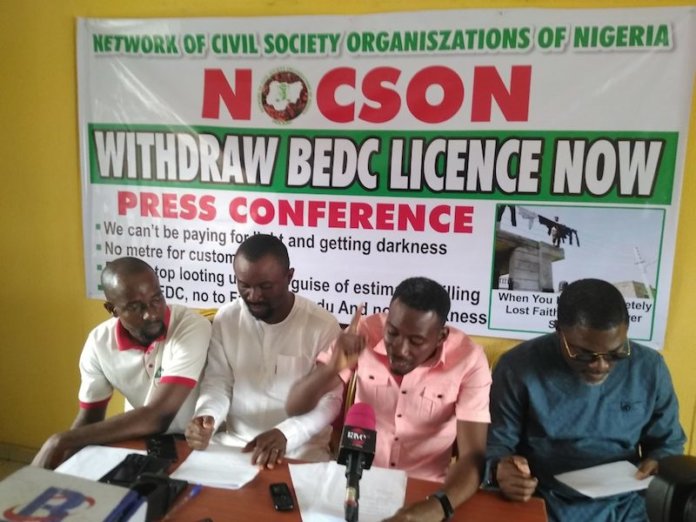 Coalition of civil society groups under the umbrella of Network of Civil Society Organisations of Nigeria (NOCSON) yesterday issued a 48-hour ultimatum to the police to publish the names of all the detainees that escaped from the custody of the State Criminal Investigation Department (SCID), Edo State Police Command, on New Year Day as well as names of police officers on duty on the day of the incident.

On January 1, 2021, 10 suspects detained at the Police SCID were reported to have escaped from detention.

In a statement issued by the state Police Public Relations Officer (PPRO), Chidi Nwabuzor, who acknowledged the incident, said two of the escapees have been re-arrested.

However, while addressing a press conference in Benin-city, the acting President of NOCSON, Ogbidi Emmanuel, and Director of Publicity, Bevy Efe, flanked by other members of the coalition, said they were shocked that such incident could happen in the most secure police facility in the state without any external attack.

The coalition added that it perceived sabotage, and it is not encouraged by the report when it visited the state police command on a fact-finding mission.

It said it has become clear that the break-in at two correctional facilities in the state during the #EndSARS protest was not done by the protesters, therefore, wants the state government to set up an inquiry into the two jail breaks.

According to the civil society organisation, “The Edo State Police Command must within 48 hours publish the names, photographs and information of all the escapees on both local and national prints as well as electronic media declaring them wanted.

“The police must also detain and isolate all officers who were on duty, including the senior officers that had dealings with the cell 24 hours before the incident, as we cannot rule out their possible contact with the criminals on the run; and their identities be made known to the public.”

While insisting that there is more to this than meets the eyes, the group further declared: “We, therefore, call on the state Governor, Godwin Obaseki , as the Chief Security Officer of the state to as a matter of urgency constitute a panel of enquiry to investigate the circumstances surrounding the recent jail break in the two correctional centres in Edo State, as we believe is unconnected to the #EndSARS protest.

“The Nigerian Police Force must do everything possible to ensure effective policing in the state and put internal mechanisms in place to prevent future occurrence as well as strive to restore the confidence of the Edo people in the police.”