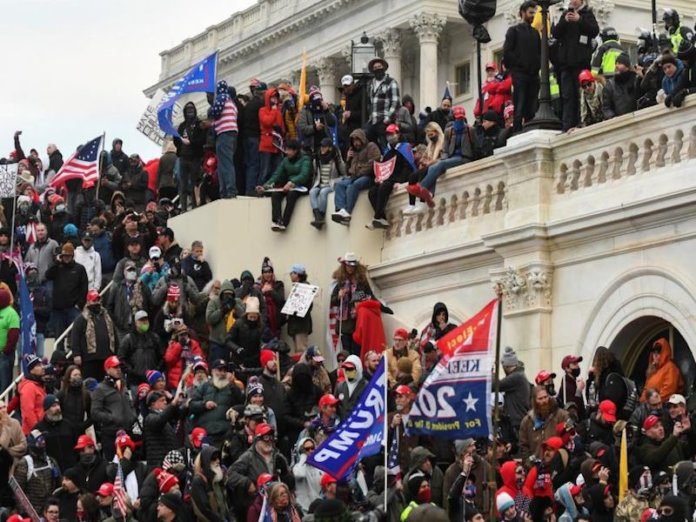 •Certification of Biden’s win resumes after disruption
•Pence to mob: you didn’t win

The process was interrupted as hundreds of Trump supporters invaded the U.S. Capitol as part of efforts to overturn his election defeat.
Pence, in his opening remarks, condemned the invasion, telling the mob that they didn’t win as violence never wins.
Senate Majority Leader, Senator Mitch McConnell, also said they would not be deterred by the insurrection in discharging their duties.

A report by Reuters said the US police evacuated lawmakers and sought to clear the Capitol Building of the Trump supporters, who surged through the halls of Congress in shocking scenes broadcast across the globe.
One protester occupied the Senate dais and yelled: “Trump won that election.” Protesters overturned barricades and clashed with police as thousands descended on the Capitol grounds.

However, the police declared the Capitol building secure shortly after 2230 GMT, more than three hours after it was breached.
Earlier, the protesters had raised a large wooden cross on the premises, and one person carried a Confederate battle flag into the Capitol.

One group of protesters apparently reached the offices of House Speaker Nancy Pelosi, which had been evacuated so rapidly that emails warning of the violence were still visible on office computers.
Pence called on the rioters to leave the Capitol immediately, saying the violence and destruction “must stop now”.
The president-elect has condemned the invasion, calling on Trump to call his supporters to order immediately.

But Trump’s spokeswoman, Kayleigh McEnany, tweeted that the National Guard was being deployed.
Police ordered the evacuation of several office buildings.
Capitol Police sent orders for Congressional staff to leave the Cannon building and other large offices.
“Just evacuated my office in Cannon due to a nearby threat. Now we’re seeing protesters assaulting Capitol Police,” said Representative Nancy Mace in a tweet.

“This is wrong. This is not who we are. I’m heartbroken for our nation today,” she wrote.
Consequently, the Senate and the House quickly recessed.
However, as the tension rose over the invasion, Trump, in a recorded speech, called on his supporters to go home while repeating his disputed claim that his victory in the last year’s presidential election was stolen.

Earlier yesterday, Trump had told a rally of his supporters outside the White House that he would never concede that he lost the election, as Congress readied to certify Biden’s victory.

“I will never give up. We will never concede,” Trump told the cheering crowd. “We will stop the steal.”
As part of efforts to combat the insurrection, Washington, D.C., Mayor Muriel Bowser, ordered a citywide curfew that will begin at 6 p.m. on Wednesday and remains in effect until 6 a.m. Thursday.

“During the hours of the curfew, no person, other than persons designated by the mayor, shall walk, bike, run, loiter, stand or motor by car or other mode of transport upon any street, alley, park or other public place within the District,” Bowser said in her order.

Video showed the Trump supporters breaking windows and police deploying tear gas inside the building. Washington Metropolitan Police Chief Robert Contee said members of the crowd used chemical irritants to attack police and several had been injured. One civilian died after being shot during the mayhem, local media said. The FBI said it had disarmed two suspected explosive devices.

It was the most damaging attack on the iconic building since the British army burned it in 1814, according to the U.S. Capitol Historical Society.
The chaotic scenes unfolded after Trump, who before the election refused to commit to a peaceful transfer of power if he lost, addressed thousands of protesters, repeating unfounded claims that the election was stolen from him due to widespread fraud and irregularities.

Biden, a Democrat, who defeated the Republican president in the November 3 election and is due to take office on January 20, said the activity of the protesters “borders on sedition.”

The former vice president said that for demonstrators to storm the Capitol, smash windows, occupy offices, invade Congress and threaten the safety of duly elected officials: “It’s not a protest, it’s insurrection.”
He urged Trump to demand “an end to this siege” on national television.

In a video posted to Twitter, Trump repeated his false claims about election fraud but urged the protesters to leave.
“You have to go home now, we have to have peace,” he said, adding: “We love you. You’re very special.”
Twitter Inc later restricted users from retweeting Trump’s video, and Facebook Inc took it down entirely, citing the risk of violence.

Twitter said future violations of its rules will lead to permanent suspension of Trump’s account.
Pence, who had presided over the joint session of Congress, had already been escorted from the Senate.
Lawmakers had been debating a last-ditch effort by pro-Trump lawmakers to challenge the results, which was unlikely to succeed.
Critics had called the effort by the Republican lawmakers an attack on American democracy and the rule of law and an attempted legislative coup.

The top two Democrats in Congress, House of Representatives Speaker Nancy Pelosi and Senator Chuck Schumer, called on Trump to demand that all the protesters leave the Capitol and its grounds immediately.

Capitol Police told lawmakers in the House chamber to take gas masks from beneath their seats and ordered them to drop to the floor for their safety. Officers drew their guns as someone tried to enter the House chamber.
Police piled furniture against the doors of the House chamber as protesters tried to break them down, Democratic Representative Jason Crow said on MSNBC.

Several hundred House members, staff and press were later evacuated to an undisclosed location.
Election officials of both parties and independent observers have said there was no significant fraud in the November 3 contest, which Biden won by more than seven million votes in the national popular vote.

Weeks have passed since the states completed certifying that Biden won the election by 306 Electoral College votes to Trump’s 232. Trump’s extraordinary challenges to Biden’s victory have been rejected by courts across the country.
Trump had pressed Pence to throw out election results in states the president narrowly lost, although Pence has no authority to do so.

“Our country has had enough and we will not take it any more,” Trump said at the rally.
The certification in Congress, normally a formality, had been expected to stretch for several hours as some Republican lawmakers mounted an effort to reject some state tallies, starting with Arizona.

Republicans and Democrats, who had been bitterly divided over that effort, both called on the Trump supporters to stand down.
“This is un-American and this has to stop,” said House Republican leader Kevin McCarthy, a Trump ally who supported the Republican effort to challenge the results.

That attempt was unlikely to succeed, as even many Republicans opposed it.
“If this election were overturned by mere allegations from the losing side, our democracy would enter a death spiral,” said Senate Majority Leader Mitch McConnell, who helped give Trump some of his biggest accomplishments.

“We will never give up,” Trump earlier told thousands of cheering supporters on a grassy expanse near the White House called the Ellipse. “We will never concede. It doesn’t happen.”
Trump called on Pence to overturn the election results as he presided over the debate in Congress. “If you’re not, I’m going to be very disappointed in you,” Trump said.

The U.S. Constitution does not give Pence the power to unilaterally overturn the results of the election, and the vice president said in a statement he could not accept or reject electoral votes unilaterally.
The violence stunned world leaders. “Trump and his supporters must accept the decision of American voters at last and stop trampling on democracy,” German Foreign Minister Heiko Maas said.

Business groups, normally staunch allies of Republicans in Washington, also reacted strongly. The National Association of Manufacturers said Pence should consider invoking a clause in the constitution that allows a president to be removed from office when he is unable to do his job.
“This is sedition and should be treated as such,” said the group’s president, Jay Timmons.

Grisham was one of the longest-serving Trump administration officials, having begun her tenure working for then-candidate Donald Trump in 2015 as a press wrangler on the campaign trail.

Congress Speaker Nancy Pelosi, in a statement yesterday, said the attempted takeover of the Capitol would not “deter us from our responsibility to validate the election of Joe Biden”

“We always knew this responsibility would take us into the night. We also knew that we would be a part of history in a positive way today, despite ill-founded objections to the Electoral College vote.
We now will be part of history, as such a shameful picture of our country was put out to the world, instigated at the highest level.

“What we have seen today is unlawful and unacceptable. I have decided I will vote to uphold the Electoral College results and I encourage Donald Trump to condemn and put an end to this madness.…
“What happened today and continues to unfold in the nation’s capital is disgraceful and un-American.

“Thugs assaulted Capitol Police Officers, breached and defaced our Capitol Building, put people’s lives in danger, and disregarded the values we hold dear as Americans. To anyone involved, shame on you,” Rodgers said in a statement.

Republican lawmakers are also pressing the Trump loyalists in their party to abandon their objections to President-elect Joe Biden’s win as lawmakers huddle in an undisclosed location to wait out the siege of the Capitol, according to multiple people familiar with the effort.

The intervention from Republicans is focused on the GOP lawmakers who have been spearheading the electoral college challenges, including Senators Josh Hawley (Mo.) and Ted Cruz (Tex.). Republicans eager to end the standoff are exerting similar pressure on the president’s supporters in the House, as leaders try to work out how they can bring the certification process to a swift end, while lawmakers remain unable to reenter the Capitol.

According to one person familiar with the objectors’ thinking, the effort is working. Trump’s supporters are acutely aware, the person said, that it would be untenable to continue their objections once the session is resumed, even if they have yet to admit it and formally withdraw their complaints.