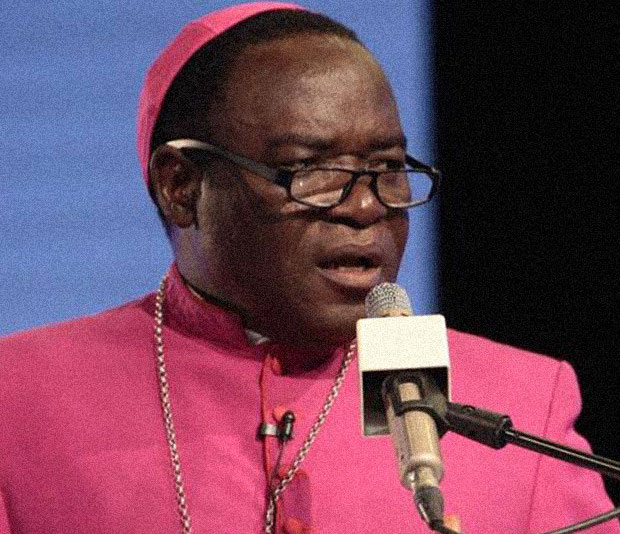 Catholic Bishop of Sokoto Diocese, Most Rev. Dr. Matthew Hassan Kukah, has that there should be a sense of urgency in trying to salvage the country from the present critical state.

The fiery priest said the levels of frustration in the country are rising by the day, adding that this could seen in the rise in domestic violence and inter-communal conflicts.

In his sermon at the Wake keep Mass for His Grace, Archbishop Peter Yariyock Jatau at St. Joseph’s Catholic Cathedral, Kaduna on Tuesday, Kukah rebuked corrupt politicians, accusing them of adopting contractocracy as a governance mechanism.

He said: “Today, our dear nation is like the proverbial farmer searching for his black goat. He has to do it with a sense of urgency because darkness is setting in as the sun quickly recedes.

“Our nation has become one huge waste land, huge debris of the deceit, lies, treachery, double dealing and duplicity. Nigerian politicians have turned our politics into a huge trojan horse, a hoax, a hall of guile and dissimulation.

“The levels of frustration are rising by the day and we can see all this in the rise in domestic violence and inter-communal conflicts. A combination of all these has turned us unto a nation at war with itself,” he said.

Rev. Kukah also spoke about shortcomings in governance and how its failings has imparted negatively on the citizens.

In the sermon titled, “A Nation in Search of Its Soul”, Kukah mocked corrupted government officials who pretend to religious while wallowing in sinful lifestyle.

“Nigerians complain that the country is full of churches and mosques and they cannot find the values of these religions in everyday life. We sin at home by stealing the nations resources but we seek repentance and forgiveness in Saudi Arabia and Jerusalem in the guise of lesser or higher pilgrimages.

“We make money from abandoning projects duly paid for by governments which have adopted Contractocracy as a governance mechanism. We are allowing others to use our money to develop their own infrastructure. Our elite all assembled in Dubai for Christmas and also to welcome the New Year.

“As virtue recedes into the sunset in our country, there is an urgent need for us to pause and take stock of what is required to save our country,” he said.

Kukah said that remembering Archbishop Jatau is an opportunity to recall the contributions of Christian Missionaries and Christian education to laying the foundation for the production of the quality and caliber of men and women of yesterday whose legendary moral fiber still resonates in Nigeria today.

“As I stand before you, I feel pulled between the poles of honour, humility and trepidation. I am honoured and humbled to be asked to preach in the wake keep of our beloved father, grandfather and great grandfather in the faith, His Grace, Archbishop Peter Yariyock Jatau.

He said late Archbishop Peter Jatau took over the mantle of leadership, raised the bar and by sheer diplomatic efficiency, sought to forge and strengthen a viable relationship between the Church and State.