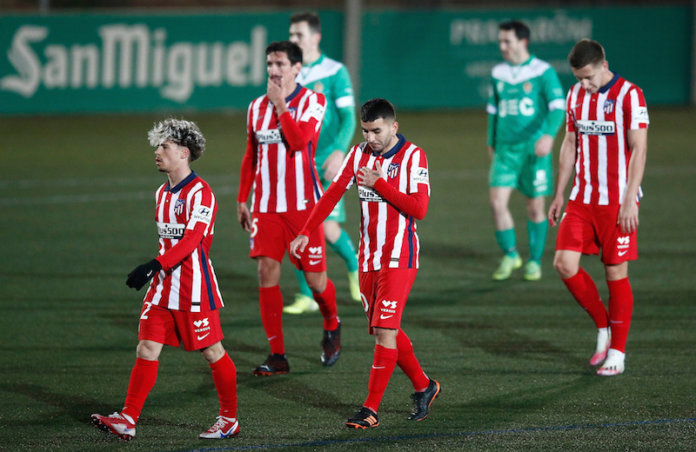 LaLiga leaders Atletico Madrid crashed out of the Copa del Rey on Wednesday after suffering a shock second-round 1-0 defeat by third-division Cornella.

Cornella sit seventh in their Segunda B division, Spain’s third tier, but deserved a historic win thanks to a volleyed finish by Adrian Jimenez in the seventh minute.

Atletico’s task became tougher when 20-year-old Ricard Sanchez was sent off in the 63rd minute, while Saul Niguez hit the crossbar in the first half.

Diego Simeone also left out some key players including Luis Suarez, Koke, Marcos Llorente and Yannick Carrasco, with Joao Felix taken off in the second half when they needed an equaliser.

But Atletico also struggled for fluency and chances against an far less prestigious opponent, who had lost to Barcelona’s second team in their previous match in December.

The defeat makes it consecutive seasons that Atletico have lost to a third-tier side in the cup after they were knocked out by Cultural Leonesa 12 months ago.

It also raises the stakes ahead of two tough games in LaLiga against Athletic Bilbao this weekend and then Sevilla, even if one less competition could aid their title challenge in the coming months.

Atletico could be without Felix against Bilbao after Simeone confirmed afterwards he took a knock to his ankle. Jose Gimenez also went off injured early on and looks unlikely to feature on Saturday.

Jiminez gave Cornella the lead with a hooked finish, connecting brilliantly with Agus Medina’s cross at the near post to put his team in front.

Saul struck the crossbar soon after, a weaving run and shot from Angel Correa causing the ball to pop out to the midfielder in the penalty box.

Yet Cornella were never unduly troubled and played the last half an hour with an extra man after Atletico’s Sanchez picked up a second yellow card for leaving a foot in on Cornella’s goalkeeper.

Real Betis had earlier beaten UD Mutilvera 3-1 to reach the next round while Levante, Elche and Granada also made it safely through.