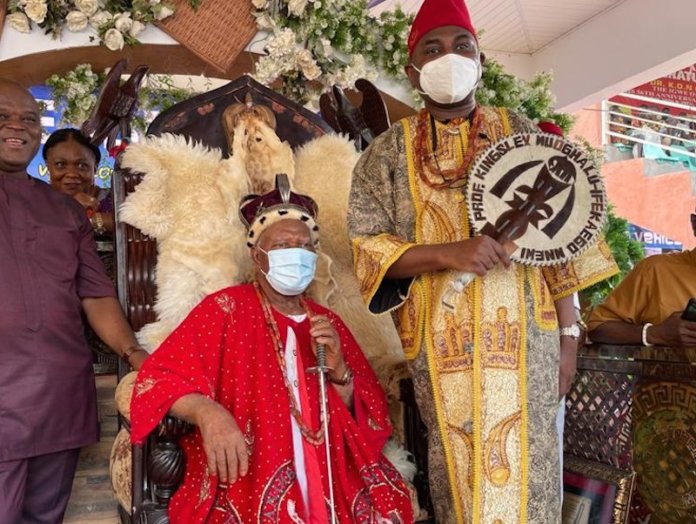 Chiamaka Ozulumba writes that Professor Kingsley Chiedu Moghalu, former Deputy Governor of the Central Bank of Nigeria and a presidential candidate in the 2019 elections, was recently conferred by the Igwe of Nnewi, HRH Dr. Kenneth Orizu III with the traditional chieftaincy title of “Ifek’ego Nnewi” meaning “that which is greater than money”

Professor Kingsley Chiedu Moghalu, former Deputy Governor of the Central Bank of Nigeria and a presidential candidate in the 2019 elections, was recently conferred with the Nnewi traditional chieftaincy title of “Ifek’ego Nnewi” (“that which is greater than money”) by the Igwe of Nnewi, HRH Dr. Kenneth Orizu III.

The title was conferred by the monarch of the 600 year-old hereditary kingdom at a colourful ceremony in Nnewi during Igwe Orizu’s 57th annual Ofala festival on December 28, 2020. With this recognition, Dr. Moghalu is now a member of the prestigious Body of Titled Chiefs of Nnewi, one of Nigeria’s most dynamic commercial towns.

Igwe Orizu, 95 years old and Africa’s longest serving monarch having clocked 57 years on his throne, said that he conferred the Ifek’ego title on Moghalu “in recognition of your meritorious contributions to the development of Nnewi town”. Thousands of Nigerians reacted with passionate approval of Moghalu’s chieftaincy conferment on social media. “Big congrats to a great man, Prof. @MoghaluKingsley for his well deserved chieftaincy title as the Ifek’ego 1 of Nnewi. May you keep inspiring us. Greater years ahead, sir”, wrote Laz Ude Eze, a medical doctor, on Moghalu’s Twitter handle where he broke the news of his honour. “You are truly ‘greater than wealth’; a well-deserved award”, wrote Zakar Isma’il Ma’aji on Facebook.

Participants at the Nnewi Ofala festival and observers more broadly consider Moghalu’s new title of “Ifek’ego Nnewi” profound in meaning, intriguing, and apt for this distinguished former United Nations diplomat, ex-central banker and new-generation politician. In a culture and society where hard work and other positive values were once respected but the new rich and politicians have largely abandoned core values, Moghalu’s title is seen by many as a straightforward rebuke of the worship of money and crass materialism. It fittingly comes from an accomplished global and national icon who inspires millions of young people across the country and possesses a strong record of integrity in public life.

“This recognition matters to me”, Dr. Moghalu said in a statement he released after his traditional title investiture. “My new title is a strong statement of my values in life. Integrity matters more than money. In public service for the world and for my country, I have never compromised it. It matters what we teach our society and how we are remembered”, he said.

“The recognition matters also because my traditional ruler showed appreciation for my humble contributions to my hometown community. This encourages me to remain on the track of service”.

Kingsley Moghalu is a global leader whose leadership has contributed to the progress of nations, societies and individual lives, and across domains ranging from economic policy, nation-building and international diplomacy to academia, politics and philanthropy.

He is currently serving on a high-level special assignment for the United Nations Development Programme as the UNDP Special Envoy on Post-Covid Development Finance for Africa. In this role, the former CBN Deputy Governor leads a project team based in New York, to assess the fiscal stress imposed on African governments and economies by the COVID-19 pandemic, possible sources of domestic and international resource mobilization for African countries and, following consultations with African leaders and policymakers, make recommendations to UNDP and African governments on how the latter can recover from the devastating economic impact of the COVID-19 pandemic.

As a Deputy Governor of the CBN, where he was headhunted by then Governor Sanusi Lamido Sanusi and appointed by President Umaru Yar’Adua in 2009, Moghalu successfully led the apex bank’s Financial System Stability (FSS) stability directorate, supervising a N17 trillion banking sector and extensive reforms that stabilized the sector after the global financial crisis of 2008. No Nigerian bank failed, and no bank depositor lost his or her money.

Following his stellar performance at the CBN, Kingsley Moghalu was appointed a Distinguished Professor of Practice in International Business and Public Policy at the Tufts University’s Fletcher School of Law and Diplomacy, one of the world’s elite graduate schools of international affairs, in Boston, USA. Although he no longer teaches full-time at the institution, he remains affiliated with it as a non-resident Senior Fellow in its Council on Emerging Market Enterprises.

While teaching at Tufts University, Professor Moghalu became strongly dissatisfied with the rising levels of poverty in Nigeria. He left the ivory tower and launched a bold quest for the Nigerian presidency, running for president in 2019 on a strong policy and visionary platform as the candidate of the Young Progressives Party (YPP).

But the charismatic and articulate Moghalu, who was broadly viewed as the most competent candidate in that election and drew support mainly from the youth and the middle class, seemed ahead of his time. He lost the election to the incumbent, President Muhammadu Buhari. In a national political space dominated by geo-ethnic calculations, it was also the widely held view in 2019 that it was still the turn of northern Nigeria to complete eight years in the presidency before it could rotate to another geopolitical zone.

With the development of the #EndSARS uprising by Nigerian youth and pressures for the next President of Nigeria to come from the Southeast region in the interest of equity and national stability, many observers believe that the former central banker and professor could be an ideal helmsman for Nigeria because he enjoys wide acceptability across the country, has the backing of many Nigerian youth, and shuns ethnic-based politics in favour of the politics of ideas and vision.

Although mostly known in the public eye for his 2019 presidential bid and his earlier time at the CBN, most of Moghalu’s professional life was actually spent even earlier in the international civil service of the United Nations. In a career of nearly 17 years in the world body, he led teams that built back failed and broken nations like Cambodia, Croatia and Rwanda, and served at duty stations in those countries as well as the UN headquarters in New York and in Geneva, Switzerland where he was a high-ranking official of the World Health Organization and the development finance fund The Global Fund to Fight AIDS, Tuberculosis and Malaria.

He resigned from the UN system at the end of 2008 and founded a global risk management and strategy consulting firm, Sogato Strategies S.A., in Geneva.
Kingsley Moghalu obtained his doctor of philosophy degree in international relations at the London School of Economics, a master’s at The Fletcher School at Tufts University, and a law degree from the University of Nigeria, Nsukka. He also studied risk management at the UK Institute of Risk Management in London, and received executive education in macroeconomics, financial management, and leading economic growth at Harvard University, Wharton, and the International Monetary Fund (IMF) Institute. He has written several books on political economy, public policy, and international law and politics, and is a distinguished international keynote speaker at global forums.

Despite his impressive global pedigree, Moghalu has remained connected to his local roots, a connection now strengthened by his recent elevation to the Nnewi Kingdom’s Body of Title Chiefs as the Ifek’ego Nnewi. In 2005, he established the Isaac Moghalu Foundation (IMoF) in memory of his late father Isaac Moghalu, a former Nigerian Foreign Service Officer. IMoF provides scholarships to indigent children and youth in Nnewi, supports the upgrade of educational infrastructure for schools in rural areas and urban slums, supports widows in the Nnewi community, and has provided skills training for women in Nassarawa and Kano States. The foundation is headed by Maryanne Moghalu, Kingsley’s wife of 26 years. They have four children.