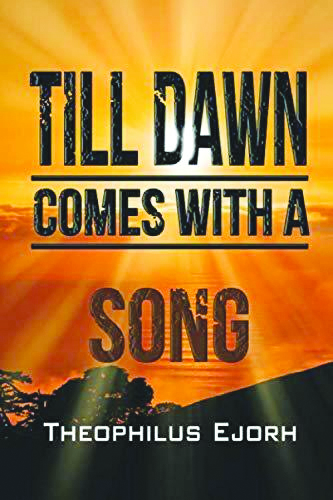 Theophilus Ejorh’s Till Dawn Comes with A Song is a political novel. I use the term political in a Sartrean sense. In his magisterial work, “What is Literature,” the French philosopher and literary critic Jean-Paul Sartre holds the idea that the aesthetic imperative of prose is to be committed, and by commitment, he means that the purpose of a good novel is to reveal the human condition to change it. So, a reader who wants to experience the charm and beauty of Till Dawn Comes with A Song must engage the novel as committed literature.

Set in the 1990s Niger Delta Nigeria, the book explores the concept of power and its use and abuse, and paints a portrait of humans in chains, bound by poverty, ecological injustice, and “environmental genocide.” In its negotiation of power and the explication of the socio-political and economic concerns, the novel distinguishes what we have classified as Political Power and Egbesu Power. Political Power is the power of authority, backed by the military might of the State. General Lulu Gee, the military head of state and his government are symbols of this power. Political Power is anti-people. It dehumanises, tortures, maims, rapes, and kills the people.

In contrast to Political Power, Egbesu Power is for the people. In the custom of the Ijaw people of the Niger Delta region, Egbesu is the god of warfare. It defends the people and attempts to correct the injustice against them. However, in the aesthetic context of the novel, Egbesu represents something more than the supernatural. It is the philosophy of the human will, the force that drives a people whose back is pressed to the wall and are left with no other remedial option but to fight back. Nothing else but just the willpower that compels Ebiye, the founder and editor-in-chief of The Stallion Magazine and Ndukari Peterside, energy reporter at The Stallion, to confront the mighty sword with the fragile force of the journalistic pen. Nothing else also but just the human will that motivates Olotu and his Niger Delta Red Army to bear arms against the superior force of General Gee’s army.

In negotiating these contesting powers, Ejorh reveals to the reader the horror that the people are up against: the inhuman treatment of the Niger Delta people, the ecological damage perpetrated by foreign oil companies such as Avatar Corporation PLC, and the deeply corrupt practises going on in the inner circle of Gee’s government such as drug trafficking and money laundering. Ejorh also presents to us a determined people who, against all odds, counter this rampant terror of authority and power with “journalism of commitment” that exposes “corruption and oppression, and all sorts of corporate misconduct and crimes against the land” and a determined Niger Delta Red Army that is blowing up flow stations in protest against the oil companies exploiting them. Gee is somewhat rattled by this show of people’s might, but he remains resolute and in full control. Eventually, he succeeds in assassinating Ebiye and Olotu after several unsuccessful attempts and sets Ndukari on the run. “Gov’ment power pass Egbesu power!” a talkative man working for the government mocks the people. “Egbesu power, powerless power.

General Gee is a vicious killer. He does not only kill for sport, but also as a ritual. The dead body of the fisherman pulled out of the Forcados River is missing the head. And Ebiye’s bullet-ridden body is pulled from the swampy field with no tongue, eyes, and genitals. It is this ritual motif that echoes in the anguish of the fisherman’s wife: “They killed him and took his head! The murderers killed my John for their wicked ritual.” African dictators are usually wired that way: Jean-Bédel Bokassa of the Central African Republic; Idi Amin Dada of Uganda; Teodoro Obiang Nguema Mbasogo of Equatorial Guinea; and Charles Taylor of Liberia. It is alleged that these tyrants fed on human body parts and innards to enhance their sexual powers and to add more years to their lives.

The book is a roman à clef, “novel with a key.” Ejorh makes it clear in the “Observations” page of the book that “large parts of the narrative are real events that occurred in Nigeria between the years 1984 and the 1990s,” and he weaves them into his engaging fictional narrative. Ejorh drops the key in the Afterword to encourage the reader to unlock the real identities of the characters and events he has disguised as fiction. And in being able to decode these figures and events, the reader can apprehend the novel in its full political force as committed prose and can see how past atrocities are being played out in our present condition.
Here are the facts that Ejorh blends with his fiction, as distilled from the narrative plot: Gee’s Decree Number 4, was crafted on 29 March 1984 by the repressive military government of General Muhammadu Buhari to target press freedom. The Stallion with The Lion that is born when the former was proscribed is Tell Magazine, Tempo, The News, and many other titles in Nigeria that were overly critical of military governments of General Ibrahim Babangida and General Abacha and they paid dearly for it: their Editors and staffers were jailed, harassed, and eventually driven underground. And they resorted to “guerrilla journalism.” Ejorh’s profile shows that he was a reporter for Vanguard newspaper and African Guardian Magazine. This also gives us a clue to how he has borrowed from his journalistic life and experience in his portrayal of Ndukari and Ebiye and the incidents around The Stallion.

And finally, the dastardly execution by firing squad of the five militants, alleged masterminds of the destruction of two flow stations owned by the American oil giant, Avatar, harks back to the murder by hanging of Ken Saro-Wiwa by General Abacha’s government on 10 November 1995 for leading a non-violent campaign against the degradation of land and water in Ogoniland.
The novel speaks of Nigeria’s past atrocities, but it also paints a vivid picture of her present predicaments. And that is the nature of roman à clef; it is often a thinly veiled criticism of a present condition. In this sense, the novel is very critical of the fact that Nigerians still wallow in squalor and abject poverty, the Niger Delta oil communities are still experiencing ecological injustice, and corruption continues to hold sway at both Federal and State governments. It is telling that the novel was published at this period of upheaval in Nigeria, notably the #EndSARS movement in which the Nigerian youth took to the streets to demand an end to police brutality, financial mismanagement, executive recklessness, inept leadership, and wanton corruption. Tellingly also, it is the same “infamous Decree 4” Buhari, now in civilian garb, that is presiding over this landscape of socio-political and economic malaise.

What this book is a timeless piece of committed literature, artistically engaged in finding solutions to the socio-political problems in Nigeria. However, how the novel ends may raise some critical questions that border on whether the novel, as a committed work of art, fulfils its full potential. Questions such as why is Ndukari, the only survivor of the three principal actors in the struggle, on the run, abandoning the struggle? And why is it a military coup d’état, something anti-democratic to a free society, rather than a people’s revolution that is conjured up to bring General Gee and his regime to a gruesome end?
The book is Ejorh’s first novel. Its ending raises the possibility of a sequel. The second novel, whenever it comes, can possibly install a democratic system in a free society. Perhaps, this is the reason Ejorh allows Ndukari to survive three assassination attempts and the bite of a poisonous snake, and to successfully escape the vagaries of life in Warri to the haven of peace and tranquillity of Lagos. Ndukari is on the run, but he runs to fight another day. Surely, not with a pen, but with arms. “It is not enough to defend … with a pen,” writes Sartre. “A day comes when the pen is forced to stop, and the writer must then take up arms.” In this singular act of Ndukari’s survival, the novel ends with a song that speaks of a new dawn of hope for Nigeria and for Africa!
––Dr Anny-Nzekwue is a Dublin-based scholar and literary critic.