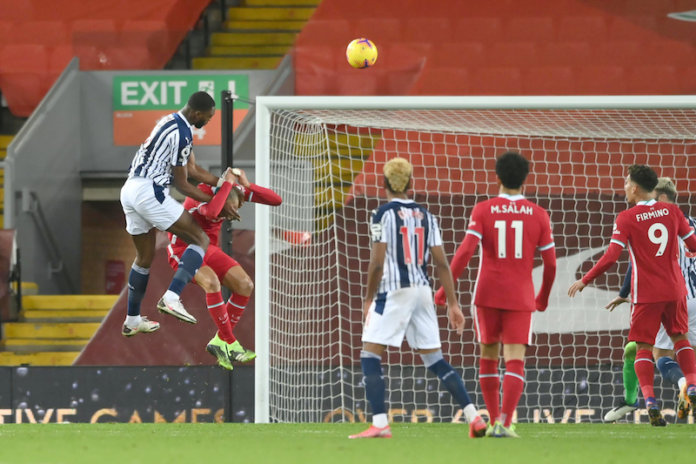 The Baggies centre back is gratified about how his game against the Reds went, where he broke his duck in the English top flight. Semi Ajayi is pleased to have scored his first English Premier League goal in West Bromwich Albion draw against Liverpool

Semi Ajayi’s effort ranks him behind only Liverpool’s Vigil van Dijk and Aaron Pierre as defenders who have scored the most headed goals in England’ top four tiers since the commencement of the 2018-2019 campaign.

Ajayi, who scored a late equaliser at Liverpool, has impressed the fans with his displays despite the club’s struggles this season. An elated Ajayi wrote on Instagram, “First Premier League goal! God is great.”

But his path to the top has been far from straightforward, taking him from Dartford and Arsenal to trials at Ajax.

“My journey has been a bit crazy,” the 27-year-old told BBC Sport.

“It just makes it even sweeter now that I’m finally in the biggest league.”

Ajayi played 44 times for the Baggies last season after joining from Rotherham in the summer of 2019, helping the club finish second in the Championship and earn promotion to the top flight.

He has made a further 14 appearances so far this campaign, scoring his first Premier League goal at Anfield having seen his deflected strike away at Manchester City a fortnight ago credited as a Ruben Dias own goal – his interventions winning the Baggies two valuable points.

It means the Nigerian international has now played in the top five divisions in England during his career, which also includes spells at Cardiff, AFC Wimbledon and Crewe.

Ajayi joined Charlton as a youth player in 2012 and spent a month on loan at Dartford of the National League, before he signed for Arsenal in 2013 under then boss Arsene Wenger.

“It was someone I’d only seen on TV up until that point,” Ajayi said of the Frenchman. “Just being able to pick his brains, learn from him, listen to him, study the information he was giving me in training was amazing. It brought my game on a lot.

“Training with the players is probably what brought me on even more. It showed me where you need to be at to play at the highest level. The quality you come up against every day in training was second to none.

“I’d probably say the person who had the biggest influence on me was Per Mertesacker. He took a lot of time out to teach me about the art of defending. He would just give me pointers here and there.”

He left Arsenal in 2015 having only featured for the under-23s, despite being named on the first-team bench on a number of occasions.

Ajayi says he had been “pushed down the pecking order” among the defenders and was told by Wenger that he could not guarantee first-team football.

“He said to me if I had an option of another team that would take me and provide that to me he wouldn’t stand in my way,” Ajayi said.

That led to him training at other clubs, including Dutch giants Ajax.

“You can see why they produce so many players when you enter their facilities and see how they do things,” he added. “They were interested. They wanted a young, athletic centre-back to be groomed for the first-team and I fitted their criteria, so they invited me for a trial.

“It went really well but I was looking for first-team football and the route that they wanted me to go would have been to initially play for the B team and then maybe work my way up into the first team.

“I just thought if I was going to leave home and then move all the way over there it would be for first team only.”