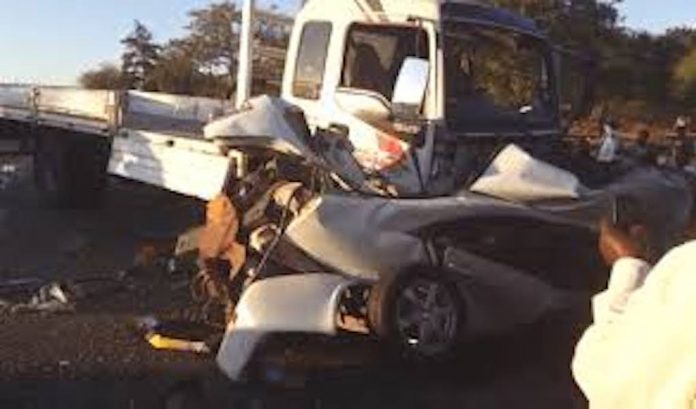 No fewer than 12 persons were feared dead yesterday following collision between a commercial bus and a Toyota Sienna on the Benin-Asaba Expressway.

The crash occurred near at Alifekede, a boundary community with Edo State near Agbor when the luxury bus ran over the Toyota Sienna car which was allegedly driving against traffic, eyewitness accounts said.

THISDAY learnt that road safety officials who moved swiftly to the scene pulled at least five lifeless bodies out of the wreckage of the vehicles.

Other passengers in the ill-fated vehicles were brought out unconscious and rushed to the hospital, where many more passengers were confirmed dead on arrival by medical officials.

Head of Operations of the Delta State Command of the Federal Road Safety Commission (FRSC), Mr. Bakare Fatai Adesina, who confirmed the active participation of corps-members in the rescue operation, however could not give further details as at the time of filing this report.

In another development, a nursing mother was crushed to death in Asaba metropolis, also yesterday, by a Toyota Corolla car along DLA Road in the Delta State capital.

The yet-to-be identified victim, with her two-month old baby, were walking on the pedestrian walkway while returning from where she apparently purchased a loaf of bread when the driver of the car, alleged to 28-year-old man with no identifiable occupation veered off the road, knocked the woman over.

The state police spokeswoman, Onome Onovwakpoyeya, who confirmed the incident, said that the victim died on the spot as she was smashed against a fence, while the driver is presently in police custody and his car impounded.