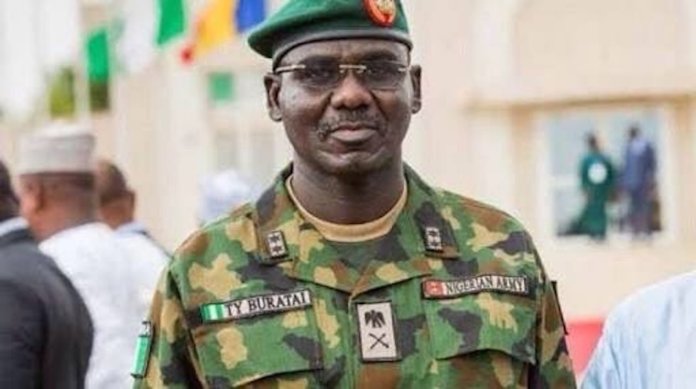 “A house divided upon itself – and upon that foundation do our enemies build their hopes of subduing us.”

But that war is not the purpose of this article; it is that immortal line and what it has got to do with the Nigerian security situation and what ought to be the ideal response of the Nigerian people, particularly the power brokers, and the military – emphasis on the soldiers that epitomise our struggle as Nigerians to live out our days as peacefully as we can.

It is hardly contestable that no mission, foreign or local, has claimed the lives of Nigerian soldiers more than the fight against Boko Haram since the terrorist group began its campaign in 2009. Brave Nigerian soldiers have continued to fight gallantly and, in many instances, pay the supreme price in ambushes and frontal attacks in the course of this war.
Nigerians may have been disappointed by a few lapses here and there – and justifiably so for obvious reasons, but this doesn’t detract from the truth that men in the frontline of this internal war, from Generals to the Private in the trenches, have never come across as wavering in their calling. In spite of all odds, they are ever ready to do battle when duty calls and the least the civilian population could do is to support them.

George Smith Patton Jr. was a general of the United States Army. He could just as well be paying homage to Nigerian soldiers when he said: “The soldier is the army. No army is better than its soldiers. The soldier is also a citizen. In fact, the highest obligation and privilege of citizenship is that of bearing arms for one’s country.” Patton was said to have epitomised the fighting soldier in World War II.

The job of the Borno State governor, Babagana Zulum, is an unenviable one. He is conducting the affairs of a state that is the epicentre of the security crisis that is afflicting Nigeria. In 2019, the governor reportedly commenced a multi-pronged strategy of his own, recruiting 10,000 hunters with “voodoo powers” to help the military rout the insurgents. But protracted insecurity has continued to ail his state’s economy and normal life. ‘Survival’ is the word that you find on the streets of Zulum’s state, not ‘growth’ or ‘development’, which his job should ordinarily be all about. And the man will have done a thankless job by the expiration of his tenure – two years from now, or six – because any accomplishments he may record will pale in comparison to the state remaining insecure.

So, I think we should cut the professor-governor some slack if he was ever ill at ease at the feeling of disappointment over the burdensome security challenges he is facing, notably from Boko Haram activities. The discerning must be concerned if he is not showing serious concern about what the lot of his people has become in the face of banditry and insurgency.
On Monday, December 21, the governor gave an expression to what has recently turned out to be the icing on the cake of his state’s security afflictions – kidnapping – and he found a vent in the military.

“If the army cannot protect people travelling within a distance of only 20 kilometres, then I cannot foresee the capacity of the army ending this insurgency any time soon.” He was reported to have said those words against the backdrop of the recent spike in the rate of abductions on the roads that connect his state to others. The governor reportedly expressed shock as to how such magnitude of attack could be perpetrated under the watch of the soldiers and police special squads deployed to protect the highway.
His words for the army got rather more unkind: “It is sad and mind-boggling how innocent commuters are being kidnapped and killed on this Maiduguri-Kano Road, especially the road linking Maiduguri and Damaturu… The Nigerian Army has failed us; they have failed in discharging their role of protecting the commuters… Instead, they are busy harassing and collecting money from innocent travellers, both police and soldiers. This is embarrassing. Just look at the number of vehicles that have been burnt here, yet we have our soldiers there watching and collecting money from commuters.”

The Defence Headquarters was quick to fault the tagging of gallant Nigerian Army personnel as extortioners at checkpoints in Borno State without joining issues with the governor. According to the Coordinator, Defence Media Operations, Major-General John Enenche, all personnel of the Armed Forces are patriotic and focused on their call of duty.

Now, there is a paradox, considering what the majority of our soldiers are doing in terms of what they daily sacrifice in living up to their oath of securing the country and protecting its integrity. A few bad eggs among these soldiers may indeed lend credence to Governor Zulum’s allegation, but the vast majority of others are brave men of honour.

Many of us may not have seen and probably will never know the true level of the sacrifice of our soldiers. But Ibrahim Gaidam, the immediate past governor of Yobe, a state that is unarguably as much terrorised as Zulum’s Borno, is not one of this ‘many’. He knew exactly what Nigerian soldiers were worth and he shared his view with the world. About six years ago when he still held sway as Yobe State helmsman, he said: “Despite the challenges posed by unconventional and asymmetric warfare, our gallant, dedicated, disciplined and loyal members of the armed forces did not lose courage at critical moments…They refused to give up and faced each difficulty with confidence.” He made that statement at an event organised to honour officers and men of the Nigerian Army, dead and alive, for their gallantry in fighting the Boko Haram terrorists in Yobe State. Governor Zulum can borrow a leave from this gentleman.

Nigerian soldiers are brave men who should be honored for their sacrifice, for risking their lives to protect our freedom. Many of them have had to sacrifice their lives so that the rest of us can live freely and prosperously. Many of them have families who they have no choice but to leave behind as they go to defend their country.

The soldiers fighting in that corridor (Borno) are some people’s sons, brothers and fathers and are daily exposed to danger. No one should compound their hardships with harsh words and ‘unstatesmanly’ allegations.
The soldiers need encouragement, empathy and support from the political leadership in that state. They also need the cooperation of the civilian populace. Unfortunately, the news we read daily is of betrayals from those they are daily dying to protect.

People of goodwill across the country should speak for them. They cannot be doing so much, even dying, losing limbs and blood and be getting attacks as their rewards from beneficiaries of their sacrifices. It is not fair.

I call on the elite of Borno and the North East in general to call a stakeholders meeting and agree on community-based strategies to assist the army to put an end to the 11-year-old war.
I call on them, from governor to civil servants, to meet and stop the bleeding of the nation. They should know that attacking our soldiers won’t end the war. What will end it is their cooperation. Our soldiers need their support and cooperation desperately.

According to the renowned English novelist, Eric Arthur Blair, known by his pen name, George Orwell, “We sleep peaceably in our beds at night only because rough men stand ready to do violence on our behalf.”

…Lawal, a public affairs analyst, sent this from Abuja.