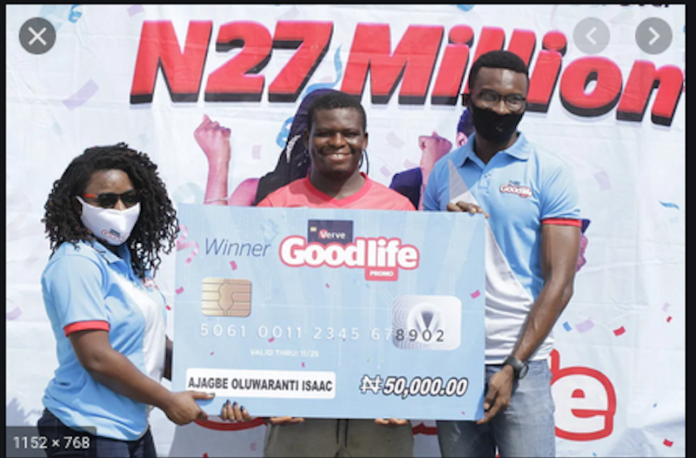 The grand prize winners took the total number of customers who won various categories of cash prizes and airtime in the three-month long promo to 2,552.

According to a statement, during the Verve Good Life Promo, over 2,500 lucky cardholders shared the over N27 million prize offering. The lucky cardholders emerged from across the six geo-political zones in the country.

Verve launched the Good Life promo in September 2020, to reward its cardholders with cash prizes and airtime. The Good Life Promo sought to enable Verve’s loyal cardholders to live the good life, whatever the ‘good life’ means to them.

Speaking at the prize presentation event, Group Head, Verve Marketing, Ikechukwu Ugwu, said the objective of the Verve Good Life Promo was to reward Verve cardholders for their loyalty and to give Nigerians a succour during these economically challenging times.

Ikechukwu said, “After the federal government lifted the lockdown across the country, we asked ourselves what we could do to support our customers and enable them live the good life. That was how the Verve Good Life Promo was borne.”

He added that Verve has continued to stay true to their commitment to reward Verve cardholders for their loyalty. “

Ikechukwu revealed that the promo drew in a wide range of winners, including artisans, mechanics, students and entrepreneurs and corporate professionals.

Adedamola Giwa, Country Manager, Verve, who presented the N1 million cash prize to one of the winners, said he was delighted that Verve stayed true to its words by rewarding loyal cardholders. He said one of the core values of Verve is to consistently reward its loyal and esteemed customers.

Olayiwola, who was overwhelmed with joy at winning N1 million, said she never expected to win the grand prize.

According to her, it seemed like a dream when Verve called to inform her that she had won.

Commenting further, Olayiwola said, she makes use of her Verve card often, “and this reward of N1 million could not have come at a better time than this.”

She urged other cardholders to constantly use their Verve cards to enjoy premium and efficient payment solutions.

The presentation ceremony had representatives from the Lagos State Lotteries Board (LSLB) Federal Competition and Consumer Protection Commission (FCCPC), The National Lottery Regulatory Commission (NLRC), Wema Bank and UBA, among others.