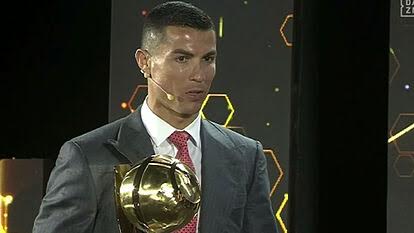 Portugal and Juventus star Cristiano Ronaldo has been named Player of the Century ahead of rival Lionel Messi at the 2020 Globe Soccer Awards.

Other players who lost out to Ronaldo were Brazilian legend Ronaldinho and Mohamed Salah of Liverpool and Egypt.

Ronaldo was voted to be the best player between 2001 and 2020, at a star studded event held in Dubai, after winning five Champions League titles, three Premier Leagues with Manchester United and two LaLiga trophies with Real Madrid, as well as the Nations League with Portugal.

“Thank you, to everyone who voted for me, to my family, to my mother and sisters,” Cristiano said.

“It is an exceptional achievement. It gives me the motivation to move forward.

“To be named the best is a great honour, I hope that this situation is over next year and that we can have more fun, thank you very much. I hope to still be able to play for more years.”

Elsewhere at the Globe Soccer Awards, Real Madrid won Club of the Century,

MARCA was the official newspaper of the Globe Soccer Awards for the 2020 edition, with finalists chosen by fans from all over the world, as well as a 25-member jury which included the likes of Eric Abidal, Antonio Conte and Deco.