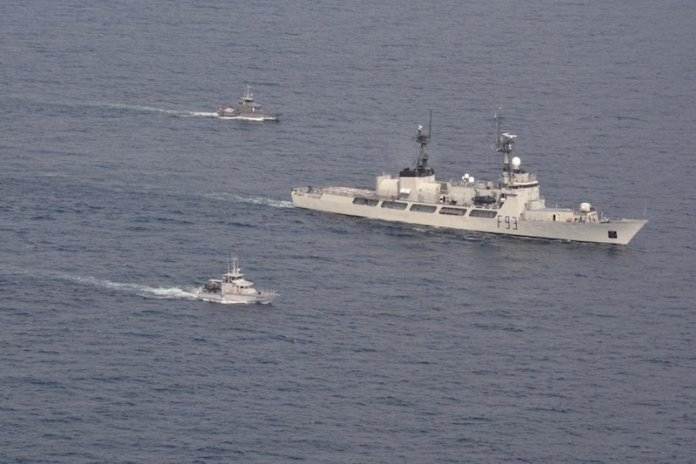 The recently held Exercise Still Waters was targeted at boosting the Nigerian Navy’s operational efficiency in combatting maritime illegalities. Chiemelie Ezeobi reports that the four-pronged exercise dealt with anti-piracy operation, protection of oil and gas facilities, search and rescue, fleet manoeuvres and communication, as well as vessel, board, search and seizures

Undoubtedly, the maritime environment is one of the mainstays of the economy. Shipping activities, exploitation and exploration of maritime resources as well as use of port facilities have consistently been the main source of the revenue that drives the nation’s budget and would be maintaining their significance into the distant future given their indispensablility for the nation’s economy.

The implication therefore is that the nation’s maritime environment is evidently strategic to the national survival and the prosperity of the citizens of any nation and Nigeria is not left out.

However, the immense potentials of the area are unfortunately undermined by potent threats in compounding degree and proportion. These threats manifest into diverse natures which are accompanied by devastating effects in plundering revenue loses, ecological damage, environmental degradation, erosion of confidence of stakeholders, malicious damage and sabotage of maritime infrastructure and their profound implication in the incubating role for the many security breaches on land.

To be clear, such vices such as piracy, illegal refinery, sea robbery, crude oil theft, sabotage attack on national oil and gas infrastructure both ashore and onshore, illegal unregulated and unreported fishing (IUUF) breed insecurity and economic deprivation in the maritime domain.

This is where the Nigerian Navy (NN) comes as it is constitutionally tasked with the protection of our maritime assets despite the many challenges that tries to hamper its fight against criminality in the nation’s waters.

It was to gauge and assess the navy’s operational efficiency and combat readiness that the Chief of Naval Staff Sea Inspection Exercise themed Exercise Still Waters was recently held.

For the exercise, it was a deployment of both ships and aerial power of the navy, showing the readiness to improve on its combat position within the limits of available resources and combat myriads of criminalities and illegalities on the nation’s maritime domain.

During the exercise, the navy boosted its operational capability and the combat readiness of its fleet to address maritime illegalities within the nation’s territorial water and its Gulf of Guinea’s corridor.

The flag-off took off at the Naval Dockyard Limited, Victoria Island, Lagos, with participation of agencies such as the Nigerian Customs Service (NCS), Nigerian Immigration Service (NIS), Nigerian Ports Authority (NPA), Economic and Financial Crimes Commission (EFCC) and the Ministry of Justice.

Flagging off the exercise, the Chief of the Naval Staff (CNS) Vice Admiral Ibok-Ete Ibas said the sea inspection was conceived to enhance the security of Nigeria’s maritime domain and sustain the desired level of competencies of the NN.

Ibas, who was represented by the Chief of Naval Safety and Standard, Rear Admiral Kamaldeen Lawal, thanked President Muhammadu Buhari for providing the necessary support, adding that putting the exercise together required significant logistics outlay.

On the objectives of the exercise, he said: “It is also aimed at assessing the operational state and readiness of the NN fleet, with focus on anti-piracy, anti-crude oil theft and anti-smuggling operations, among others.

“The NN has made significant progress in the fight against all forms of criminalities in our maritime environment. The sustenance of the gains made so far is critical to our national security, given the dynamic nature of the threats in the maritime domain.

“In the course of the operations, criminal hideouts would be raided and suspected criminals arrested ashore and at sea handed over to appropriate law enforcement agencies for further investigation and possible persecution.”

At sea, the ships conducted several exercises which include anti-piracy operations, protection of oil and gas facilities, fleet manoeuvres, communication drills, vessel board search and seizure, search and rescue amongst others.

At the end of the exercise, the CNS, who was again represented by Rear Admiral Lawal, said training exercises all over the world were conducted to correct weakness and sustain strength. While describing the exercise as rewarding, he noted that it impacted positively on the operational efficiency of naval personnel in several areas.

He said: “ The exercise was aimed at accessing the operational readiness and combat effectiveness of our fleet. As you may be aware, these goals are hinged on proper training and regular drills.

Training exercises all over the world are conducted to correct weakness and sustain strength.

In achieving these objectives, training exercises will always involve constant exercises that are physically challenging. This is in line with the maxim which says the more we sweat in peace time, the less we bleed in war.”

Adjudging the 2020 CNS annual sea inspection as successful and rewarding, he said,” Exercise Still Waters has impacted positively on the operational efficiency of personnel in several areas. The exercise also provided a platform to align our training objectives with our operational realities, towards curtailing various threats in our maritime domain at the Gulf of Guinea.

“Additionally, the exercise provided a test bench for the planning and execution of coordinated strike capabilities as well as an assessment of some of our planning assumptions. The exercise is generally adjudged successful”.

The CNS representative who disclosed that seven onboard landings with the Nigerian Navy helicopters were carried out, during the exercise, informed that throughout the duration of the exercise, there were no hitches,

This, he pointed out, was a clear indication of the navy’s combat readiness against illegalities on the nation’s territorial waters, adding that “the fact that throughout the exercise, no criminal elements were arrested shows that the exercise on its part has achieved its deterrence value. What that means is, whoever is a criminal on our waters is now aware that the Nigerian Navy is ready in all respect to combat all forms of criminality on our water”.

He was however quick to add that observations were noted during the exercise and that lessons learnt would be applied to boost the navy’s operations.

“This is important for the continued security of our maritime domain in the Gulf of Guinea which is key to our national curriculum maritime security and economic prosperity. Hence the conduct of these forms of maritime exercise will be sustained. This will guide us in assessing and revising some of our operational procedures and ensure relevance in our quest to conduct decisive maritime combat operations”, he stated.

While reiterating the navy’s resolve at ensuring safety on the nation’s maritime domain, the CNS said the navy will spare no effort in ensuring a safe and secured maritime environment.