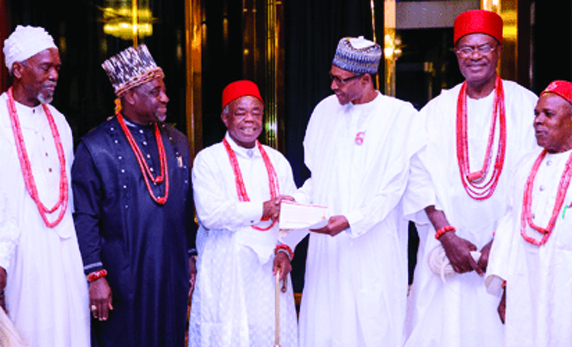 As Muhammadu Buhari’s tumultuous presidency nears its end, the ‘controversial’ issue of rotational presidency conceived to accommodate all geo-political regions and stabilise the polity takes centre stage. Louis Achi looks at the imperative of constitutionalising the template as being advanced by some interests lately

Historically, the political and structural disproportions of the Nigerian state have been at issue and spawned considerable regressive crises. This skewed scenario underpins the current socio-economic, national security and political quandary. It is within this context that threats to the stabilising informal template of rotational presidency must be weighed.

In a period of extremes, Third Republic Lagos Senator, Anthony Adefuye’s recent claim that the South East should perish the thought of seeking the 2023 presidency, because ex-President Olusegun Obasanjo is an Igbo man simply takes the cake for comic relief and creative Nollywoodisation of a serious matter.

Hear him: “I believe in 2023, the APC will zone the Presidential ticket to the South. When it comes to the South, then it will be narrowed down to the South West, because that is the only region that has not produced the President since 1999. It has always been the North and Igbo.
“Obasanjo is not a Yoruba man. He is an Igbo man from the South East. His father was from Anambra while his mother was a Yoruba woman. And that was why during his tenure, he completely ignored the South West. For example, throughout his eight years, he did nothing on the Lagos-Ibadan Expressway.

“But he did a lot for his people in the South East. He picked five ministers from there and even appointed the Governor of the Central Bank of Nigeria from Anambra, where his father came from.”
Although, Afenifere has disowned Adefuye’s position as “twisted and perverted logic” and insisting it was condemnable for Yoruba sons to disparage Obasanjo’s heritage for their personal interests, the plucky senator has had his say and perhaps inadvertently drawn attention to the critical issue of formalising the rotational presidency template.

It could be recalled that in August, elder statesman Mallam Mamman Daura, the influential nephew of President Muhammadu Buhari proclaimed there was no need for zoning the presidential ticket to any part of the country. He further held that Nigeria’s political space should be left open for the best candidate to emerge as president.

Seen as the most powerful personality in Buhari’s administration, Daura in an exclusive interview with the Hausa Service of the BBC said, the most qualified person from any part of the country should succeed his younger uncle.

His position, which basically attempts to skewer the informal North South rotational presidency template shored up suspicions that some elements from the North were perfecting plans to retain the presidency after Buhari’s second tenure lapses in 2003.

Significantly, under Buhari’s watch, the North has consolidated the region’s grip on both the military hierarchy and a wide swathe of strategic national positions to reinforce its flawed, survivalist calculations.

This scenario apparently forced Matthew Kukah, Bishop of Sokoto Catholic Diocese, to outright accuse President Buhari of nepotism. In his Christmas message on Friday, the bishop said there could have been a coup if a non-northern Muslim president does a fraction of what Buhari did.
He accused the president of institutionalising northern hegemony by “reducing others in public life to second-class status. This government owes the nation an explanation as to where it is headed as we seem to journey into darkness,” he said.

It would be noted that since the country returned to civil rule in 1999, political power had been rotating between the Northern and Southern regions of the country. But according to Daura, since Nigerians had tried the rotational presidency about three times already, it would be better to go for the most qualified candidate in 2023, irrespective of whether he comes from the North or South.

Not surprisingly, Daura’s position also spawned a storm – not just because of the message – but the sheer clout of the messenger. Mamman Daura is an alumnus of the Trinity College, Dublin. Comparable to Oxford and Cambridge, the Trinity College is a foremost nursery for grooming top-notch world leaders.

Besides, reactions from the major socio-political organisations and key stakeholders have taken different positions on Daura’s controversial statement. According to the Arewa Consultative Forum (ACF), the issue of rotational presidency is not a constitutional matter but only adopted by political parties for their own convenience.

The Yoruba socio-cultural group, Afenifere condemned without reservations, Daura’s position and other kindred’s stands, stating that Nigeria must continue with the power rotation between the North and the South. The apex Igbo socio-cultural organisation in Nigeria, Ohanaeze Ndigbo, has urged political parties in Nigeria to look the way of the Igbos and give them a chance in 2023.
Looking at the post-war big picture, the Igbo of the South East zone have apparently been left holding the short end of the nation’s political stick – walled-off from the office of the president. But they must seek a sophisticated engagement of the Nigerian state to claim the denied diadem of the presidency.

Zoning remains, for now, a pragmatic template to assure contending forces in the Nigerian polity, who interpreted the nullification of June 12 presidential election widely acclaimed to have been won by Chief MKO Abiola, as a Northern agenda rather than junta politics.