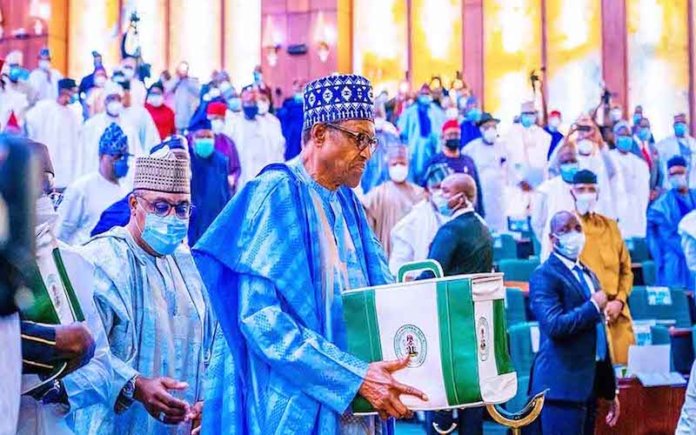 Last week, the National Assembly passed the 2021 Appropriation Bill presented to it by President Muhamnadu Buhari in October, making it the second budget to pass the January to December cycle since the Buhari administration reverted to the old practice. Udora Orizu writes

In a bid to maintain the January-December budget cycle, President Muhammadu Buhari had on Thursday, October 8, presented N13.8 trillion 2021 Appropriation Bill to the joint session of the National Assembly for consideration and approval. The 2021 budget estimate is N211 billion higher than the N10.594 trillion of the 2020 budget passed by the legislature in December 2019, before it was revised to N10.509 trillion against the backdrop of the Covid-19 pandemic.

The President, in the budget presentation, predicted that the country’s economy might lapse into a second recession in four years, with the projected negative Gross Domestic Product (GDP) growth in the third quarter of this year, but assured Nigerians that his government would do everything possible to get the country out of recession by 2021.

With the theme, “Budget of Economic Recovery and Resilience”, the 2021 appropriation is designed to further deliver on the goals of Economic Sustainability Plan. Buhari explained that the GDP growth declined by 6.1 per cent in the second quarter of 2020, adding that this ended the three-year trend of positive, but modest GDP growth recorded since the second quarter of 2017.

“I am glad to note that, through our collective efforts, our economy performed relatively better than that of many other developed and emerging economies. GDP growth is projected to be negative in the third quarter of this year. As such, our economy may lapse into the second recession in four years, with significant adverse consequences.

“However, we are working assiduously to ensure rapid recovery in 2021. We remain committed to implementing programmes to lift 100 million Nigerians out of poverty over the next 10 years,” he said.

The president explained that the exchange rate has been fixed at N379 per US dollar while the GDP growth is projected at three per cent and inflation closing at 11.95 per cent. He proposed an aggregate expenditure of N13.08 trillion, including N1.35 trillion spending by Government-Owned Enterprises and Grants and Aid funded expenditures of N354.85 billion.

The President noted that the 2021 budget deficit (inclusive of Government-Owned Enterprises and project-tied loans), is projected at N5.20 trillion, representing 3.64 per cent of the estimated GDP, slightly above the three per cent threshold set by the Fiscal Responsibility Act, 2007.

Also, the President explained that the budget deficit would be financed mainly by new borrowings totaling N4.28 trillion, N205.15 billion from privatisation proceeds and N709.69 billion in drawdowns on multilateral and bilateral loans secured for specific projects and programmes.

He stressed further that the sum of N484.49 billion provided for Statutory Transfers in the proposal represent an increase of N56.46 billion (or 13 per cent) over the revised 2020 provision.

In order to enhance national security and human capital development, he said a major part of the 2021 recurrent cost estimate was allocated to paying salaries and overheads in MDAs providing critical public services.

Buhari revealed that the budget of the Ministry of Education had been increased by 65 per cent to develop the education sector. The key capital spending allocations include Power – N198 billion (inclusive of N150 billion for the Power Sector Recovery Plan); Ministry of Works and Housing N404 billion; Ministry of Transportation -N256 billion; Defence – N121 billion; Agriculture and Rural Development -N110 billion.

The President stated further that personnel cost remained the largest single item of expenditure and that the seven months to July 31, 2020, it accounted for 34 per cent of total federal government spending, projected at 33 per cent of 2021 expenditure. He assured the lawmakers that his government remained committed to meeting its debt service obligations.

“A total of N2.183 trillion has been set aside to service domestic debts while N940.89 billion has been provided for foreign debt service. N220 billion is provided for transfers to the Sinking Fund to pay off maturing bonds issued to local contractors and creditors,” he said.

The 2021 budget also saw a 157 per cent increase in the capital allocation to the health sector, which is to enhance the capacity to deliver healthcare services through the procurement of equipment, vaccines and other facilities. Two centres of excellence, as well as one Accident and Emergency Centre, will be equipped in Federal Teaching Hospitals in each geopolitical zone.

The President, however, urged the National Assembly to expedite action on the passage of the budget.

Responding, President of the Senate, Dr. Ahmad Lawan and the Speaker, House of Representatives, Hon Femi Gbajabiamila, assured the president and the people that the budget would be passed by December.

After many weeks of budget defence sessions with various Ministries, Departments and Agencies (MDAs), the Senate and the House of Representatives, last week, passed the 2021 Appropriation Bill, increasing the budget size from N13.08 trillion presented to them by President Buhari to N13.588 trillion.

The passage of the 2021 budget followed consideration and adoption of harmonised reports separately submitted to them by their Committees on Appropriation.

The two chambers increased the 2021 budget by about N580 billion and pegged daily crude oil production at 1.86 million barrels per day, while oil benchmark price was fixed at $40 per barrel.

Presenting the budget report earlier, Chairman, Senate Committee on Appropriation, Senator Jibrin Barau, said the committee, while processing the 2021 Appropriation Bill, noted that “the impact of COVID-19 pandemic has negatively affected virtually every aspect of life, businesses, individuals and government especially, the revenue accruals to the government.

“There is remarkable increase in Nigeria’s oil price, which is hovering between $47 and $50 per barrel in the international market. This is above the benchmark price of $40 per barrel approved by the National Assembly. The discovery of under projection of the total revenue to the tune of N100billion.

“The need to enhance the structure of the budget to allow for the reflation of the economy in order to accelerate the process of taking out the economy from its current state of recession.

“The dire need for optimal allocation and judicious utilisation of the scarce resources available for economic recovery, diversification, enhancement of competitiveness and ensuring social inclusion.”

The committee recommended that “in view of the increasing global oil prices beyond the benchmark of $40, the executive may wish to submit a supplementary Appropriation Bill whenever it deems fit in order to fund critical areas that will further help to accelerate the movement of our economy out of its current state of recession.”

In a speech after the passage of the budget bill, Senate President, Dr. Ahmad Lawan, said the National Assembly would not accede to another request from the executive to extend the capital implementation of the 2020 budget.

He stated that the National Assembly’s approval granting extension for the implementation of the capital component of the 2020 budget last week should therefore be fully utilised by ministries, departments and agencies of government.

He added that the extension, lasting till March 31, 2021 alongside the implementation of the 2021 budget starting in January 2021, would guarantee sufficient injection of funds into the economy.

According to him, “For Nigerians, this budget that has been passed in the National Assembly today is to ensure that the economy is supported fully through public expenditure, because the economy of our country depends largely on public expenditure. The budget extension period for implementation of the 2020 budget, which we did last year, is to ensure that the funds that are available for 2020 are not lost.

“So, there will be two budgets running: funds from January 1, 2021, up to March 31, 2021; and then the implementation of the 2021 budget itself to start from January. That is absolute fight against the recession we are suffering from.

“With a projected three per cent growth in our Gross Domestic Product (GDP) in the 2021 budget, we believe that the recession, which Nigeria is in, will be over before the end of the first quarter.”

In the budget, the House approved N134 billion for the National Assembly as against N128 billion proposed by the president.

In his remarks after the passage of the budget, Gbajabiamila, said over the last two months, the House had been occupied primarily with efforts to complete work on the 2021 Appropriation Bill to ensure passage before the end of this year.

He noted that the January-to-December budget cycle was necessary to ensure the effective implementation of the country’s annual budgets to meet the nation’s development challenges.

Gbajabiamila stated that this standard would be maintained throughout the tenure of the present legislature, adding that the inadequacies of the country’s economy, healthcare system, internal security and justice architecture have eroded many people’s faith in the Nigerian project.

“Despite spirited government efforts, our economy is still overly reliant on the sale of crude oil. Vast swathes of potential in tourism and agriculture, manufacturing and technology, media and entertainment remain untapped due to insecurity, infrastructure deficit, policy and regulatory inconsistency.

“The risks we face are not abstract. In the aftermath of the #EndSARS protests, we saw it in the flames that engulfed our cities. We saw it two weeks ago in Zarbamari with the massacre of citizens farming for survival and most recently in the abduction of young boys seeking to improve their lives through education in Kankara.”

An Explanation for Budget Increase

Briefing journalists at the National Assembly complex in Abuja, last week, Kalu said, “What we passed was N13.58 trillion it’s an increase from what the President laid before us and the realities we found on ground made us to push it to what we finally approved today. The House has approved N4.125 trillion on capital expenditure; N5.641 trillion on recurrent expenditure as well as N3.324 trillion is for Debt Service, N5.641 trillion on debt services.

“The House has also recognised that it’s important to have statutory transfers and that is N496.528 billion has been approved for that. This is to show our commitment to Nigerians that this budget is here to stay. It is also important to know that we benchmarked the budget on $40 per barrel knowing full well that our major source of income revenue is oil and gas”.

According to him, with the passing of the budget, the National Assembly has been able to pass the buck to the executive by ensuring that the January–December budget cycle is maintained.

With the passage of the 2011 Appropriation Bill by the two chambers of the National Assembly, it is only hoped that the President would quickly give assent to the passed bill and ensure prompt and adequate release of funds to implement the projects captured in the budget.