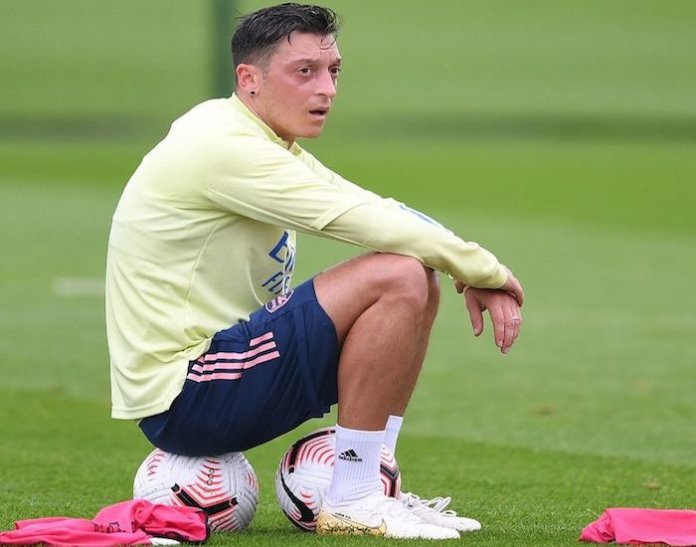 Mesut Ozil is closing in on a move to Fenerbahce after holding a secret meeting with the club’s bosses in London, according to reports.

The midfielder has not played since March after Mikel Arteta decided to leave him out of Arsenal’s Premier League and Europa League squads.

The Gunners have been desperate to shed his £350,000-per-week wages and a move could finally be on the cards. According to Bild, who cite reports in Turkey, the 32-year-old held talks with Fenerbahce chiefs in London.

The German website claim a move would only be possible in the summer, rather than January, and that the midfielder would take a wage cut of £200,000-per-week to sign with the Super Lig side.

However, earlier this month, one of Fenerbahce’s club congress members, Murat Zorlu, claimed they have a good chance of signing the former Germany international in January.

He told Sport Digitale: ‘A source, who’s very well connected to the club has told me that Mesut Ozil is likely to become a Fenerbahce player during the next transfer window.

Ozil is of Turkish heritage, is well acquainted with Turkish president Recep Tayyip Erdogan, who was the best man at his wedding, and regularly visits the country.

The midfielder has previously spoken about his Arsenal exile in the midst of the club’s deteriorating form. The Gunners are 15th in the table and just four points clear of the relegation zone. They were also dumped out of the Carabao Cup with a 4-1 defeat by Manchester City on Tuesday.

Following that result, the former Ozil took part in a Q&A on Twitter.

Asked whether he is happy at Arsenal right now, he said: ‘It’s a very difficult time for everyone around the club – not just for me,’ he responded.

‘The situation is frustrating for everyone. Of course I would wish I could help the team especially right now, but as long as I don’t get the chance I just hope that we get better results very soon again.’

The midfielder’s agent, Erkut Sogut, has long insisted Ozil has no intention of leaving the club before his contract expires next summer.

Speaking to Tuttomercatoweb, when asked whether Ozil will leave in January, Sogut said: ‘Even one day is a long time in football, you never know. Of course, there are many clubs interested in him.

‘This has never changed but his willingness to honour his contract and play hasn’t changed either.

‘He’s a man of his word, loyal, and loyalty is hard to find in these times.’