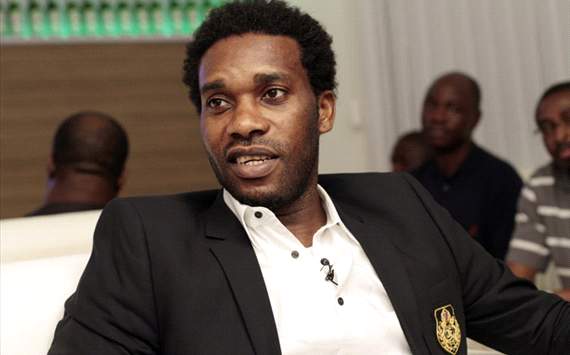 That same sentiment was echoed by his World Cup teammate, Mutiu Adepoju who says there is too much pressure on the national team’s young players.

The 47-year-old Okocha, who retired in 2008, admitted to Lagos radio station Brila FM that the lack of creative midfielders is holding the current Super Eagles squad back.

“We should support these players and let them flourish on their own instead of unfairly putting them under pressure by calling them the next this or that,” said Okocha.

“I think people need to stop the obsession with that new Jay-Jay label because it’s unfair on these young players.”

In recent years Under-17 World Cup winners Rabiu Ibrahim and Kelechi Nwakali, Joel Obi and Alex Iwobi have all been hailed as a successor to Okocha in the Nigerian midfield that many believe lacks flair and creative verve.

Okocha made his debut for Nigeria against the Ivory Coast in 1993, before going onto win Olympic gold three years later and then become the first Nigerian to play in three World Cups in 1994, 1998 and 2002.

The former Bolton, Hull City and PSG midfielder is regarded as one of the finest players to have emerged from the West African nation and his talent saw him win twice crowned the BBC African Footballer of the Year

Midfielder Adepoju, who also participated in three World Cups with the Super Eagles, agreed that the local media and fans are guilty of putting too much pressure and spotlight on the young players.

“I believe calling young players in the youth teams as next Messi or Jay-Jay Okocha is unfair and unnecessary,” Adepoju who turned 50 on Tuesday told BBC Sport Africa.

“Indulging in this comparison is setting them up for failure because the weight of expectations will definitely affect these players mentally.

“It’s the main reason some players refused to work hard and be themselves because they easily get carried away by what the press was writing about them.”

He says that he has seen plenty of younger talent that has not made the step-up to senior level over the last ten years.

“We’ve seen in the past decade that we have talented players all over the field who can make our team tick again,” he explained.

“Nigeria continue to dominate the youth events and there are positive signs of better days to come.

“We just need to nurture these players properly and do away with the hype and noise.

“But if these players are allowed to play their own game and shine, they can be a success both at club and national team level.

“Victor Agali was widely regarded as the next Rashidi Yekini, but he fought extra hard to establish himself and sometimes people expected too much from him.

“He is an example of someone who saw the burden of that label yet worked hard to establish his own name.”

Adepoju holds a UEFA Pro license and has Spanish nationality after years spent playing in Spain, for the likes of Real Madrid, Real Sociedad and Salamanca.

He played alongside Okocha as Nigeria won the 1994 Nations Cup and his career also took him to Turkey, Saudi Arabia and Cyprus after making over 50 appearances for the Super Eagles.

A 1989 Under-20 World Cup star, Adepoju insists Nigeria has shown promises in global youth tournaments that it can produce midfielders who can bring success back to the national side.