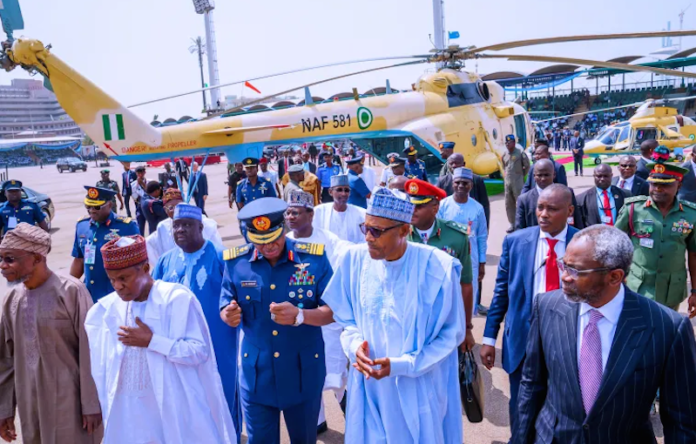 President Muhammadu Buhari Thursday in Abuja said his administration would “remain unyielding in confronting the Boko Haram insurgency as well as other forms of criminality that have bedevilled our country.”

The president spoke at the induction and commissioning ceremony on the newly acquired NAF MI-171E helicopter and two reactivated alpha jets and one L39ZA aircraft, all belonging to the Nigerian Air Force.

Presidential spokesman, Malam Garba Shehu, in a statement, quoted Buhari as saying, “On our part, we will continue to support you in any way we can to help you become more effective in the execution of your mandate for the safety and security of our country.”

He also said the president noted that his administration had boosted the capacity of the Nigerian Air Force by 23 brand new aircraft in recent times with more still on the way.

Buhari said: “Today’s induction brings to 23 the number of brand new aircraft that have been added to the inventory of the Nigerian Air Force since we came on board in 2015 and is a clear reflection of our unflinching commitment to ensuring the security of Nigeria and Nigerians.

“These 23 new aircraft are aside the 15 additional aircraft, including 12 Super Tucano aircraft from the United States of America and 3 JF-17 Thunder Multi-Role Fighter aircraft from Pakistan that have been procured and will soon be delivered.”

Shehu said Buhari also noted that the gestures were besides other supports towards reactivating over 25 erstwhile unserviceable aircraft “significantly boosting the capacity of the Service to deliver robust air power in support of our counter terrorism and counter insurgency efforts.”

He also said Buhari disclosed that he had also released two Agusta 101 helicopters from the presidential air fleet to the Nigerian Air Force to improve its tactical lift capability.

The statement added that the Minister of Defence, Major General Bashir Salihi Magashi (rtd.), in his own remarks, said, “President Buhari, since assumption of office, prioritised national security at the top of his agenda and part of it is reequipping the Armed Forces to enhance their operational effectiveness.”

It also said the Chief of Air Staff, Air Marshal Sadique Abubakar, assured the president of the “unalloyed loyalty of the Nigerian Air Force and readiness to relentlessly work for the protection of our country.”