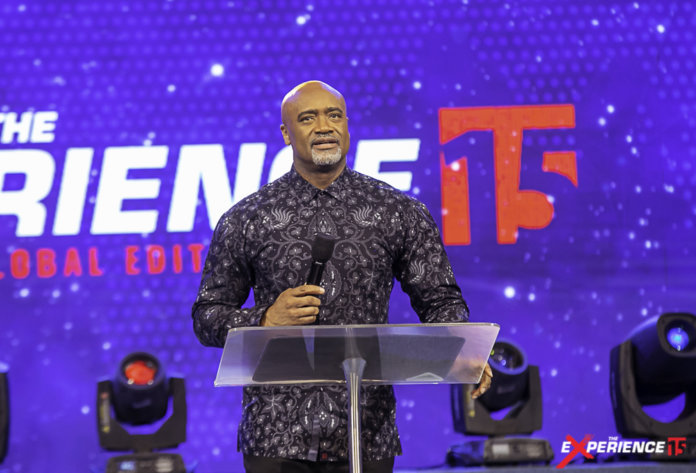 Paul Adeolu Adefarasin is a globally renowned preacher, an astute teacher, an impeccably eloquent public speaker, and a vocal agent of social change in the society. Pastor Paul, as he is fondly called, is a man whose story is one that embodies the grace of God on a man, and his church, House on the Rock, which started humbly from his mother’s living room with seven members, and has now grown widely across Nigeria, Africa, Europe, North America and other parts of the world, with about 50 churches globally. He is married to Ifeanyi Adefarasin, who is also a co-pastor at House on the Rock.

The Vision and Birth of the Experience

As with the vision of House on the Rock as a church, Paul Adefarasin had another vision which he called ‘The Experience’. This vision has seen an exponential growth over the years. But what is The Experience? Simply put, ‘The Experience’ is an all-night gospel music concert hosted by the metropolitan of all House on the Rock Church, Paul Adefarasin. The concert was born out of a genuine desire to spread the gospel globally in a way that had never been done before anywhere else in this world, while at the same time, breaking the barriers of distance, language, race, economic class or denominational nomenclature. This God-inspired vision provides a platform where all can raise their hearts, hands and voices together as one in unfettered praise to the Almighty.

The very first edition of The Experience took place on the 1st of December 2006, and this first edition garnered a whooping attendance of about 70,000 people and it is safe to say that it has since grown exponentially to over 700,000 participants attending physically at the regular Tafawa Balewa Square venue, with millions watching online and on cable TV. As a result, The Experience has been labeled the largest gospel concert in the world, which is now at its 15th edition-The Experience 15 Global Edition.

The Experience has since inception been one of the most talked about events globally, and for very good reasons, from the spiritual empowerment it delivers to the top notch musical groove to the participants, the volunteers, the organizers, the resources, the artistes (both local and international), the guests and even the logistics involved are all worthy topic for discussion. As a matter of fact, The Experience was once dubbed “a logistical nightmare” by many, because it is obviously a no easy feat considering the many moving parts that are always concurrently running. Yet Adefarasin and his teams have been able to deliver The Experience for many years seamlessly. So what’s not to talk about?

Now, the global music concert is in its 15th edition, and due to the COVID-19 pandemic, ‘The Experience 15’ was held 100 percent as a virtual event recently, with millions of people connecting from across all continents of the world, tuning in from the comfort of their homes to worship and praise God from dusk to dawn.

The Men and Women behind the Scenes

The Experience would probably have only been a vision in the mind of Paul Adefarasin, if he didn’t have an impregnable army of men and women who were and are still willing to make themselves available to bring a vision into an actionable, tangible and impactful reality. A workforce you can call it. These men and women year in year out, work tirelessly to make the experience what it is. They give their time, energy, resources, intellect, expertise, social network and even certain properties (like cars, hotels, residences and more) to make it all happen. While some of these people are paid staff of the House on the Rock Church, a dazzling majority are principally volunteer workers and church members, giving their all with absolutely no monetary compensation.

Sometimes you see these people, but more often than not, you don’t. However, their immeasurable contributions make The Experience an event that is never forgotten and one that has set a template for even secular concerts in Africa and across the world. One of our correspondents spoke with one of such people, Rex Adehor who is a worker at the House on the Rock, and this is what he had to say.

“Personally it’s been a great journey for me. The work, the efforts, the late nights, the constant learning and having to see The Experience not just put a smile on people’s face but to see them glorify God in one voice. Trust me it’s a tremendous work behind the scene, there’s some kind of dedication and this openness of heart when you hear the drum roll for Experience, like I said there’s a lot of work going on behind the scene and it is phenomenal because this is the first of the kind in the history of The Experience and The world,” Adehor, who is a worker in the media department of the church, stated.

“This year’s experience really taught me a lot. God doesn’t need a crowd to do mighty things- He just needs a few people, and I believe anyone can be among those few…literally anyone. I’m just grateful to be among the few. From the spiritual to the physical, TE15 planning started as soon as TE14 was done. I personally thank God for Pastor Paul who consistently insists on excellence, because without the head, the body has no direction, and the result is shown, all Glory to God” Adehor added.