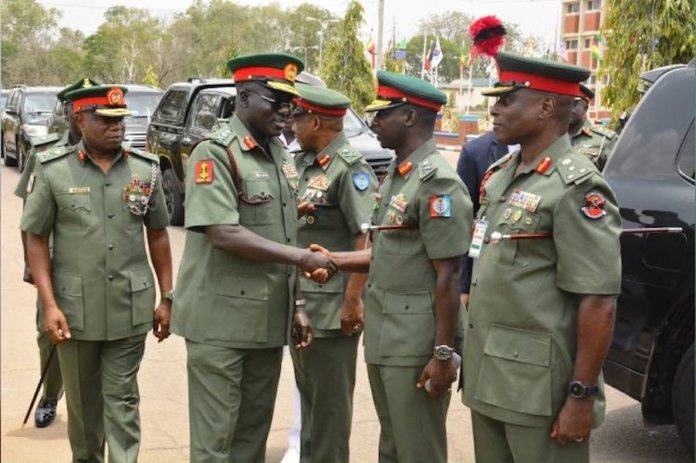 With the worries expressed last week by the Chief Justice of Nigeria, Justice Ibrahim Tanko Muhammad, that some persons occupying privileged positions of authority were flagrantly disobeying court orders, the Nigerian Army readily comes to mind for the non-compliance with the judgments ordering the reinstatement of six senior officers whose careers it arbitrarily truncated in 2016, Davidson Iriekpen writes

The occasion was the ceremony to mark the commencement of the Supreme Court’s new 2020/2021 legal year and conferment of the rank of Senior Advocates of Nigeria on 72 lawyers, but it was a perfect opportunity for the Chief Justice of Nigeria (CJN), Justice Ibrahim Tanko Muhammad, to reiterate one of the biggest challenges facing the judiciary in the country.

To Justice Muhammad, one of those challenges is the flagrant disobedience of court orders by some persons occupying some privileged position, thus tarnishing the image and integrity of the courts.

The CJN who did not mince words, expressed worry that some persons occupying privileged positions of authority flagrantly disobeyed court orders and boasting about it. He warned that such action would now be met with severe consequences.

Justice Muhammad, who was represented at the occasion by Justice Olabode Rhodes-Vivour, advised people in power and those highly connected who take pleasure in disobeying court orders not only to desist as such acts would no longer be condoned, but added that they would help to make people lose confidence in the judiciary.

Though he warned that the culprits would be punished, but the message could be the lack of confidence people could have in the judiciary, which could be damaging to the country.

He said, “Obedience of lawful court orders has no alternative in any sane society. A threat to this is simply a call for anarchy. I believe strongly that there is no right-thinking citizen of this country who will tread that path of infamy. We must respect and duly observe all the tenets of an enduring democracy.

“Nigeria is not a lawless society and no one, irrespective of his or her status, should turn it into one. Most times, some persons who, by sheer stroke of providence, find themselves in the position of authority, flagrantly disobey lawful court orders, and even make a boast of it.

“Such acts will henceforth not be condoned. In fact, they will be met with severe consequences. We must extinguish such raging fire before it consumes us.”

To many Nigerians, one organisation that has conspicuously disobeyed court orders is the Nigerian Army. As at last count, there are six court judgments ordering it to reinstate the 38 senior officers whose careers it arbitrarily truncated in 2016, and which the army has refused to obeyed.

Investigation revealed that even the appeals it filed against the three judgments are constantly being deliberately stalled.

For those following the cases, it is over four years now since the Nigerian Army compulsorily retired 38 of its senior officers without justification. At the point when the action was taken, Nigerians were informed by its former spokesman, Brig. Gen SK Usman, that the officers were compulsorily retired on “disciplinary grounds, serious offences”.

Even the then Minister of Defence, Brig. Gen Mansur Dan-Alli (rtd) and Chief of Army Staff, Lt. Gen. Tukur Buratai, corroborated the statement of Usman, alleging further that due process and fair hearing were granted to all the 38 officers, implying that they were found guilty.

Specifically, Buratai said: “It took us painstaking procedure to ensure we did not pick innocent ones. We started with one inquiry from One Division GOC to the other. After that, we subjected it to legal review. After the legal review, we forwarded our recommendations to higher authorities for consideration. So, it took us time; we have our own process also; our administrative process dovetailing into legal review and so on.”

However, it did not take long for Nigerians to know that none of the 38 officers was found guilty of any offence, and were never charged, tried or found guilty, let alone even appear before any court martial.

Several of the officers who felt the army breached its extant rules and regulations in carrying out the retirements took their grievances to courts to clear their names. This was after they appealed to President Muhammadu Buhari for his intervention and reinstatement, but no response from the presidency or the army.

Six of the officers have won their cases in court and have obtained judgments ordering their reinstatements into the Nigerian Army. The officers who have obtained judgments against the Army are: Maj Gen Ijioma, Cols Hassan and Suleiman as well as Lt Cols Arigbe, Dazang and Mohammed. In the first half of this year alone, the army lost four of these cases. Added to these six, are another two officers who obtained National Assembly resolutions ordering their reinstatements representing some 20 per cent of the 38 officers.

Curiously, Buratai has refused to comply with both the court judgments and the resolutions. This has led to serious questions about the army’s desire to adhere to the rule of law.

For instance, in delivering his judgment on February 5, 2020 in Col M. A. Sulaiman v Nigerian Army and others, Justice Sanusi Kado corroborated the officers by stating that: “The compulsory retirement of the claimant (Col MA Sulaiman), is hereby declared null and void and of no effect whatsoever, as it was not done in line with the extant rules and regulations.” This has been the pattern in the cases that have been concluded.

In fact, in a society where the rule of law is supreme and strictly adhered to, the plethora of losses the Nigerian Army has suffered would have caused a judicial review of the retirements.

But this has not been the case as sources close to army authorities revealed that they have sworn “with their last blood” never to revisit the retirements while they remain at the helm of affairs of the army as that would be an admission that they lied against the 38 officers.

For many observers, there are several unanswered questions for Buratai. Firstly, what manner of due process was followed by the supposedly highly professional Nigerian Army that made the 38 senior officers to be retired without being found guilty of an offence? When and where, were all the officers charged, tried, and found guilty? Is there any evidence of the dates and times of the Court Martial sittings? Were the officers granted fair hearing? What are the status of the appeals of these officers to Mr. President? When will Buratai and the Nigerian Army comply with the rule of law and obey the court orders and judgments?

The above questions are significant because in 2016 the Army leadership under Buratai, reinstated Maj-Gen Ahmadu Mohammed after his appeal was reviewed by Mr. President.

Mohammed, it would be recalled was the General Officer Commanding (GOC) of 7 Division in 2014 when his troops mutinied and fired at his vehicle. The soldiers accused him of dereliction of duty and sending them to the battlefield with minimal logistic supports thereby leading to many deaths. The former GOC who is from Kano State, did not appeal his retirement within 30 days as stipulated by the conditions of service which according to Defence sources, was already a breach of the appeal process but this was ignored because the army headed by Buratai had an interest to ensure fairness and justice was served.

Mohmmmed instead, waited for the outcome of the 2015 general election as well as the removal of the previous service chiefs. As soon as President Buhari and Buratai came onboard, he was pronto, reinstated.

The issue is becoming embarrassing, as a judge in the Abuja Division of the National Industrial Court recently granted an order of mandamus for the Chief of Defence Staff, General Gabriel Olonishakin, to appear in court and produce evidence that the officers’ appeals were forwarded to the Presidency for review.

In Wing Commander Mshelia v. NAF & ANOR (2014) the Court of Appeal held: “The Armed Forces as a body, is supposed to be exemplary, in discipline, the world over. To violate the law and retire a member of that body in consequence is not an exhibition of discipline or exemplary conduct. To refuse to act in accordance with Section 178 of the Armed Forces Act 2004, and to continue to keep the appellant in suspense, is an abuse of office, calculated at denying the appellant the right to seek redress in a court of law, and that is why the Public Officers Protection was invoked. The law does not give reprieve in such a situation. No one will be allowed on the one hand, to act in breach of the law in a high-handed manner, and on the other hand, seek the protection of the law. The courts will not open their doors to such unlawful acts and dereliction of duty, a duty imposed by law… As earlier opined, the Public Officers Protection Act is meant to shield public officers and bodies, lawfully and conscientiously carrying out their duties, within the scope of their authority, from attack. It is not meant to be used as a sword by public officers acting without good faith and in flagrant disobedience of the law, to attack and maim others, more so when those others, are members of the same family, engaged in the service and defence of our country.”

Despite this “locus classicus” judgment of the Court of Appeal, the illegal and unjust retirements of the 38 senior military officers have continued under the Buratai-led army.

What perhaps is most shocking to many is the conspiracy of silence between the Defence and Army leaderships as well as the presidency on this matter. It appears they are indeed aware of the perverse injustice meted out to these young men and are either supportive of the actions of Buratai or are totally indifferent.

Every effort by THISDAY to confirm if the officers would ever be reinstated is often met with brick wall as the response is always “everything lies squarely with the Chief of Army Staff, General Buratai. It is only him that can answer that question. There is no other person.”

Sam and I: Tribute to Late Sam Nda-Isaiah