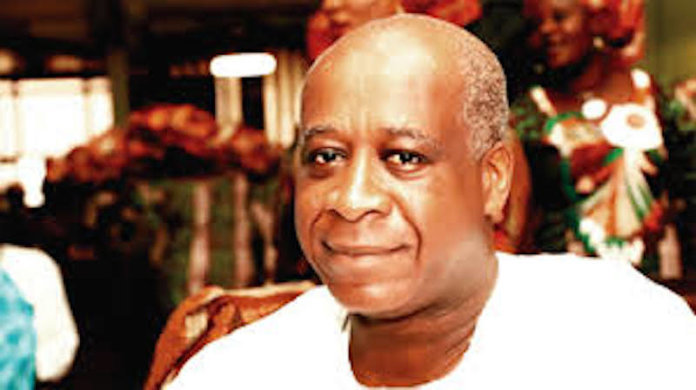 Aremo Segun Oniru has suffered a new brand of embarrassment and degradation. After losing battle after battle, the throne of his father, the allegiance of several cohorts, and landed properties supposed to formerly belong to his side of the Oniru family, the spell of doom on the Prince appears to have climbed to a new low.

From a viral video that is getting clicks up and down, the reputation of Aremo Segun Oniru, son of former Oniru, Oba Idowu Oniru, and a former Lagos State Commissioner, has been beaten to the ground. The trouncing took place while Aremo Segun was allegedly on his way to a closed-door cabinet meeting with the new Oniru, Oba Omogbolahan Lawal. Whether the incident merely delayed his trip or effectively terminated remains unknown. From the looks of the viral video, it is probably the latter.

In the video, Aremo Oniru was blocked by a number of folks who identified themselves as ‘Ebi’—family members. The supposed relatives (likely of the extended royal houses) rained abuses on the prince and called him a thief. Taking things up a notch, the video captured how one of the professing relatives went ahead to remove the cover of the licence plate of Aremo Oniru’s white Range Rover, revealing ‘AAO’— Aremo Adesegun Oniru? All the while, the prince remained aloof, only taking out his phone to make a call.

According to reports, the allegations of theft revolve around landed properties belonging to the Iru kingdom, properties that used to be under the control of Aremo Segun’s late father, Oba Idowu. This is why the allegations are being taken seriously by several people.

Since retiring as the commissioner of Lagos State Waterfront Infrastructure, the only other time Aremo Segun Oniru was publicly ridiculed was when he lost the Oniru throne to the current Oniru, Oba Gbolahan Lawal. While the loss is conventional, the bite of his defeat was the fact that until Oba Lawal was uncovered, Aremo Segun was the likeliest choice—and then he lost.

Folks have pointed out that, compared to his former opponent for the throne, Hakeem Ajasa, things are not going too well for Aremo Oniru. He has allegedly bitten the dust more times than any other grand character from the current Oniru royal lineage. Regardless, since the purported feud between him and Oba Gbolahan Lawal was settled, it is expected that the new Oniru is already on top of the current situation—that is, the one of Aremo Segun’s humiliation.
The allegation of stolen properties is another thing Oba Lawal is allegedly investigating.