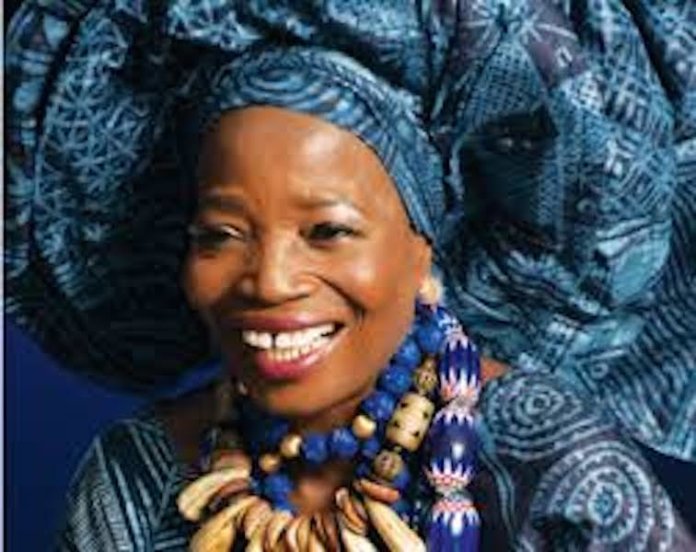 In her biography on Chief Nike Davies-Okundaye, a prolific development consultant reconstructs the artist’s life from her early beginnings to her recent more successful years. Okechukwu Uwaezuoke reports

“If Nike’s path in life had taken a much lighter and easier route, it is unlikely that she would have achieved as much as she has today. So many factors: poverty, differing cultural and belief systems; her courageous and rebellious nature, and a strong desire for a different type of life than what circumstances would have given helped to shape all the various stages in her life, and her development as an extraordinary power.” Perhaps, no other paragraph in Kofo Adeleke’s Bata Mi A Dun Ko Ko Ka (A Biography of Nike) sums up Nike Davies-Okundaye’s life’s story more succinctly as the foregoing, which concludes page 29.

Indeed, as Adeleke’s exhilarating book corroborates, not even the most severe, but needful, blows of Fate that Nike passed through, especially in her early childhood years, robbed her of her effervescence. She had cheerfully lived through it all, remaining as happy in poverty as in wealth. Her disarming charm, generosity and simplicity resounded throughout the 233-page book like a theme song.

As a thoughtful inclusion in the book, whose foreword was written by a former US Ambassador to Nigeria Dr Robin Renee Sanders, Adeleke offers a sketchy timeline – titled “Milestones” – which gives the reader a bird’s eye view of the celebrated artist’s life. The author – a development consultant who among other things has written extensively on environmental issues – has a lifelong passion for history, the historic built environment and local arts and crafts, which puts her in good stead to write about the woman, who is fondly referred to as “Mama Nike”.

In the book’s opening pages, the author first unfurls a scene that evokes a bustle of activities at Nike’s gallery in the Lekki area of Lagos in the reader’s mind’s eye. It is that of Nike readying her assistants for a familiar day-long and exhausting journey to her hometown Ogidi-Ijumu in Kogi State on an air-conditioned bus, generously painted with adire motifs and pictures of the artist and her four daughters. Then, with the account of the party’s arrival at their destination, her narrative beautifully dovetails into a crash course on the rustic community of Nike’s ancestors.

It is at this point that the reader comes to terms with the fact that not even being easily one of the most renowned personalities in the Nigerian art scene, made Nike’s fate any different from that of the biblical prophet without honour in his hometown. “Chief Reuben Okundaye, Nike’s husband, was highly instrumental in reintroducing Nike to her hometown,” Adeleke informs the reader, adding that it was he who “suggested to Nike that they ought to establish a presence in Ogidi”, after their marriage ceremonies in 1993.

The reader’s admiration for Nike soars, as the author narrates the initial conflicts the artist had to face and overcome in her childhood years. The innate sterling qualities of this delicate female child, who had lost her mother when she was only six years old and her grandmother the following year, glowed through these gloomy years, further eliciting awe in the mind of the reader. Her eventual upbringing by her great-grandmother, who was the head of all the craftswomen in Ogidi-Ijumu, taught her what she needed to learn about weaving textiles and making adire fabrics.

Nonetheless, circumstances still nudged Nike on towards her calling. For instance, the lack of funds to continue her education, rather than hinder her, became an impetus to live her passion. Running away from home at the age of 14 with a friend called Justina, to avoid being married off to a polygamous junior government minister, she had first joined Olosunta Travelling Theatre, one of the then-existing travelling theatre company, before breaking free to become independent. This move, according to the author, “was also her first step on her way to moving to Osogbo, which had already become a mecca for artistic expression.”
Besides, this move served as a catalyst that led to her association and marriage to the charismatic artist popularly known as “Twins Seven-Seven”, whose real names were Omoba Taiwo Olaniyi Oyewale-Toyeje Oyelale Osuntoki.

It was during her years in Osogbo that she learned indigo-dyeing and adire-making from the town’s informal art school, which was established by the late Ulli Beier and his wife, Georgina. Thanks to her artistic and marketing skills, she easily wormed her way into the close-knit circle of the local art community. Adeleke quotes her on page 57 of the book as saying: “My first gallery was in my bedroom and I called it – ‘Africa No. 1 Shop’”.

But her actual lucky break came in 1974, she was among the 10 artists picked from the continent to teach traditional weaving in the US. According to the author’s account, she had accompanied her husband Twins Seven-Seven on the trip, which happened to be her first outside Nigeria. Twins Seven-Seven was invited to be an instructor at the summer school to the Haystack Mountain School of Crafts in Maine. While in the US, she not only visited museums, she also learnt new skills, which included quilt-making.

The reader gets a close-up view of what Nike’s life among the other wives in the Twins Seven-Seven household was like and is not surprised when the free-spirited Nike broke free from this unpleasant family cluster. “Twins was a good teacher, a good artist,” Nike is quoted as saying in the book. “I worked in his studio, I was running a gallery under him and we had our bitter times, which we don’t tell people about, and the good times. When I left him, he said, ‘You’re coming back’ and I said ‘I’m not. Me that has to queue for three years to get a kiss from you, now I am alone with a man to myself why should I come back and queue up?’”

Of course, she did not come back. Nike, who not only holds a chieftaincy title from her home town (the Yeye Oba of Ogidi-Ijumu) but also holds another from Osogbo (the Yeye Tasase of Osogbo), blossomed spectacularly in the art scene and currently lectures at several universities in the US, Canada and the UK, even without a university education.

Fame stalked her from the period she became a favourite of White expatriate aficionados and when she mingled with celebrities, who included the late Afrobeat legend Fela Anikulapo-Kuti. The woman, who turned 69 on May 23, is not only celebrated for her art but also for her philanthropy, which expresses itself in her passion for empowering the less-privileged. Her four art centres – in Lagos, Osogbo, Abuja and her home town Ogidi, in which she had trained over 3 000 young Nigerians for free – offers free training in visual, musical and performing arts.

Her work as a textile artist has seen her give workshops in Europe and North America. Yet, she owes much of her current renown her paintings, which are influenced by her links with the informal Osogbo Art School. Indeed, her figurative paintings, which are inspired by Yoruba mythology, have been the toast of aficionados from 1968, when she held her first solo exhibition at the Goethe-Institut, then along Broad Street, Lagos. Since 2012, some of her works found their way into the collection of The Smithsonian Museum as well as The Gallery of African Art and The British Library, in London. This is besides the others, which are in other high-profile public collections worldwide as well as in private homes, including that of a former US vice-president, Walter Mondale.

Bata Mi A Dun Ko Ko Ka, which is generously illustrated with photographs, offers the reader an intimate glimpse into the life of this amiable lady of the contemporary Nigerian art scene. It is a delightful read, which every keen art lover would do well to acquire.
• A formal unveiling of this biography, graced by the Nobel laureate Wole Soyinka and the Lagos State Governor Babajide Sanwolu, was held yesterday, December 19, at the Choice International Building, along Ligali Ayorinde Street in Victoria Island, Lagos
PIX: Nike.jpg and Book Cover.jpg