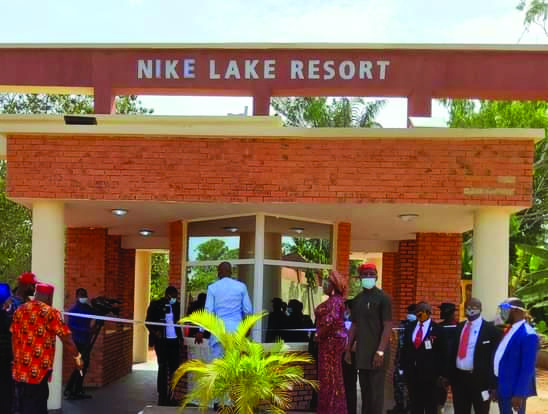 At the height of its glory, Nike Lake Resort was a touchstone of the hospitality business, boasting a reputation that went far beyond Enugu and playing host, literally, to the society’s who’s who in business, politics and entertainment.

But it has over the decades experienced its own cycle of boom and bust, living through times when securing a reservation at the facility was a challenge, and the embarrassing days of barely functional amenities when the rooms were rarely ever fully booked. The latter has however been the more dominant image lately, with the hotel built in 1988 literally knocked off its enviable perch by newer entrants which derisively refer to it as a brand merely living on past glory.

Successive attempts at restoring it to that former status have proved largely inadequate, or produced at best short-lived moments of revival. This time though, an extensive refit, coupled with the requisite political will, have both combined to give a fresh cause for optimism about the hotel’s future prospects. Its vastly refurbished exterior and interior now truly offer standard lodging options to families who typically return home for Christmas.

The massive upgrade has seen an overhaul of furniture and sanitary wares in 126 rooms (the resort has 200 rooms, and another 25 from its stand-alone villas designed for families seeking a short, but exclusively private stay.) In addition, rugs in the rooms which had become threadbare from long years of use have been replaced with floor tiles. Indeed, with regard to global standards, the new-look Nike Lake ticks several boxes: installation of CCTV cameras at strategic spots to further enhance security; replacement of outdated kitchen equipment with modern ones; water reticulation system for adequate water supply; renovation and refitting of the Omenala Bush Bar with artistic works that give the facility a more welcoming ambience.

This bar with its idyllic location on the cusp of Nike Lake (the about one thousand-metre natural lake from which the resort’s name was derived), serves essentially traditional cuisine such as achicha, isi-ewu, nkwobi, abacha, ugba, point-and-kill, and palm wine. Its various pagoda style huts with thatched roofs were designed to create a countryside feel. Diners here can have a bird’s-eye view of the lake and its jetty, from where a boat could be hired by the intrepid guest desirous of exploring the lake. It’s no surprise the resort’s board chair, Mrs Ugochi Madueke, cites the Omenala Bush Bar as a major selling point.

And the rehabilitation is merely still at the first phase. The impressive changes made so far is an indication that the second stage will easily usher the hotel to “the next level”, as Governor Ifeanyi Ugwuanyi had enjoined the board and management during his visit to formally launch upgraded facilities. Since the board’s inauguration last March, there has barely been any rest day for Madueke. “There was decay everywhere,” she said, noting that she inherited the building’s “carcass” almost in a literal sense. “It was obvious why a lot of the hotel’s customers left,” she added.

There were more stark revelations: the taps in the rooms – that is whenever they ran – yielded brownish water; the machines in the laundry were all broken down; none of the three cold rooms was functional. Equally worse, the condition of the kitchen left much to be desired. “If you entered that kitchen then and was served a meal afterwards, you’re unlikely to eat it no matter how appetizing it looked,” she said.

Nine months after that picture of desolation, a pleasant turnaround is very evident. From the 500-capacity convention centre to the main restaurant that seats over 200 diners with a view of the swimming pool to boot, and the lobby of the main bar where the smell of factory fresh upholstery hung mildly in the air, every section bore some traces of rejuvenation. The kitchen, laundry and cold rooms too all received a remarkable facelift. “We’re doing a lot of things simultaneously. The hotel had suffered leakages for a long time. So, we started from the roof because we could not do the rooms without fixing the roof. We also fixed the wings that were burnt sometime in 2018, which was of course before we came in,” she explained, thanking the governor for the swift release of the grant that made the retool the hotel has experienced possible.

One other point for which she is grateful to the governor is how he helped ensure that Nike Lake Resort is run professionally as a business, and not seen as some perks of office by government officials. “We have a wonderful governor in the state who insists that government officials must pay their bills when they use the hotel’s facilities. In fact, he always sets a good example by paying upfront for guests of the government,” she said.

The first phase of the turnaround rounded off just before December could not have come at a more auspicious time. Indeed, right from the remodeled gatehouse leading into the resort that sits on acres of land, Christmas is very much in the air. “We’re trying to recreate that which they would have travelled out to get. So, when you come in, you can have that festive feeling all around,” said Doris Nwoha, the hotel’s sales and marketing manager.

Besides slashing room rate considerably, the management has outlined a weeklong of activities to give both the individual guest and families a wholesome experience at Christmas. This includes special brunch, poolside barbecue, dance competitions, and a diverse range of children’s games.

But Madueke is actually looking beyond this Christmas. “I have a wonderful team that can take this hotel to the next level,” she said. She is hopeful that the resort will be a “strong competitor to major hotel brands like Hilton, Radisson, and become the best east of the Niger”.

It sounds audacious. However, anyone who knew the kind of acclaim Nike Lake Resort had enjoyed in the late 1980s through the 1990s would know that it surely has got the potential.
Ani, former editor of THISDAY – The Saturday Newspaper, and Saturday Telegraph, is a senior communications aide to the governor of Enugu State.