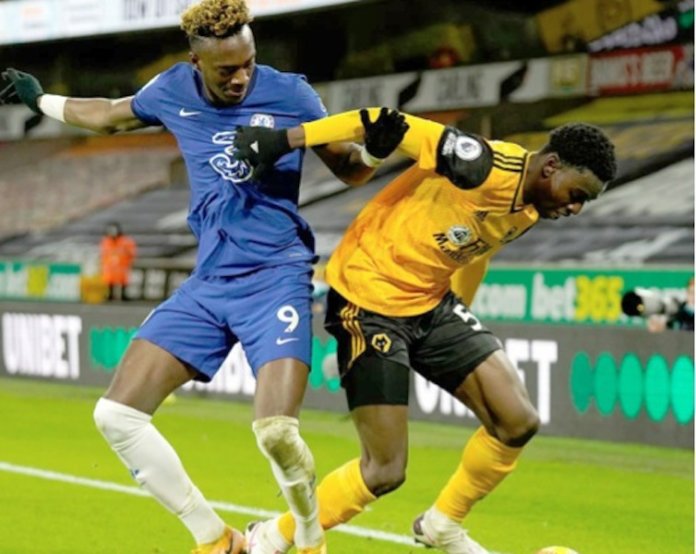 American-born Nigerian midfielder, Ebeguowen Owen Otasowie has expressed his delight at earning a breakthrough into the English Premier League. The 19-year-old came in as a substitute in Wolves 2-1 defeat of Chelsea

Nineteen-year-old, New York–born midfielder,Owen Otasowie made his Premier League debut for Wolves on Tuesday and helped the club come back to beat Chelsea, 2–1. Otasowie technically assisted on the equaliser, with his header to Daniel Podence being followed by a patient move and fabulous finish by the Portugal international.
Otasowie, who came on as a halftime substitute, won the aerial challenge and directed the ball Podence’s way before he bided his time, dodged defenders and beat Edouard Mendy with a powerful shot.

For Otasowie, who made his debut for the U.S. men’s national team last month as a substitute against Wales, the appearance came nearly a year to the day of his last first-team showing. His full debut for the club came December 12, 2019, against Besiktas as a substitute in the Europa League.

“The confidence he showed is fantastic, stepping out with the ball, showing how powerful he is,” Wolves captain Conor Coady said after the match. “He’s a great lad, you see him improving every day in training, which he does all the time now. He gets on with his business, gets on with trying to get better. It’s fantastic to see him out there. Over the years we’ve played quite a lot of young lads, and he’s the next one. He kept his shape. It’s not an easy game to come onto.”

Wolves won on a goal deep into stoppage time from Neto, spoiling the day for the more established U.S. star taking part in the match, Christian Pulisic. The Pennsylvania native was recovered from another minor injury and got the start, and he looked up for it early, taking on defenders and drawing a team-high five fouls.
Otasowie had two key passes on 30 touches in 45 minutes and could’ve scored had a pass not been sent behind him.

The teenager had four interceptions, two tackles, and a blocked shot in addition to his assist.
“The confidence he showed is fantastic, stepping out with the ball, showing how powerful he is,” Coady said on Wolves’ YouTube channel. “He gets on with his business, gets on with trying to get better. It’s fantastic to see him out there. Over the years we’ve played quite a lot of young lads and he’s the next one. He kept his shape, it’s not an easy game to come onto. …. I think he was getting annoyed with me because I kept going up to him to tell him to stay inside and he wants to go get the ball.”
Espirito Santo said Otawosie “did well,” branding the physical teen “a project we have to work on and try to develop.”

The Wolves boss was thrilled to see Wolves respond from a last-gasp loss to Aston Villa.
“We were always in the game,” said Espirito Santo, via the BBC. “We were well organised. In the second half we played really good football. … It’s a strange season. We miss our fans today. There are too many voices around the referee and technical staff. Too bad the fans are not here to celebrate with us.”
He was looking to a higher power when Pedro Neto bagged the stoppage time winner.

“It was needed,” Coady said. “You’re just praying for him to score, honestly, just a bit of magic to put it in the bottom corner like he did. There’s no better feeling than coming back from 1-0 down. The lads kept on going. Bit of a basketball match at the end which you don’t want to do but we dealt with it.”
Chelsea, which missed a chance to go level with Liverpool and Tottenham at the top of the table, will return to action Monday at home versus West Ham, while Otasowie will be hoping to see some more time in Wolves’ next match, Monday at Burnley.