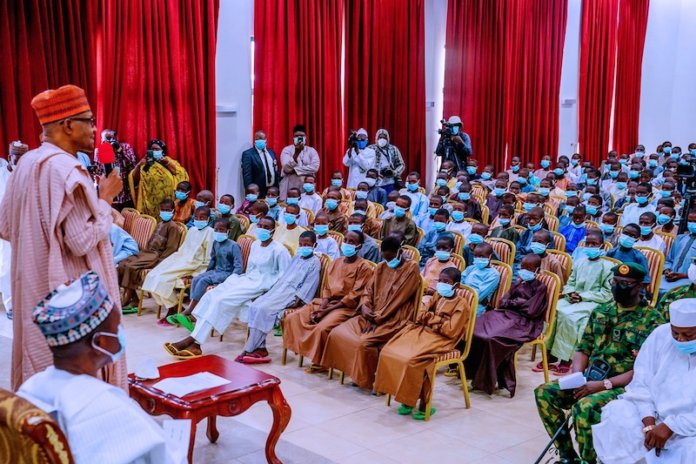 *Says security forces still have a lot to do

President Muhammadu Buhari Friday in Katsina advised the freed students of Government Science Secondary School, Kankara, to remain focused in the pursuit and acquisition of good education despite their ill-fated experience.
The president who tasked the pupils not to be distracted by the misfortune of their kidnapping, said the reward of knowledge acquisition is non-negotiable.

The president, according to a statement by presidential spokesman, Malam Garba Shehu, met with the 344 freed boys at the Banquet Hall of Katsina Government House, describing their plights as a test of character and determination to succeed in life.

He assured them that the federal government would upgrade the security structure in the country to ensure more safety.
Imploring the students to put their predicaments in the hands of their abductors behind them, Buhari insisted that there’s no alternative to education.

“My dear children, don’t be discouraged with what has happened,’’ he said
“Give your attention to acquiring knowledge and developing good character, and you will be distinguished in life.

“I know that you have been through a lot. The suffering you went through, please put it aside, and try to forget the painful experience. “There is no substitute to good education, so you must return to school and continue.

“If I wasn’t educated I will not be standing here today in front of you. I schooled in Katsina for nine years. I moved on to join the army, served as a governor, head of state, went to prison, came out and later joined politics. I contested presidential elections three times, and finally I was declared a winner in 2015.’’
He commended the Governor of Katsina State, Aminu Masari, for working tirelessly to ensure the kidnapped boys were freed unharmed.

He also expressed appreciation to all security agencies, traditional institutions and individuals who played key roles in the rescue efforts.
The statement added that the military and security agencies still had a lot to do to secure both the country, and its citizens.

“This is their job. They signed for it. Whether they like it or not, they will have to provide security for the country,” he said.
According to the statement, Masari in his remarks, said the security architecture in the country should be upgraded to ensure the safety of citizens, adding that the “kidnap of school children should never happen again.’’

The governor also said the release of the boys was the fallout of collaborations, negotiations and discussions.
He thanked the president for consistently supporting the process, creating time for regular updates and taking actions when needed.