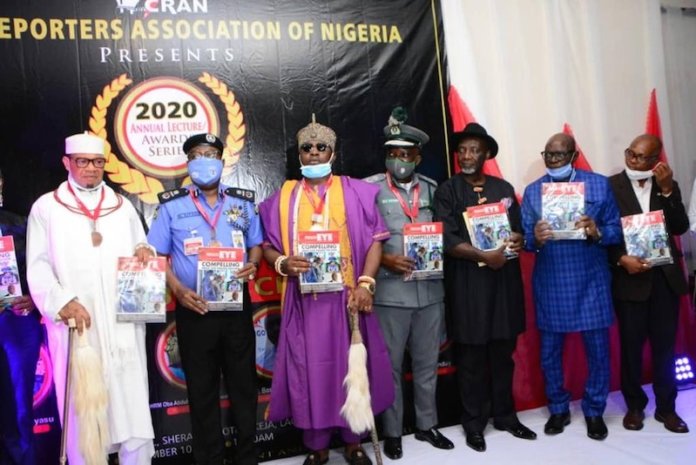 The Crime Reporters Association of Nigeria recently held the 29th edition of their annual lecture/award ceremony and it was targeted at proffering solutions to COVID-19 induced security challenges, Chiemelie Ezeobi reports

Recently at Sheraton Hotel and Towers, Ikeja, Lagos, top security practitioners, politicians, business executives, traditional rulers and many others from different walks of life graced the 29th edition of the annual lecture/award ceremony of the Crime Reporters Association of Nigeria (CRAN), which held on Thursday, December 10, 2020.

Prior to the event, the Chairman, CRAN Lecture/Award Organising Committee, Mr. Emmanuel Edom, while stating that the theme “MANAGING COVID-19 INDUCED SECURITY CHALLENGES” was germane, added that over the years, CRAN through its annual lecture has provided the platform for issues of national importance to be discussed and solutions proffered, which has invariably assisted the authorities in taking some policy decisions. This year, he opined the objectives would not be different and it certainly wasn’t.

The lecture was delivered by Mr. Dennis Amachree, a former chieftain of the Department of State Service (DSS) and currently a private security consultant, while the Chairman of the Day was Mr. Bone Chinye Efoziem, the MD of Strict Guards Security.

Like in previous events, this year’s event also featured the recognition and honouring of personalities who distinguished themselves in various sectors of the economy. Among them were personnel of the nation’s security agencies, private security companies, banks, agencies and business organisations.

In his speech, the National President, Mr. Odita Sunday-Udemaguna said “the association as you may know, has existed for about three decades now and it is expected to outlast its founders. May I now recognise an exceptional retired officer, CP Frank Odita, who urged journalists on crime beat to come together and form the body called CRAN today.

“CRAN is a group of journalists from various print, electronic and online media mandated by their organisation to cover crime, security, safety and allied events within the public and private security space. The crime beat which covers activities in the Police, Immigration Service, Customs, Civil Defence Corp, NDLEA, NAPTIP, Correctional Services, EFCC, DSS and other related agencies of government and the private security sector is a branch of the Nigerian Union of Journalists (NUJ).

“CRAN annual lecture/award is the only private sector initiated event where top security chiefs in all the law enforcement agencies are brought under one roof to share ideas. Over the years, our lectures have focused on relevant issues that called for expert discussion and recommendations arising from such, have gone a long way in helping security community in finding solutions to the perceived challenges.

“Besides the annual lecture, the event also is set aside by CRAN to honour dozens of Nigerians’ who have contributed in their modest ways to keep our lives and property safe and secure. Some of them in spite of their selfless commitment to a crime free society may never have had the opportunity of being celebrated by any group if not for the diligent effort of CRAN.

Among those we are to honour today are gallant policemen and women who have distinguished themselves in character and service.”

Lecture
In each series of the award, the lecture series have always stood out and this year was not different. In his lecture, former Assistant Director, Department of State Services (DSS) Mr Dennis Amachree said food scarcity looms if the continuous attacks by Boko Haram members are left unchecked.

Noting that the advent of COVID-19 had heightened insecurity across the land with an escalation in kidnapping, terrorism, highway robbery, banditry, militancy and piracy which had become common place in the country, he said; “The Zabamari massacre in Borno State underlines the state of insecurity in the country which has further disillusioned the citizenry about the safety of their lives and property. This particular massacre has the implications of an impending scarcity of food in the country. This is the plot of the terrorists and it is coming into fruition”.

Amachree further stated that Boko Haram sent out a propaganda, informing villagers that the lockdown was a ploy by government to stop them from following their faith, adding that “this narrative gave Boko Haram leverage to recruit more adherents from the poor and unemployed lot, that are readily available.

“Nigeria has been classified as the third most terrorised country in the world, according to the World Terrorism Index, which is not good as the most populous black nation in the world. This shows that our security and law enforcement agencies are overstretched in their bid to provide security to the citizenry”.

Amachree said the protracted conflict in the North-eastern part of the country continues to devastate the lives of civilians, resulting in a humanitarian crises affecting 7.7 million women, men and children.
He also noted that the separatist movement agitation against the Cameroonian government had also driven more than 300,000 refugees into Nigeria.

“The pandemic has exposed a range of new security challenges in the country. The notable aspect is the level of preparedness that government has made to square off the pandemic. The individual and family unit has been worst hit in trying to understand what COVID-19 is and how to handle it,” he added.

He further stated that the resultant effect of the lockdown caused by the pandemic traumatised citizens which made it easy for them to come to a break point.

“Especially when the Special Anti-Robbery Squad (SARS) unleashed mayhem on the youth population in the country which led to the EndSars movement.
“Bottled up anger and frustrations generated from the lockdown started the spontaneous protest across parts of the country. The government also quickly reacted by acceding to the foremost demands by scrapping the Special Anti Robbery Squad (SARS),” he said.

The director, however said that the lessons to note by the government was the need to change the parameters of profiling for criminals and the need for a people oriented policing.

“The need for a better trained anti-terrorist police unit like the Special Weapons and Tactics (SWAT) teams can not be overemphasised,” he said.

Also, AIG Ahmed Iliyasu, Zone 2 Police Command, Onikan, commended CRAN for hosting such an event that brought together security agencies across cadre to brainstorm to solving security issues posed by the pandemic.

He said: “This is a very serious and challenging issue because it is not only affecting Nigeria but it is affecting the whole world. This is the first type of gathering and it is unprecedented bringing together various security agencies to proceed solutions to tackling insecurity resulting from the pandemic. It has caused a lot of global economic problem with resulting negative fallouts across the globe such as recession, poverty among others.”

Meanwhile, Mr Sunday Odita, President, CRAN said who described Amachree as an icon in the security corridor whose pedigree as a former top brass in the nation’s secret service is second to none, he noted that “there is no doubt he has done justice to the topic. We hope the communique released at the end of our deliberation will certainly assist securities agencies in their roles as we continue to expect an end to the COVID-19 pandemic”.