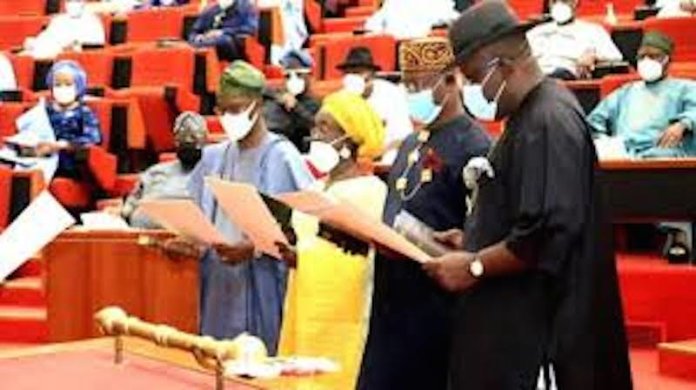 The immediate past Governor of Bayelsa State, Senator Seriake Dickson and newly sworn in Senator for Lagos East, Adetokunbo Abiru, have unfolded their legislative agenda for their constituents and Nigeria as a Nation.

This is as two other newly elected Denators, Cleopas Moses (PDP Bayelsa Central) and Professor Nora Ladi Dadu’ut (APC Plateau South), were sworn in along with Dickson and Abiru.

Speaking to journalists separately after taking their oaths of office and allegiance, Dickson and Abiru said collaboration with other federal lawmakers in finding lasting solutions to the problem of insecurity in the land is the number one item on their legislative agenda .

Specifically, Dickson who is now representing Bayelsa West, said since the problem of insecurity in the land arose from defective structure being run in the country, there was urgent need to address the defects.

“Nigeria as a Nation needs repair and rebuilding in terms of structure of governance which can only be done collaboratively.

“No one party can do it and no single arm of government can do it . The defects must be clinically identified and corrected in solving the myriad of problems bedeviling the nation, the topmost of which is insecurity.

“In recent past, it was Boko Haram alone, now it has multifaceted into Armed banditry, kidnapping, herders / farmers clashes etc, with attendant loss of innocent lives almost on daily basis.

“As a senator, I will surely join my other colleagues in tackling the ugly situation,” he said.

He added that series of empowerment programmes would also be rolled out for his constituents as a way of giving them responsible and responsive representation in the Senate.

Senator Abiru in his own mission statement, said he will bring to bear , his over three decades experience in the private sector to add value to his constituents and the Senate by way of development – driven legislations.

Accordimg to him, the needs of his constituents across the five local governments and 11 FCDAs in Lagos East Senatorial Districts, have been consciously documented during campaign rallies for practical responsive actions as senator representing them now.

However, no senator was sworn in for the two other senatorial districts where elections were conducted penultimate Saturday by the Independent National Electoral Commission (INEC).

While no candidate from the APC camp was declared as winner of the election by INEC for the Imo North senatorial seat, Dr Stephen Odey of the PDP declared as winner of the Cross River North senatorial seat and issued certificate of return by INEC, was prevented from taking oath of office on account of court order served on the Senate few minutes before the swearing in ceremony.