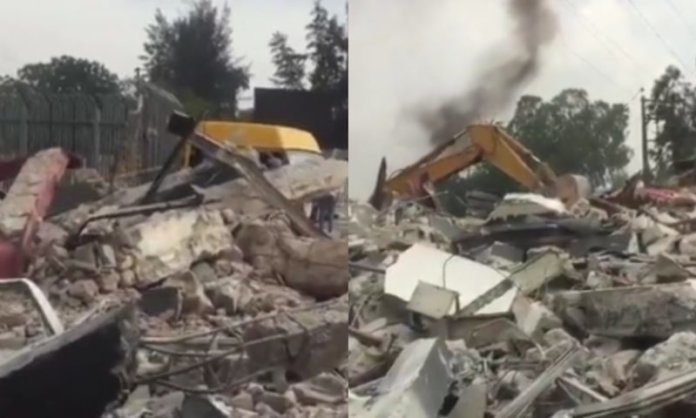 A property owner, Chief Reuben Olowookere, has accused the Lagos State Government of violating a court order in the demolition of the Maryland, Lagos outlet of Mr. Biggs.

According to Olowookere, who said he leased the land on which Mr. Biggs’s was built to Mobil Oil Nigeria Plc (now 11 Plc), added that a Lagos High Court, presided over by Justice Olaide Olayinka, had on June 1, 2018 granted an interlocutory injunction that the status quo to preserve the property from demolition be maintained pending the determination of the substantive suit.

Olowookere in a statement dated December 12, 2020, said his solicitors sent letters on November 20 and 26, 2020 to the Attorney General of Lagos State and the Permanent Secretary in the Ministry of Physical Planning respectively reminding the state government of the court order, which were ignored to execute the demolition.

“On May 21, 2018, I filed an action against the Lagos State Government to challenge the threatened demolition of Mr. Biggs and some other portions of my property in ID/1933LM/2018.

“The High Court of Lagos State (Olaide Olayinka J) upon the motion for the interlocutory injunction I filed granted an order for maintenance of status quo to preserve the property from demolition pending the determination of my suit. The order was made on June 1, 2018 and has not been set aside till today”, he said.

While he noted that the demolition carried out on December 7, 2020 by the Lagos State Government, which included the Mobil Petrol Station, Mr. Biggs eatery and a gatehouse and wall fence has generated some debate, be said being the owner of some portion of the property demolished, it is necessary for him to issue this statement.

Olowookere in the statement claimed to own a parcel of land measuring 2083.137 sq meters situated at 1A, Emmanuel Street, Maryland Lagos, adding that he leased a portion of it to Mobil Oil Nigeria Plc. (now called 11 Plc) for a period of 25 years commencing from March 1, 1997 to expire on February 28, 2022. “This is the portion of land occupied by Mr. Biggs”, he noted.

He, however, lamented that whilst the order to maintain status quo was still subsisting and the suit not yet determined, the Lagos State Government, on December 7, 2020 carried out the demolition, ignoring the letters written to the Honourable Attorney-General of Lagos State and the Permanent Secretary of the Lagos State Ministry of Physical Planning dated November 20 and 26, 2020 respectively by his solicitors.

“In view of the fact that the case is still sub judice, I will refrain from delving into the facts of the case but it is important to let the public know that the Lagos State Government violated a clear restraining order when it demolished my property.

“Our lawyers are pursuing the legal remedies available to us and as a responsible citizen, I remain committed to ensuring that justice is done through the due process of law”, the statement added.