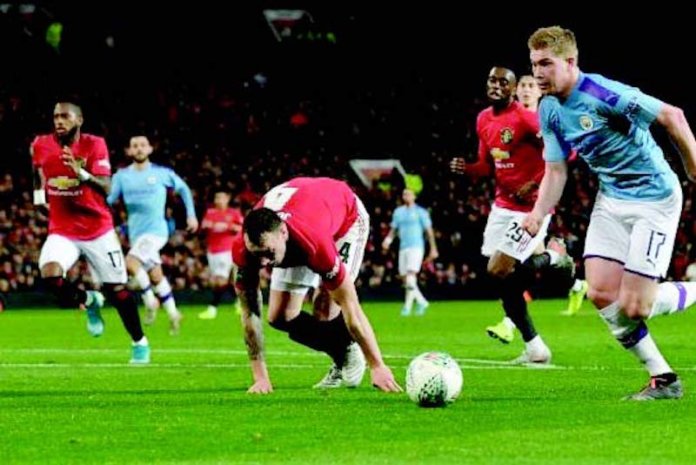 Both Manchester clubs endured disappointing starts to their respective campaigns, but have begun to climb the table in recent weeks and would stay in touch with the leading pack with victory in this match.

If anybody had told Manchester United fans at the beginning of 2020-21 that they would go into their first derby of the season, more than a quarter of the way into the campaign, sitting above Man City in the table then they would have no doubt taken that position.

However, all has not been well for either of these teams so far this term and, while Man City do now seem to be finding their feet, Man United continue to struggle with inconsistency and vastly differing home and away form.
Defeat to RB Leipzig in midweek condemned them to Europa League football again after Christmas, despite getting themselves into a position where they only needed one point from their final two games to qualify for the last 16 of the Champions League.

The 3-2 loss in Leipzig, which followed a 3-1 home defeat to Paris Saint-Germain a week earlier, was only made to look a little more respectable by two late goals for the Red Devils as they threatened another comeback away from home.
That has been a feature of their Premier League campaign so far, remarkably coming from behind to win all five of their top-flight away games so far this season – something which has never been done before in the competition.

Indeed, the Red Devils have now won a club-record nine successive away league games and are unbeaten on the road since January, and with questions again being asked of Ole Gunnar Solskjaer following their Champions League exit it is not too much of a stretch to suggest that it is only their away form which is keeping him in the job at the moment.
United’s record at Old Trafford is an entirely different story, with only a league-low 21 per cent of their points – four of 19 – coming on their own patch so far this season.

Three of those four points did come in their last such match as they narrowly edged past West Bromwich Albion, but they have not won back-to-back home league games since early July and will expect a much sterner test against Man City.
That said, Solskjaer has displayed an uncanny knack of pulling big results out of the bag when he needs them most, and he has won three of his five previous managerial meetings with Pep Guardiola too – the best win rate of any manager to have gone head to head with Guardiola four or more times.

Solskjaer could also justifiably point to the league table as evidence that Man United’s season is not going quite as badly as many have made out; victory today would temporarily lift them to within two points of leaders Tottenham Hotspur, having played the same number of games.

Such poor home form is an issue which would prevent a sustained title challenge unless fixed, though, and Man City will relish the chance to pour more misery on their neighbours in what has already been a difficult week on and off the pitch.
City have by no means enjoyed a faultless season themselves so far, though, and they make the short trip to Old Trafford sitting below their bitter rivals in the table.
Indeed, whereas Man United are six points better off than they were after 10 games of last season, Man City are four points worse off.

Guardiola’s men are beginning to find the sort of consistency we have become used to seeing from them in recent campaigns, though, and they head into this derby on a five-match unbeaten run during which time they have not conceded a single goal.
Only Spurs have beaten Man City in their last 15 games across all competitions, while their victory over Fulham last weekend secured back-to-back Premier League wins for the very first time this season.

Guardiola’s men have now scored as many goals in their last two league outings as they had in their previous seven combined, while they could also keep three consecutive top-flight clean sheets for the first time since May 2019.
There will still be concerns over Man City’s away form, though, having won just once on the road in the league since their opening game of the campaign.

Defeat to Tottenham in their last such outing was their fifth away league loss of 2020 – their most in a calendar year since 2015 – and that includes being beaten by Man United on their last visit in March.
The goals have not exactly been flowing freely either, scoring six and conceding five in their five away outings to date, although that is still significantly better than Man United’s home record.

Solskjaer’s side have netted just three times at Old Trafford so far in 2020-21 which, when coming up against a team with five clean sheets on the bounce, does not bode well in this battle for bragging rights.
The hosts could again be without injured duo of Anthony Martial and Edinson Cavani for this one after both missed out in midweek.
Martial’s absence will be keenly felt, having scored in three of his last four league appearances against Man City including both home and away last season. If he does start, the Frenchman could become the first United player to net in three consecutive league derbies since Eric Cantona.

Solskjaer must decide whether or not to start Paul Pogba, who has now scored in back-to-back games but also drew more negative attention to the club this week with his agent’s comments over his future.
Luke Shaw is now fit again but may have to settle for a place on the bench for the derby, with Solskjaer set to return to a four-at-the-back system.

Aaron Wan-Bissaka is expected to start on the opposite flank as he renews his eye-catching head-to-head with Raheem Sterling, who is still searching for his first goal against Manchester United in what would be his 17th attempt.
Guardiola has confirmed that Sergio Aguero will not start this match despite a goalscoring return in midweek, meaning that Gabriel Jesus is expected to lead the line again.

Kevin De Bruyne, Rodri, Ruben Dias, John Stones, Ederson and Benjamin Mendy are among the other players who will likely come back into the starting lineup for this match.
Eric Garcia and Ilkay Gundogan were both forced off in midweek, though, and they will need to be assessed ahead of kickoff this weekend.