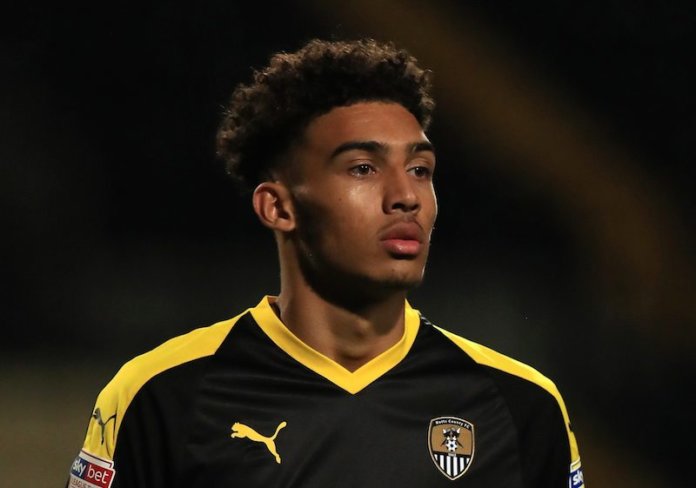 Since joining Tottenham two years ago British-born Nigerian forward, Kion Etete has continued to impress in Premier League 2. However, playing alongside the ‘big boys’ has been his ultimate aim
In what could be akin to Spurs’ success with the like of Dele Alli, the North London club welcomed Kion Etete for a period of trial and the lad is now making the best of the opportunity, as Etete impressed Tottenham technocrats, who had good marks for him after a week’s trial with the English Premier League club. All fingers now point in the direction of a repeat of the Alli saga for Etete.

Nigerian-eligible striker Kion Etete scored for the third consecutive Premier League 2 game as Tottenham Hotspur defeated Blackburn Rovers 3-2 on Monday night.
Etete opened his account for the season against Manchester United before making it two goals in two games with his strike against Leicester City at the end of last month.
The former Notts County wonderkid gave Tottenham the lead at Lancashire FA HQ when he tapped home at the back post in the third minute.

Tottenham made a move for Notts County’s pacy teenage forward after a week’s trial with the Premier League club.
Etete signed a professional contract with Notts County on his birthday in November. That came just weeks after being handed his first team debut, by then manager Harry Kewell, as a 16-year-old in the Checkatrade Trophy against Newcastle in October.

He was linked with city rivals Nottingham Forest and went on to make six first team appearances for the League Two strugglers.
“Being around the first team has been a great experience for me and now I’m just going to be doing all I can to show the new manager what I can do,” Etete told the club’s website.
“Under-23s matches will give me the chance to prove myself against older players from a higher level and I can still play for the Under-18s, which will keep me up to speed.”

The lack of a second striker has cost Tottenham valuable points over the past few years. This past season saw Kane out injured for 67 days, missing 14 games, after rupturing his hamstring tendon in a 1-0 loss at Southampton on January 1.
Rewind to last season and the same player suffered two major injuries, accumulating 91 days and 17 games out.
Daniel Levy has tried to bring in an understudy on more than one occasion with Vincent Janssen and Fernando Llorente both failing to contribute significantly.
The likes of Heung min Son, Lucas Moura, Steven Bergwijn, and Dele Alli have all also been used in the central role as makeshift front men.

Troy Parrott has been touted by many as the next ‘Harry Kane’, but supporters should perhaps keep an eye on a former football league striker in the youth squad instead.
Etete came through the ranks at Notts County before making his senior debut in the EFL Trophy in 2018. The 19-year-old went on to feature four times for the first team.
This caught the eye of the hierarchy at Tottenham Hotspur and he underwent a successful trial at the North London club before joining in June 2019.

Etete has featured 21 times for Spurs youth teams – under-18s and under-21s – scoring nine times in all competitions. This season has seen him feature in the Premier League 2, Under-18 Premier League, UEFA Youth League, FA Youth Cup, and also EFL Trophy
However, it has been in the under-18 domestic league where he has shown the most promise after scoring eight times in 13 appearances.

According to Talents Hunter, Etete could be the ideal striker for Jose Mourinho.
Regarded as ‘tall’ and ‘physical’, Etete has the ability to shield the ball and involve other players around him. Standing at 6ft 3in, he knows how to score with his head, but also has a venomous right-foot on him, making him lethal inside the box in any scenario.

Not only does his attacking presence cause defenders problems but also his willingness to close down the ball and force the opposition into errors.
Mourinho loves a target man and Etete could be the perfect striker to fill this void. However, like any youngster trying to make an impression, experience is key and only making four appearances at a senior level might not be enough to force Mourinho’s hand.
At the moment, Parrott is rated highly due to goalscoring presence in the youth teams but don’t rule out Etete being a leading Premier League striker in the future, potentially at Spurs.

It will be no surprise if Spurs are on the hunt, once again, for a back-up striker to Kane. However, Daniel Levy himself could save himself millions by looking to the youth squad with two promising strikers on the rise.

Etete came through the youth team at Notts County and made his senior debut for the “Magpies” in a group stage match of the EFL Trophy against Newcastle United U2. He made his EFL League Two debut in a 2–2 draw with Port Vale and after the game he said “I was nervous because it was a big occasion and I just wanted to keep my head on the game”.
His manager said afterwards, “Kion was excellent”.
Derbyshire-born Etete has stated that it would be an honour to represent Nigeria if his Nigerian dad and English mom give him the green light.