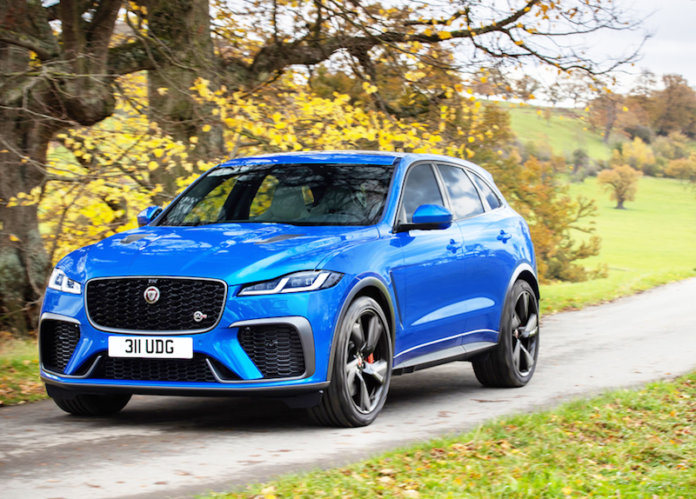 The new Jaguar F-PACE SVR is now faster, more dynamic and more refined than ever. The pinnacle of the performance SUV range is elevated to another level thanks to the latest enhancements by the Jaguar SV team.

The updates are delivered by a combination of new hardware and the move to Jaguar’s advanced Electronic Vehicle Architecture – dubbed EVA 2.0 – and include motorsport-inspired design details, a luxurious and performance-focused interior and the latest connected convenience technologies.

The new F-PACE SVR is available exclusively with Jaguar’s 5.0-litre V8 Supercharged petrol engine, which produces 405kW and 700Nm torque – an increase of 20Nm. This uplift in torque delivers enhanced performance, with the F-PACE SVR capable of accelerating from 0-100km/h in 4.0 seconds, three-tenths faster than before, and a top speed of 286km/h.

The powertrain now features the same torque converter used in the Jaguar XE SV Project 8 super sedan , to withstand the higher loads produced. As well as the improved torque and acceleration, CO2 emissions are reduced from 281g/km to 275g/km with fuel economy now down to 12.2l/100km*.

The transmission and dynamics systems have also benefitted from incremental tweaks. The uprated Dynamic mode features unique tuning, delivering a focused and honed driving experience. A new Dynamic Launch feature also uses driveline inertia to maintain power to the wheels during gear changes, contributing to the SVR’s sharper acceleration from a standstill. At the same time, F-PACE SVR is now more comfortable and enjoyable to drive at a relaxed pace, without compromising its high-speed dynamics, further underlining the new model’s duality of purpose.

The steering system is enhanced with a new electronic power-assistance system delivering greater immediacy, providing a heightened connection between the vehicle and driver. Modified tuning of the adaptive damping provides a more refined ride at low speeds, which is further improved by revised chassis bushes.

Drivers also benefit from improved brake feel in the new F-PACE SVR. The 395mm (front) and 396mm (rear) two-piece disc brakes are now supported by a new Integrated Power Booster which, along with a recalibration of the system, delivers a sportier and shorter brake pedal. This tuning is specific to the SVR performance flagship, while the brake system uses a new electric booster system. The improved cooling and aerodynamics of the vehicle also improve the performance of the brakes, giving the driver even greater confidence.

Jaguar’s All-Wheel Drive with Intelligent Driveline Dynamics is fitted as standard. Adaptive Dynamics suspension technology ensures a precise, dynamic set-up coupled with a supple ride, while Configurable Dynamics provides enhanced driver appeal by enabling the driver to set up the vehicle to suit their personal preferences. A stopwatch, G-Meter and pedal graph also help the driver to monitor performance in Dynamic mode.

The design of the new F-PACE SVR is inspired by SV’s motorsport experience, with enhanced airflow and aerodynamic benefits delivered through new apertures and vents for improved powertrain and brake cooling. The changes deliver superior aerodynamic performance including 35 per cent reduction in aerodynamic lift, while drag is cut from 0.37Cd to 0.36Cd. As well as the performance enhancements, these elements also provide a more purposeful aesthetic.

The interior of the new F-PACE SVR is comprehensively redesigned, with materials enhanced to heighten the dynamic character of the revised cabin and its controls.

Seat and door inserts are finished in Alcantara, with elements such as the central cubby and leather midroll wrapped in luxurious Windsor leather. The 12.3-inch HD Interactive Driver Display is wrapped in Alcantara with ebony stitching, while aluminium patterned finishers feature as standard with open-pore carbon-fibre available as an option.

Optional slimline semi-aniline leather sports seats with heritage logo-inspired diamond embroidery across the front shoulder section, feature a unique perforation across the backrest, while the same pattern is used on the leather on the seatbacks. An embossed SVR logo on the headrests adds a final flourish.

The new Jaguar F-PACE SVR will be launched in sub-Sahara Africa in the first half of 2021 with pricing available from respective retailers. All Jaguar vehicles come with a standard 5-year/100,000km Jaguar Care Plan and warranty.

Meanwhile, the new Land Rover Defender has been bestowed with two further globally-recognised awards being named overall Car of the Year while also securing the Unstoppable Force award in this year’s coveted TopGear.com Awards.

Judges of the prestigious prize praised the new Defender for being one of the toughest vehicles on the road today, and a brilliant successor to the original iconic Land Rover, as a car for the 21st century that performs brilliantly everywhere.

Jack Rix, Editor, Top Gear Magazine said: “Car of the Year is an accolade won by only the very best of the best. We recognise that replacing an icon is an unenviable task, and one Land Rover rightly took its time to get right.

“We’ve now driven one across the Namibian desert – and in properly harsh environments, like the M25 – in both 110 and 90 forms, with every engine under the bonnet and it just performs brilliantly everywhere. There’s an argument that because it costs a bit more it won’t be used properly by the farming and rural community, but that doesn’t mean it couldn’t be… It’s the toughest, most capable off-roader we’ve ever tested, but one that’s a refined, well-equipped family car around town. “Congratulations to everyone at Land Rover.”

Nick Rogers, Executive Director, Product Engineering, Jaguar Land Rover said: “It’s an absolute honour for us to receive Top Gear’s Car of the Year award for our New Defender. Right from the start of creating this vehicle with the blank sheet of paper, we were obsessed about respecting its heritage and keeping its true authenticity, as well as ensuring it is completely fitting for today’s ever-evolving world. We have worked tirelessly to deliver a vehicle that has incredible off-road capability, as well as on-road poise and driveability. Additionally, we have ensured that the New Defender is completely connected, with our new Electrical Vehicle Architecture (EVA2), Pivi Pro infotainment system and Software Over the Air (SOTA) updates to continually enhance the Defender operating system.

“We are especially proud of this recognition from Top Gear, which is a testament to the dedication of our JLR Family who have created a vehicle that we believe is truly worthy of the Defender name.”

To celebrate the achievement, Land Rover teamed up with Top Gear magazine to prove the new Defender worthy of the ‘Unstoppable Force’ title. The ultimate strength test was designed to prove-out the structural toughness of the Defender’s D7x aluminium platform by suspending three un-modified 110s from a crane solely through their towing eyes.

The test which took place at the Gaydon proving ground in Warwickshire subjected the first Defender 110 to over eight tonnes through the structure with each Defender featuring the optional Adventure Pack and additional optional equipment.

Top Gear’s Tom Ford said: “We wanted to prove that Land Rover’s new Defender really does live up to the hype and had to test it in typical Top Gear fashion. What better way to let me loose with a 150 tonne crane, three Defenders and a rope?”

With over 30 global accolades to date for the new Defender, the Top Gear prizes are among a string of prestigious awards that the Land Rover Defender has taken home in 2020. Notable awards include Motortrend’s 2021 SUV of the year, Autocar’s Best SUV 2020 and Parker’s Best Off-roader.

The New Defender has been through more than 62,000 tests for engineering sign-off, while the chassis and body architecture have been engineered to withstand Land Rover’s Extreme Event Test procedure – repeated and sustained impacts, above and beyond the normal standard for SUV and passenger cars. With the latest New Defender, the Land Rover Defender family now encompasses the Defender 90 and Defender 110 both with the option of petrol and diesel engines along with advanced plug-in hybrid and mild-hybrid powertrains.